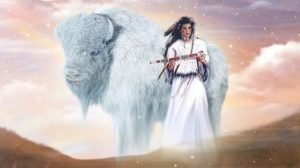 According to one of the most popular versions of the legend, the White Buffalo Calf Woman appeared to the Lakotas when Maka, Mother Earth, was in turmoil.

She taught the tribe sacred ceremonies, songs and dances. She gave them the Sacred Pipe and told them about its symbolism. She said that a white buffalo calf would announce her returning to Earth, bringing peace and harmony to the people.

Several have been born in the past decade and a half Is the Lakota legend something spiritual, paranormal, myth or a combination thereof?

A long time ago, when two warriors were hunting buffalo in the sacred Black Hills of South Dakota, a white buffalo calf appeared. As she approached them, she turned into a beautiful maiden.

One of the braves offended her by his improper thoughts. She beckoned for him to come to her. As he did, a black cloud covered him and, when it lifted, only his bones were left.

She told the other brave to tell his people that she would appear to them in four days to gift them with a Sacred Pipe. 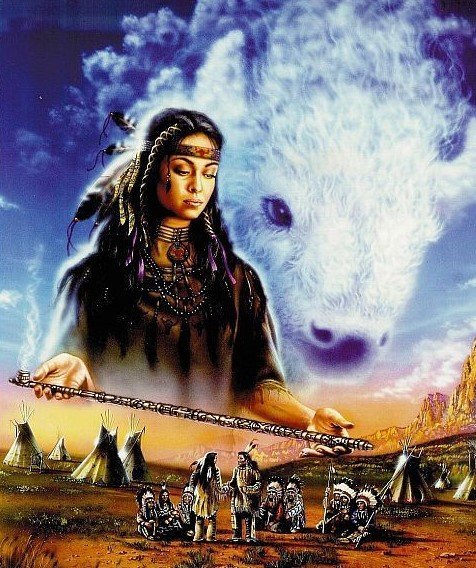 She appeared as a white buffalo calf floating on a cloud, then stepped onto the ground. She rolled over on the earth, changing from white to black, then yellow, then red, the colors of the Lakota medicine wheel.

When she stood up, she was a beautiful maiden. She spent four days with the people, teaching them sacred songs, dances, ceremonies and traditional ways.

White Buffalo Calf Woman taught them to be conscientious caretakers of the land and to be aware that children are the people’s future. She told them that she would return to bring peace, balance and spirituality to the world.

Before she left on the fourth day, she told the people that a white buffalo calf would presage her arrival. She placed the Sacred Pipe in their guardianship.

Chunupa Wakan, Sacred Pipe, was made by Great Spirit, Wakan Tanka, for the Lakota. The smoke rising from the stone bowl was, Grandfather Mystery’s, Tunkashila’s, living breath.

Its stone represented the buffalo, symbolizing the universe and the four directions, because buffalos have four legs. The wooden stem of the chanunpa symbolized all that grows on the earth.

Twelve eagle feathers hanging from the pipe, sacred to Wakan Tanka, represented the connection to the Divine. The eagle is the Shamanic symbol of renewal.

The American buffalo/ bison is symbolic of prayer and abundance. The animals gave the Lakotas the gift of life, providing food, shelter, clothing and other necessities for survival, by sacrificing their lives.

Prayers of gratitude were offered to Wakan Tanka before buffalo hunts. After the hunts, ceremonies were performed that honored the buffalos’ spirit. Gratitude was given for all they provided 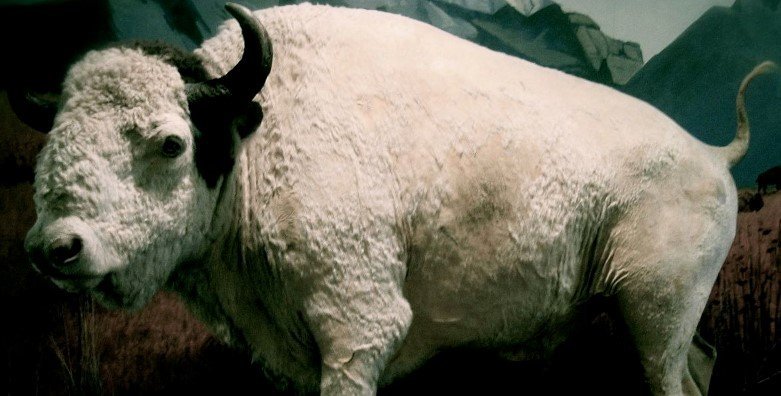 Miracle, the Sacred White Female Buffalo Calf, was born in the Heider farm near Janesville, Wisconsin on August 20, 1994. Her eyes were brown, as was the tip of her tail, so she wasn’t an albino. Dave Heider called a journalist friend to report the story. The media saw the item and carried news reports about the calf.

The Heiders didn’t know about the White Buffalo Calf Woman until thousands of AmerIndians and other people flocked to their farm to see the sacred white calf. The Heiders viewed Miracle as a special gift who belonged to all people.

They opened their farm to visitors who could see her at the pasture fence to offer prayers, without charge. Miracle died on September 19, 2004. Visitors are still welcome to come pray and/or pay their respects by her grave.

On May 9, 1996, Medicine Wheel was born on Joe Merrival’s ranch in the South Dakota’s Pine Ridge Reservation and was revered as Miracle was. On the night of March 27, 2000, she was shot and killed by law enforcement when she escaped from her pasture and was wandering on the reservation’s streets.

AmerIndians believed this symbolized that things would get worse before there was improvement.

Will the Prophecy of the White Buffalo Calf Woman be Fulfilled?

Maka is still in upheaval as evidenced by a rash of recent earthquakes, tornadoes, hurricanes, cyclones, floods and financial and other disasters. There are global major and minor wars, terrorism, civil unrest and crime. It appears that the world situation has worsened since 2,000.

In addition to Miracle and Medicine Wheel, other white buffalo calves have been born. Most have died soon after their birth and those who survived haven’t reached fame.

According to Lakota belief, time in the spiritual world is different from the mundane. Will the White Buffalo Calf Woman’s prophecy become total reality?