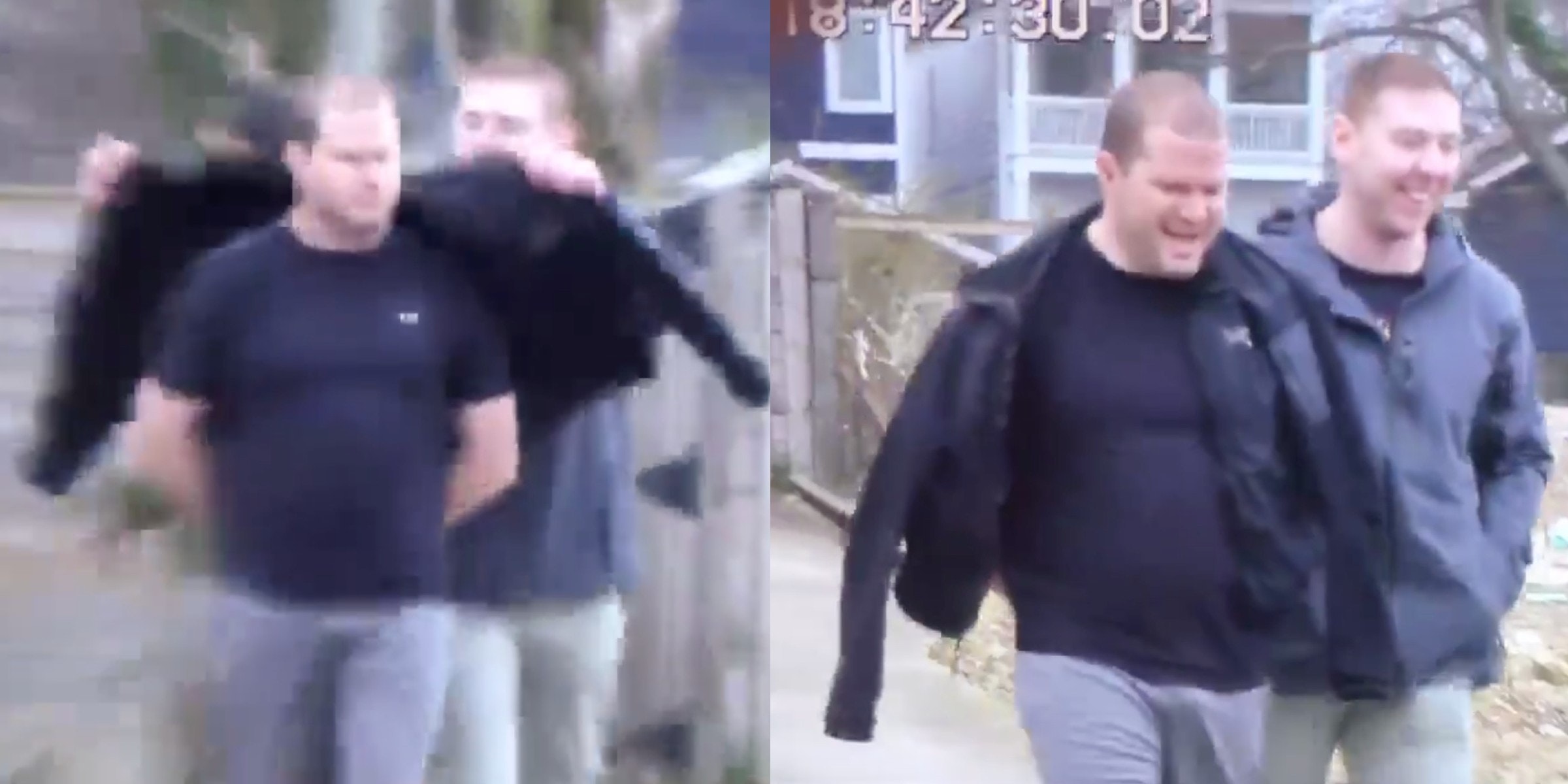 A new video shows an FBI officer escorting out a man who is allegedly connected to the Capitol riots. In the video, the officer puts on a jacket over the handcuffed suspect’s shoulders. The officer and suspect—who are both white—appear to chat and laugh.

Rebecca Cardenas, a journalist at WSMV-TV in Nashville, Tennessee, posted the video of the arrest on Sunday on Twitter, sparking a conversation on the level of white privilege the man’s arrest shows.

“This is the whitest arrest I’ve ever seen,” liberal blog Palmer Report said in a tweet that got more than 7,700 likes.

This is the whitest arrest I've ever seen.

“Actually, no. The ‘whitest arrest’ consisted of a stop at Burger King,” a user wrote in response, “This is a close second.” The comment references the arrest of Dylann Roof, who got a Burger King meal in police custody after he carried out a mass shooting at a Black church. (It’s a common misconception that police took Roof to a Burger King location.)

Many have remarked on the treatment of Roof and the so-called “QShaman,” whose demands for organic food in prison were met, since the Capitol insurrection, where many of the attackers were white supremacists. The way police have treated white insurrectionists versus the way police treat Black people who are minding their own business angered many.

To some, the clip that Cardenas shared didn’t even look like an arrest.

I was waiting for the part where the arrest was going to start, and then I realized it was already happening when I saw the handcuffs

“Good thing he didn’t kneel during the Anthem,” wrote another user, a reference to former NFL quarterback Colin Kaepernick and the vitriol he faced for his silent protest against police brutality on the Black community.

Storm the Capital
Participant in multiple homicides
Get to leave unscathed
Yuck it up w/the feds during the perp walk
Takes a ride in an unmarked Jeep.
Good thing he didn’t kneel during the Anthem.

Others pointed out the glaring disparity between how the white riot suspect was treated and how George Floyd, a Black man suspected of using a counterfeit note, was killed by police.

That’s because he wasn’t selling cigarettes or passing fake twenties of sleeping at Wendy’s parking lot. Then we taze or shoot or strangle

White privilege: arrested gently (with smiles) after engaging in an insurrection.

Many were also outraged that the officer respectfully placing a jacket on the suspect, a stark contrast to a December case of a Black woman who was handcuffed naked by cops while being wrongfully detained.

In 2019, police officers bombarded the Chicago home of Anjanette Young, who was changing clothes, and did not properly cover her despite repeated pleas. Body camera footage of the incident surfaced in December, and the memory is fresh in many people’s minds.

“Why cover him at all?! Also they never afforded that to the lady in Chicago,” one user wrote in response to Cardenas’ video.

I’m thinking about the Black woman whose home was mistakenly raided and she was handcuffed BUCK NAKED and left that way for 20 minutes until someone wrapped her in a blanket (partially). She was utterly terrorized and is of course suing. Took 2 yrs to get the video released.

Others compared the Capitol riot suspect’s arrest to police’s treatment of peaceful protesters. The Guardian reported last week that according to one study, the U.S. police force uses three times more force on left-wing protesters than right-wing protesters.

They sure do treat white people very differently than people of color getting arrested.

Some tagged the FBI’s Twitter account and commented sarcastically that the officer and the suspect appeared to be friends or even related.

Just love the tender loving care displayed, the joking around with the white boy insurrectionists. Jesus @FBI–you have a problem in your ranks, do better.