The Lion King 2019 IMPROVES One Important Scene From The Original 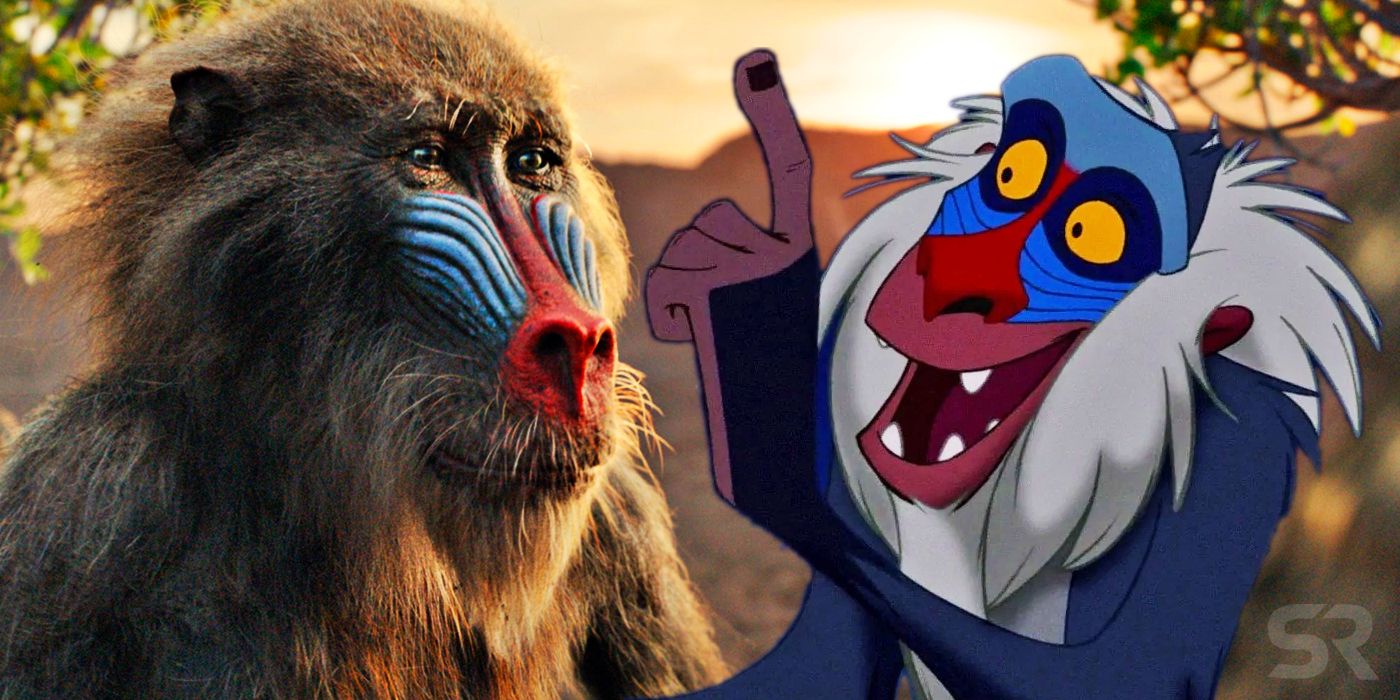 The way in which Rafiki (John Kani) learns of Simba’s (Donald Glover) survival is better in the remake of The Lion King than in the 1994 animated classic. The Lion King is widely regarded as one of Disney’s best animated movies, if not one of the greatest of all time. As such, director Jon Favreau’s hyper-realistic remake has been a controversial prospect for many moviegoers, who have hoped that it justifies its existence by offering something new, whilst simultaneously respecting the original, powerful tale. Favreau largely recreates the classic film’s story and songs frame-by-frame, but he still manages to update various elements. One of his most significant changes centers upon the simian shaman’s growing connection with Simba – and it is a big success.

Indeed, in the original Lion King, Timon (Nathan Lane) and Pumbaa (Ernie Sabella) hurt the young lion’s (Matthew Broderick) feelings by tactlessly ridiculing his father’s (James Earl Jones) theory about stars. Dejected, Simba flops down upon a clump of flowers, which creates a cloud of dust and seeds (that, allegedly, spelled out the word “sex”). Carried by the wind, these spores travel back to the Pride Lands where they are intercepted by Rafiki (Robert Guillaume) who determines that the true king lives on via mystical means. Filled with hope once again, Rafiki sets off to convince the conflicted noble to retake his homeland.

Related: Disney Changed The Lion King In 2002 (But Nobody Noticed)

Favreau’s remake of The Lion King may largely begin and end in the same way for Rafiki and Simba, but the circumstances of their eventual meeting change considerably. Instead of flower petals traversing the desert, it is a loose clump of Simba’s mane that takes flight. Yet here, it does not soar directly to Rafiki’s fist. The 2019 movie contains an extended sequence where the fur passes through a series of new owners; a bird uses the hair to construct his nest, before his mate discards it. Caught in the branches of the tree, Simba’s down is eaten and digested by a giraffe, whereby a dung beetle unwittingly maneuvers it through the desert. Later, the fibers come loose and are found by wood ants that carry the clump past an intrigued Rafiki, who soon recognizes its owner’s scent. 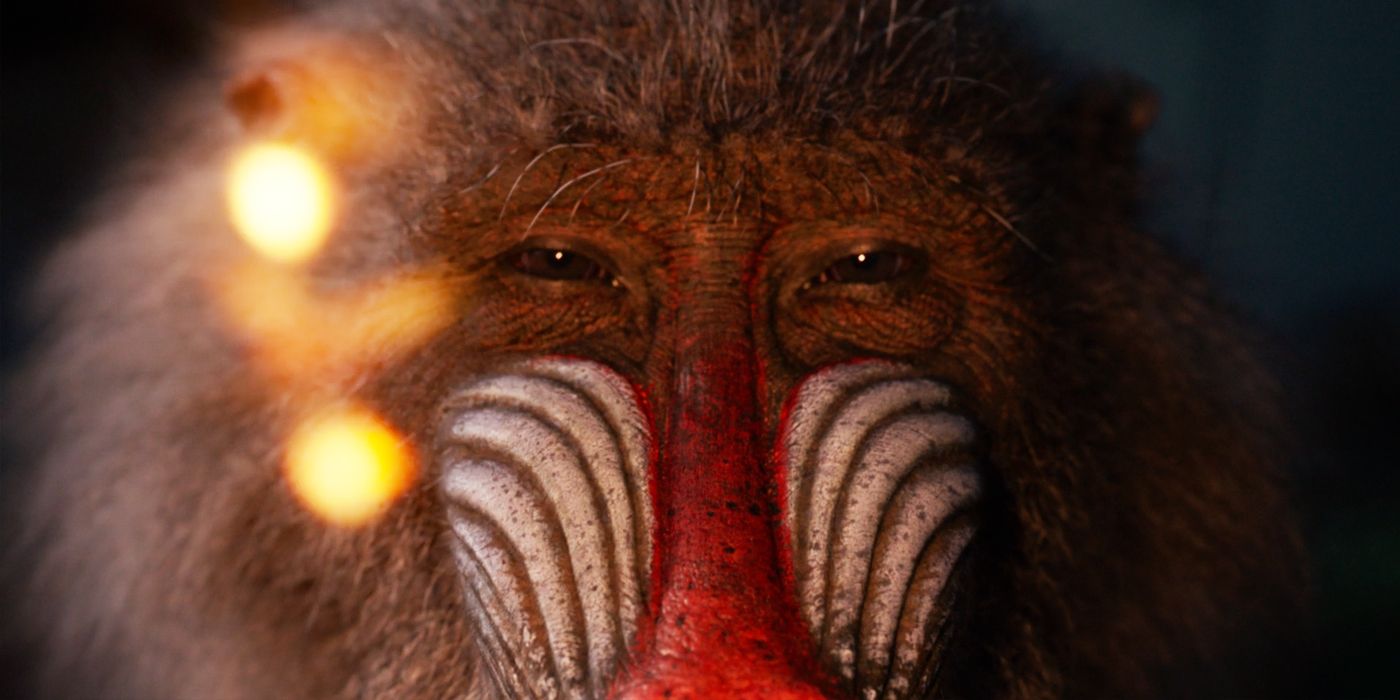 These new scenes are not just successful because they showcase the film’s stunning animation – or because they’re more realistic, and therefore complementary to the remake’s aesthetic. Indeed, some fans will dislike how the new The Lion King downplays Rafiki’s mysticism through this sequence. Yet in doing so, Favreau actually reinforces the story’s larger themes in a simple but effective way.

Both versions of The Lion King follow Simba as he wrangles with his destiny as King of the Pride Lands. However, even at his saddest point in exile, fate is working to put Simba back on the throne by alerting the one animal who can guide him back. But Favreau’s The Lion King really underscores the strength of Simba’s connection to Pride Rock by having numerous instances that could have inadvertently halted the sign to Rafiki that the prince is still alive. The odds of the hair making it all that way are surely astronomical, and that’s the point.

Furthermore, the fact that Simba’s fur is eaten and utilized by creatures great and small keys into the film’s most crucial message. Earlier in The Lion King, Mufasa takes great pains to educate Simba about the natural order, and how he must respect and prioritize other creatures over his own whims when he is king. Though Simba initially wishes to change things up, he soon realizes how mistaken he is – especially after the barren wasteland of Scar’s (Chiwetel Ejiofor) reign exemplifies the results of selfishness and indifference to others. As such, the added relay of Simba’s mane cleverly denotes the power of intended (and unintended) actions, and literally displays the interlinked Circle of Life in action. Indeed, Simba (or part of him) is both master and subject in this journey, whether he likes it or not.

Related: The Lion King’s Beauty And The Beast Reference Is The Movie’s Worst Moment

A common criticism of Disney’s live-action remakes is that changes and embellishments often deviate and harm their original plots, such as the addition of Prince Anders (Billy Magnussen) in Aladdin and Belle’s (Emma Watson) visit to Paris in Beauty and the Beast. Mufasa’s amended death – and the inclusion of Timon’s (Billy Eichner) meta movie reference – are similarly debatable alterations. However, Jon Favreau’s new sequence for Simba and Rafiki successfully enhances The Lion King’s central subtext and bolsters an already stellar story.

Next: All The Live-Action Disney Remakes In Development