Sublime States: both the method and the goal

What if the goal and the method were the same thing? Meaning, the desired benefit of your practice and the WAY you practice are actually the same. It’s an age-old idea, but does it work? Well, the answer can be found in a set of traditional concepts called the Brahmaviharas.

Literally translated as “Divine Abodes,” the Brahmaviharas date back to the late Upanishads and early forms of Buddhism. Yogis know these practices through Patanjali’s “Yoga Sutra” 1:33, where they’re cited as foundational to any spiritual practitioner.

According to this teaching, there are four loving qualities in which we can abide, but it’s going to take practice to get there. Although seemingly lofty, these concepts are just like anything else. To get better at them, we have to put in the work. 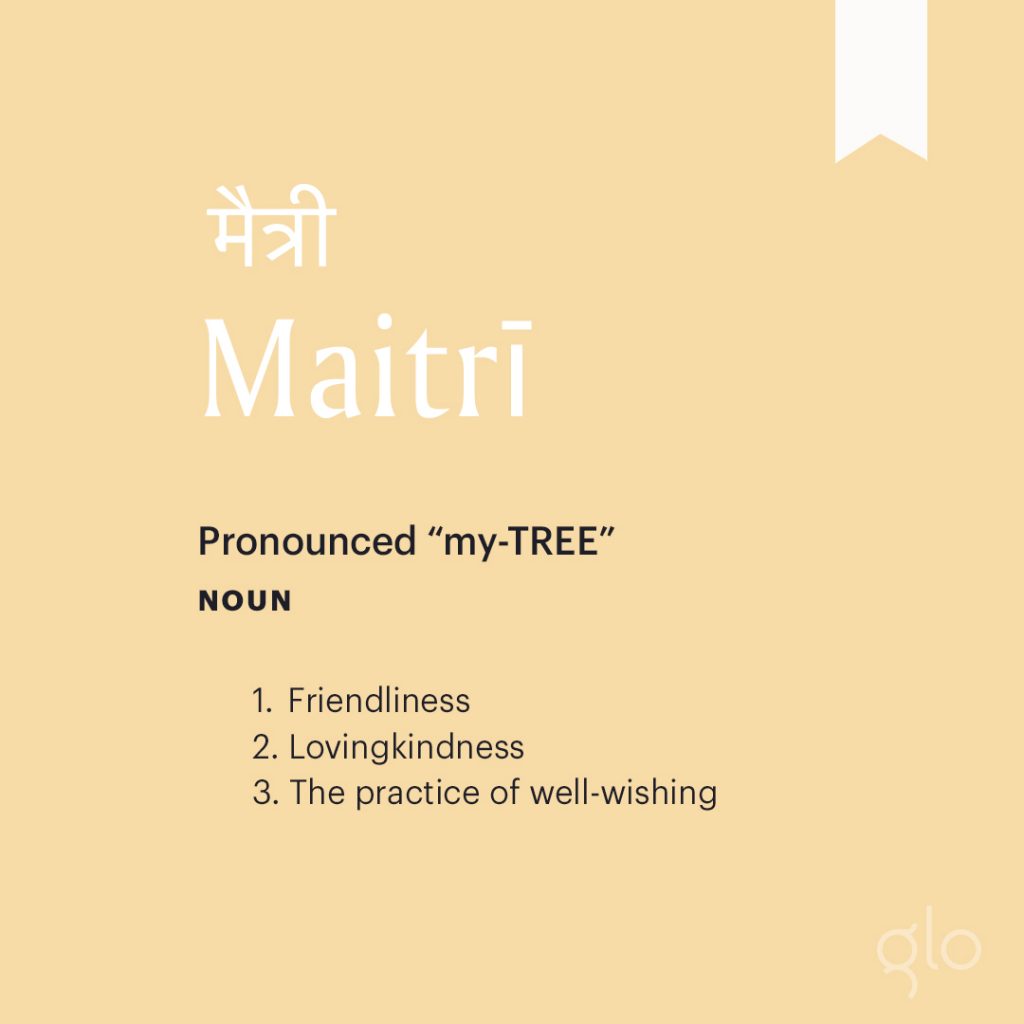 Translated as “friendliness,” in Sanskrit, maitri is interchangeable with the Buddhist practice of metta, or “lovingkindness.” The idea is that very often our thoughts are less than friendly or loving. We get triggered, we feel slighted, we get annoyed at our friends, families, co-workers, and world events—but mostly at ourselves. Then we get frustrated at ourselves for feeling frustrated, and that can leave us ensnared in a pretty bad mood.

The next time you feel triggered, try to meet it with metta. It doesn’t require that you perfect the feeling, just practice it with the idea that in time you’ll get better. Here’s how:

Sit comfortably, close your eyes, and take a few deep breaths. Become aware of your body, your breath, and the state of your emotions, then set an intention to develop the power to focus your mind and energy to a place that will be of service to you and the world around you. Knowing that intentions take action to come to fruition, dedicate the next 5 minutes to simply evoking lovingkindness and sending it to…. 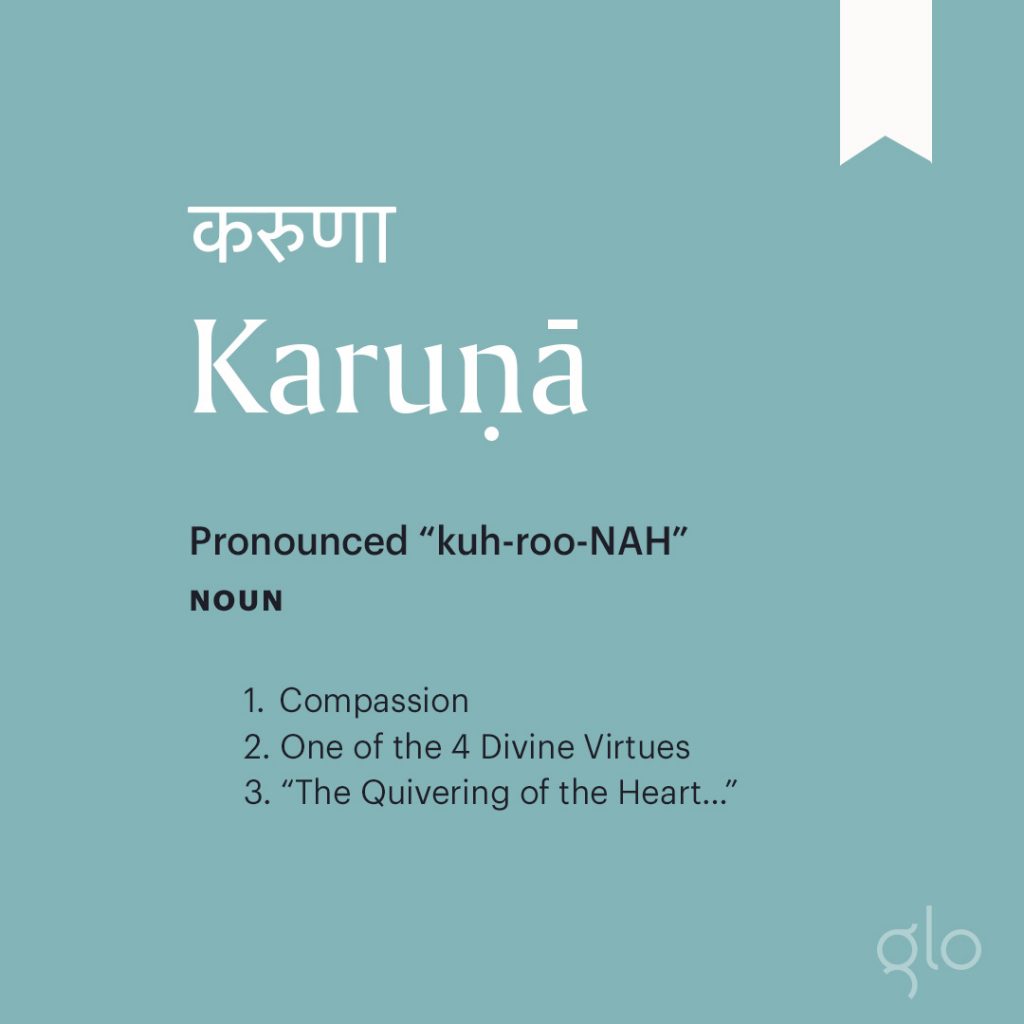 You know that “pull in the chest?” The feeling you get when your heart goes out to a family member?  When you experience something bittersweet or watch the hero falter in a movie? Well, thousands of years ago, yogis actually named that feeling. They poetically called it karuna, “The quivering of the heart.”

For those who prefer things a little more direct, karuna simply means “compassion.” From the Sanskrit, “kara,” meaning “to do” or “to make,” karuna is the tugging in the heart when we feel what someone else is feeling.

You might equate karuna with empathy, understanding, or even humanity, but it should not be confused for sympathy, condolences, or pity. While compassion and empathy allow us to feel “with” a person, sympathy and pity occur when we are feeling “for.” With the latter, we run the risk of ascribing our own judgments to the situation; deciding that something is bad when it is not our decision to make. But karuna is meant to be unattached to the result, so it precludes labeling anything good or bad. Through the simple act of sharing someone else’s feelings, we can experience the interconnectedness of all beings.

Allow yourself to “feel with” someone who is presenting a challenge with Sally Kempton’s online meditation, Making Peace in a Relationship. 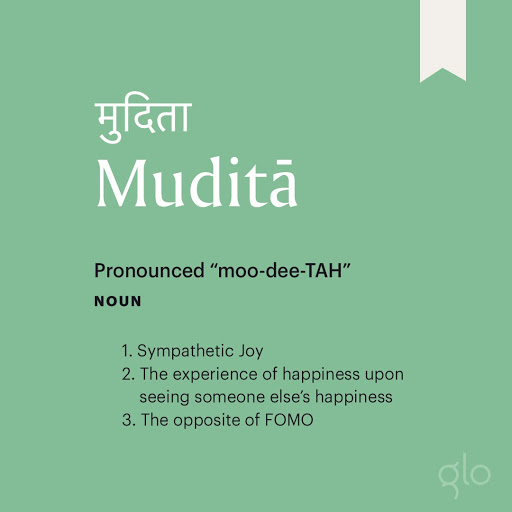 Being a little fake is not always the worst thing. If you’re dwelling in a negative headspace and just can’t seem to get yourself out, go ahead and “fake it till you make it.” Though it’s been given a modern spin, this mindset was actually introduced thousands of years ago in a concept called the pratipaksa bhavanas, or the practices of cultivating the opposite. The idea is that when we encounter a not-so-comfortable feeling, sometimes just a few rounds of practicing the opposite feeling can kick us onto a different track.

Mudita, or sympathetic joy, is the practice of feeling happiness at someone else’s happiness.  Rather than giving in to envy, mudita reminds us that we are all connected, and we honor that connection by celebrating someone else’s success. If we limit ourselves to being happy only when we ourselves are succeeding, we limit our opportunities for feeling good. But if we allow ourselves to feel elation for those around us, we have so many more chances to feel our best!

The next time you’re feeling envious, give it a try. And if mudita doesn’t make you feel great, well…fake it till you make it! David Wagner’s Web of Love online meditation will get you started. 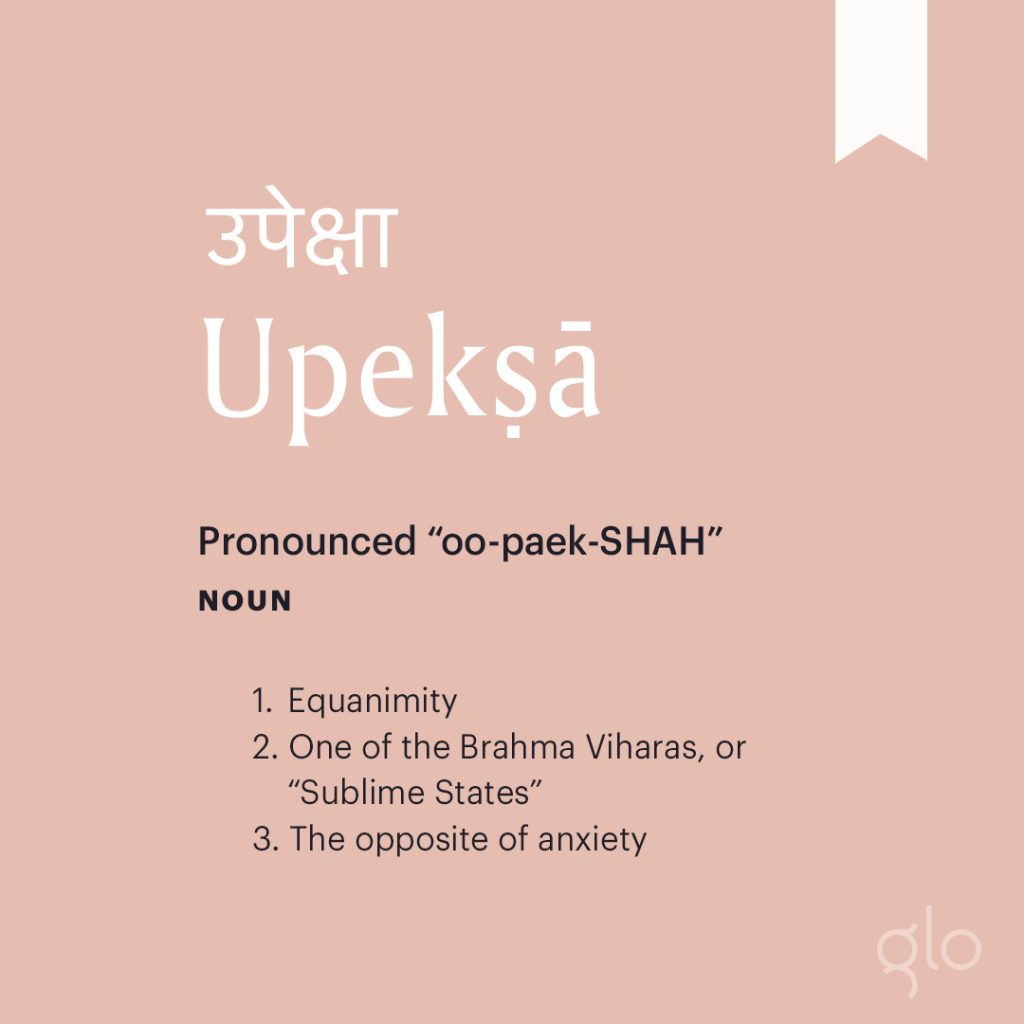 We do have some choice over how we surf the waves of our lives. The ability to navigate the ups and downs, the power to pause and not just react, the practice of breathing through an uncomfortable moment—all require effort. Equanimity’s steady composure is not something that comes easily, but if we keep showing up to do our inner work, we can get glimpses.

Many dedicated yoga students are familiar with these Divine Abodes, as they are found in the popular “Yoga Sutras of Patanjali.” It’s interesting to note that in his text, Patanjali presents the word as upeksa, with a long “a,”  which indicates a feminine, rather than masculine declension. This was not necessary and no accident either. Patanjali chose the feminine as a nod to the historical Samkhya Philosophy, which described an eternal play between masculine and feminine energies. While the masculine is represented by consciousness and the feminine is embodied by matter, it is only when the feminine SEES HERSELF that actualization happens.

The divine state of equanimity is found when we see ourselves as we truly are and accept it. From there we can find ourselves whole.

What’s so compelling about the Brahmaviharas is that at first glance, they seem unattainable. Sure, we’d love to be all these things all the time, but life…life just gets us sometimes. The Brahmaviharas teach us that in order to be these things, we must practice them. It’s truly the only way.

How can you be more compassionate? Well, during the midst of your frustration or impatience, you actually stop and try—that’s right, just try—to be more compassionate. How, instead of feeling jealous, can you genuinely feel happy for someone else’s success? By taking baby steps and starting with just one person, one instance.

This is the reason that the teachings of yoga and meditation are called PRACTICES. We’re meant to practice again and again and just when we think we’re not making progress, our practice shows up in the most unlikely ways. Maybe you’re a bit kinder to the garbage truck driver who is blocking your exit from your driveway. Or instead of getting jealous of a friend who gets to go on a great trip, you’re excited to “like” her pictures. And the next time you’re at work about to lose your marbles, because you’ve practiced upeksa so many times, remaining calm and centered comes naturally.

As we’re all beginning a new decade and asking ourselves the big questions, it’s important to reevaluate how we’ve invested our time and reexamine our value systems. What differences do you really want your practice to make? Is your practice working for you and those around you? Is it working for the greater good? If you can answer yes to any of the above, you’ve most likely been practicing the Brahmaviharas all along.

Ready to invite the Sublime States into your practice? We suggest the following classes:

Holding Onto the Fruits of Practice with David H. WagnerMeditation – 30 min