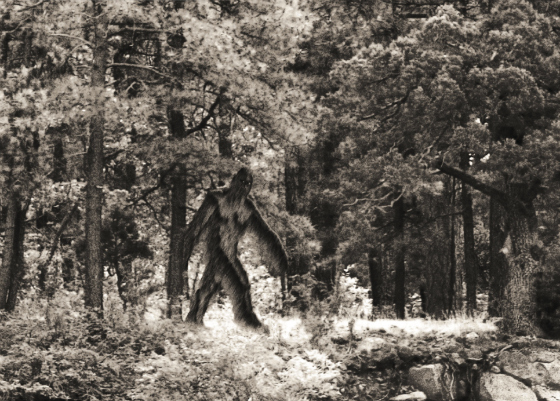 An Alaskan girl is camping with her friend and the friend’s father. She hears the heavy steps of a biped circling her tent during the night”Growing up, I had a childhood friend that lived relatively close by and we were like two peas in a pod. We both were adventurous, believed in the paranormal, enjoyed astronomy and generally just being outside. She was born in Alaska and her dad had lived there for quite awhile so they were always into camping, hiking, fishing, skiing, you name it. It was with my friends family that I got introduced to fishing and did a lot of camping.This happened during the mid to late nineties and we were maybe around 10-12 years old (it’s been awhile so I can’t remember exactly).One camping trip, we went to this lake in the forest that was surrounded by a meadow and feeding the lake was a small stream leading out of the woods. Anyway, we played in the meadow and stream all day while my friends dad fished. The lake wasn’t very big and because it had a meadow all around it, he could keep an eye on our whereabouts while he fished. While messing around by the stream, the wooded area gave me weird vibes. I Can’t explain it, I just felt really uneasy.Anyway, the day faded away into early evening and it was time to leave and find a camping spot. My friends dad packed up his fishing gear and we all walked back to the truck on this long, winding path through the woods. Once in the truck, we drove into a more remote area of the forest and made our way up this steep road that was so rough, and at such an incline, that I was convinced that my friend’s dad was going to break his truck. He had a four, maybe six cylinder, Toyota pickup that was about as basic as a truck could get. In fact, I’m not even sure if the truck had four wheel drive, but being an Alaskan outdoorsman with years of experience, I trusted him.We finally made it up to the top which was flat and relatively open with a big area of forest in the opposite direction from the road we drove up. We pitched our tents, got everything set up and my friend and I decided to go explore the area. We were maybe 50 yards from the tent when we heard a big crack as a tree branch snapped in the woods behind us. We got quiet and looked in that direction, but did not see anything. Thinking it was just a deer we brushed it off. As we were walking we heard it again, and whispered to one another about what it could be, but kept going. It stopped briefly and when we were about 200 yards from our camp, we sat on a boulder looking down the steep, wooded hill overlooking the dirt road from where we had come from. Suddenly, we heard another cracking branch from behind. Whatever it was seemed to be following us. Our imaginations going wild, we came up with everything from a serial killer stalking us in the woods to deer to Bigfoot.When we got back to the campsite, we told her dad what we had heard and how it seemed to be paralleling us. He kind of played it off as a black bear and secured all the food. Later on, my friend confided in me that her dad had gotten out his pistol and would be sleeping with it that night. My friend and I were sharing one tent and he was in his own tent not far from us, so we figured everything would be ok.I awoke sometime in the middle of the night to hearing something or someone walking outside. As I lay still listening, I could hear it quietly circling the tent. It sounded like it was walking on two legs because it had a distinct rhythm in how it walked. Whatever it was, sounded big as I could hear its weight (if that makes sense) as it put each foot down and walked. I could even hear relatively quiet but deep, heavy breathing at times. As I lay there listening, I could hear it wandering to the other parts of the campsite and then back to our tent, almost as if it was walking in a big, repetitive loop. This went on for who knows how long, it felt like an eternity. Terrified and unable to wake my friend, I lay there and listened until I eventually fell asleep.The next morning, I told my friend and her dad about it, but I don’t know if they believed me or not. Interestingly, absolutely nothing in the camp was disturbed in any way. The ground was not very soft and in some places was covered in grass, so there were no footprints either.This is something that I have never been able to explain and to this day lingers in the back of my mind when camping. I always wonder what it was that walked around our tent all night.” BD 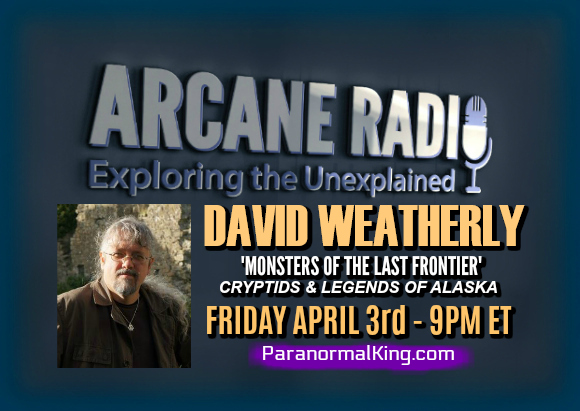 Arcane Radio is LIVE on the Paranormal King Radio Network or the direct link at Mixlr – Paranormal KingFacebook event announcement: David Weatherly – ‘Monsters of the Last Frontier’ – Arcane RadioJoin me as I welcome author, investigator and explorer David Weatherly to Arcane Radio. David is a renaissance man of the strange and supernatural. He has traveled the world in pursuit of ghosts, cryptids, UFOs, magic and more. From the specters of dusty castles, to remote, haunted islands, from ancient sites, to modern mysteries, he has journeyed to the most unusual places on the globe seeking the unknown. David has investigated, and written about, a diverse range of topics including, Hauntings, Cryptozoology, Ufology, Ancient Mysteries, Shamanism, Magic and Psychic Phenomena. He has been a featured speaker at conferences around the world and has lectured for countless paranormal, UFO, and spiritual groups. He is a frequent guest on Coast to Coast AM with George Noory, Darkness Radio and other radio programs. David has also appeared on numerous television shows including Ancient Aliens, Mysteries at the National Parks and Beyond Belief. His latest book is ‘Monsters of the Last Frontier: Cryptids & Legends of Alaska.’ His website can be found at eerielights.com – This should be an interesting & informative show! Join us this Friday, April 3rd at 9PM ET / 6PM PT on ParanormalKing.com or the direct link at mixlr.com/paranormal-king – Meet us in the chat room…just click the banner or go to www.paranormal.olicentral.comListen to our podcast at Arcane Radio on Podbean or on my YouTube channel. You can also listen to the podcast at Arcane Radio on Stitcher – iOS, Android and the Webplayer. Please consider becoming an Arcane Radio patron. Thanks…Lon

Hey folks. I do understand that everyone is tightening their belts during the Covid-19 situation, but I ask that you consider a donation to Phantoms & Monsters. Yes, I do receive some funds through books and advertising, but it is far from enough to cover expenses. If you are interested in helping out, you can use the PayPal donation buttons on the blog and newsletter or go directly to PayPal.com and use my email lonstrickler@phantomsandmonsters.com as the recipient. You can also make a donation through Facebook Messenger. Thanks for your continued support. Lon 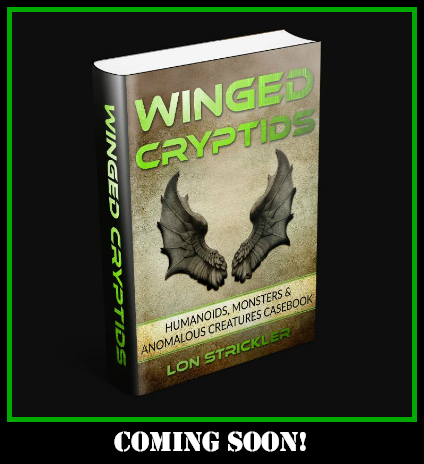 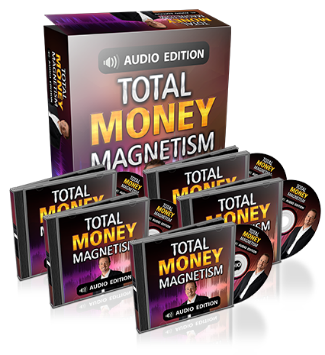 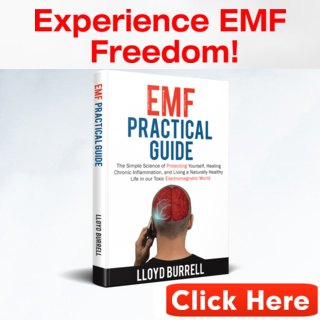 This newsletter is licensed under a Creative Commons Attribution-Noncommercial-No Derivative Works 3.0 United States License.Disclaimer:The publication of any and all content e.g., articles, reports, editorials, commentary, opinions, as well as graphics and or images on this web-site does not constitute sanction or acquiescence of said content unless specified; it is solely for informational purposes.Fair Use Notice:This site may contain copyrighted material the use of which may not be specifically authorized by the copyright owner. We are making such material available in our efforts to advance understanding of environmental, political, human rights, economic, democratic, scientific, social justice, and religious issues, etc. We believe this constitutes a ‘fair use’ of any such copyrighted material as provided for in section 107 of the US Copyright Law. In accordance with Title 17 U.S.C. Section 107, the material on this site is distributed without profit to those who have expressed a prior interest in receiving the included information for research and educational purposes.You understand that all Content posted on, transmitted through, or linked from the Phantoms and Monsters Site, are the sole responsibility of the person from whom such Content originated. You are responsible for all Content that you post, email or otherwise make available via the Phantoms and Monsters Site. Phantoms and Monsters does not control, and is not responsible for Content made available through the Phantoms and Monsters Site. By using the Phantoms and Monsters Site, you acknowledge that you may be exposed to Content from other users that is offensive, indecent, inaccurate, misleading, or otherwise objectionable.Please Note:On this day, November 27, 2014, in accord with 15 U.S. Code Chapter 107 – Protection of Intellectual Property Rights, I declare that my rights are attached to all personal data, voice recordings, photos, art, text, titles, etc. published or reproduced at any media source. For commercial and/or recreational use of the foregoing my written consent is required at all times. By this release, I tell all unauthorized person and/or parties that it is strictly forbidden to disclose, copy, distribute, broadcast, or to take any other action against me on the basis of its contents. The actions mentioned above apply equally to employees, students, agents and/or other staff under the direction of the offending parties. The contents of my profile include private information. The violation of my privacy is punished by the law (UCC 1 1-308 – 308 1 -103 and the Rome Statute) NOTE: Any use of witness information, which includes any attempt to contact a witness or persons involved in an event, is strictly prohibited without the written consent of Phantoms & Monsters.© 2005-2020 Phantoms & Monsters – All Rights Reserved

‘Were we chased by a Hellhound?’
admin Oct 17

‘Were we chased by a Hellhound?’

Stressed About Coronavirus? Here’s How Yoga Can Help.
admin Mar 30