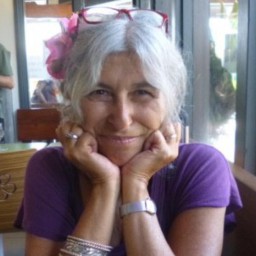 It should have been a wonderful journey, organized by three dear friends who run a yoga center in Costa Rica. I would be traveling with my husband, these friends, and thirteen other like-minded folk to the Sacred Valley of the Incas in the Andes highlands of southern Peru. We’d be staying at a lovely retreat center just outside Pisac, an ancient market town encircled by imposing mountains. And our itinerary would take us to some of the most important Inca sites, including the iconic, hauntingly beautiful and remote Machu Picchu.

We’d made the plans almost a year ago, and I’d been looking forward to the trip. But I fell sick several weeks beforehand and was hesitant to leave my Brooklyn home. Everyone assured me the journey would be magical, and so, feeling better but still uncharacteristically fearful, I reluctantly decided to go.

The Sacred Valley stretches some 62 miles west to east, along the Urubamba River, from Pisac to Machu Picchu. In the indigenous Quechua language—still spoken by most of the inhabitants—the Urubamba is known as  the “Willkamayu,” the “sacred river.” It’s easy to see why. A wide plain embraces the lively river. Some 9,000 feet above sea level, the valley is flanked by higher mountains from which tributaries tumble down. Cultivated as early as 800 B.C.E., the valley, aligned with the Milky Way, served the Incas based in nearby Cusco as a source for maize and a route for the importing of coca leaf and chile pepper. Today it remains a key area for the production of corn and potatoes, a fertile land now inundated by tourists.

This is a land where Pachamama, Mother Earth, is still openly venerated, where the principle of ayni, reciprocity, is regularly observed. The people we met, many of them indigenous Q’ero who maintain ancient farming, herding, and craft traditions, were gentle and kind, welcoming and warm. Our yoga practice each morning was nurturing and grounding. And our guide, an open-hearted young man who’d left his Westernized life in Lima to embrace his native heritage, was engaging, knowledgeable, and fun.

And yet, I couldn’t relax, couldn’t settle into the spirit of the trip. Suddenly skeptical, I found myself doubting the sincerity of the constant references to Pachamama. Seeking evidence, I questioned the authenticity of the Inca spirituality we were invited to embrace. Weren’t the Incas warriors, sun-worshippers not earth-lovers? Hadn’t they subjugated and most likely enslaved other groups before they were themselves conquered by the  Spaniards? Their graceful, monumental earthworks and temples were indeed remarkable, but was this really a culture—an empire—I wanted to emulate? I had my doubts.

During our first two days, while still adjusting to the altitude, we shuttled from site to site, pushing our way through hordes of other tourists as we explored the ancient structures. I was starting to get sick again, shivering at night and waking up each morning with a sore throat. At Sacsayhuaman, on the outskirts of Cusco, we had the rare privilege of entering the labyrinthine “Temple of the Moon” carved into the mountainside. On the third day, we took a train to Aguas Calientes and then a bus up to Machu Picchu. The heavy rain cleared just as we arrived and we were free to explore the usually overcrowded ruins in relative peace. Still, I was largely unmoved by what for many people is a “peak” experience. 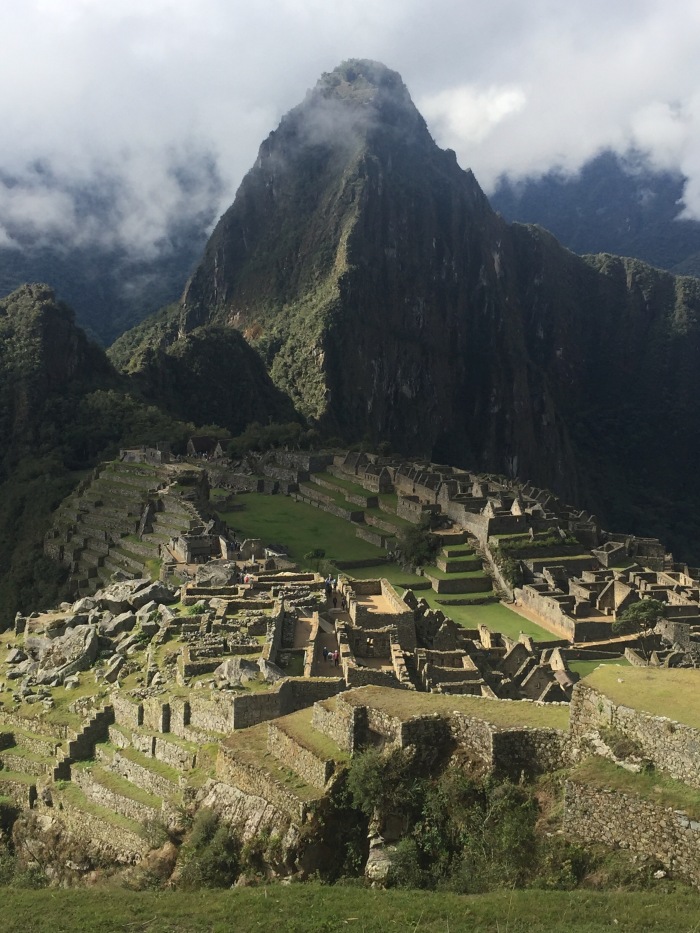 My first real moment of connection came early one morning back in Pisac, when a beautiful, elderly Shipibo woman named Elena slowly and quietly began to chant what she told me was a healing song—called an Icaro (follow this link to hear it)—as her index finger traced the meanderings of colored thread on an embroidered cloth I’d been drawn to.  “Esta Ayahuasca,” she explained, “para limpiar el corazon.” The design, she told me in Spanish, represented the Ayahuasca vine, used to cleanse the heart. Her embroidery was a kind of musical score, encoding the rhythm and melody of her song, the path of healing. As she sang, we looked deeply into each other’s eyes. Mesmerized, I sat on the earth in front of her, tears welling up. I would have gladly sat there for hours. But it was time to go, and so I hastily bought four of her stunningly patterned cloths. 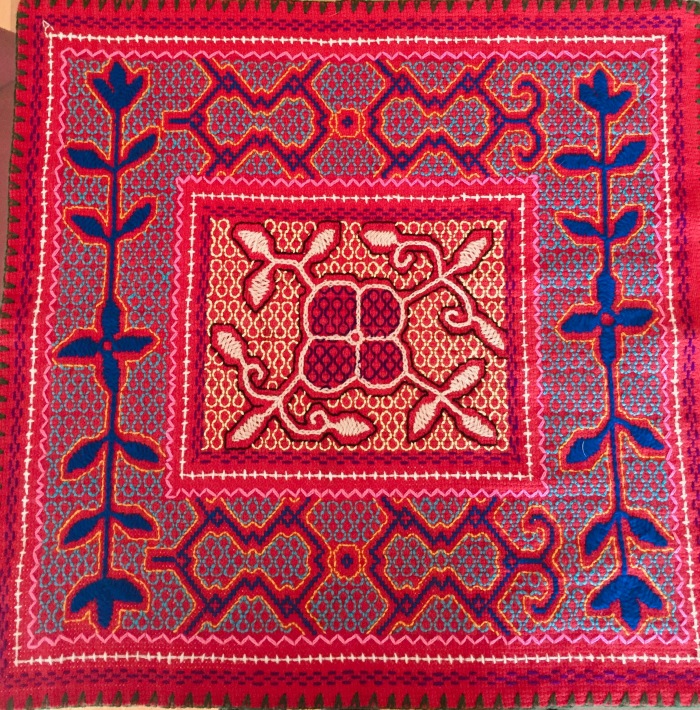 Two days later, on our last night in Pisac, after a despacho ceremony of gratitude led by Don Isidro, a Q’ero pampamisayuq—a spiritual leader and mentor of our guide—I woke up at midnight, panicked and unable to breathe. I feared that I was dying, that I would never return to my home in Brooklyn, that this trip had been the gravest mistake in my life. And then, as the tears flowed, I had, not exactly a vision, but a realization that these feelings were nothing new: they were a vestige of my first journey to the Andes, a journey I’d taken when I was eight years old, accompanying my mother and brother to visit a dying aunt in Bogota, Colombia.

Of course I’d been recalling that trip the whole time we were in Peru, as I encountered again the sights and sounds and smells of the Andes that had so impressed me as a child: the wild mountains, rushing rivers, ever-present scent of eucalyptus. But I’d managed, until just then, to keep at bay the sensations of that journey’s life-changing moment.

My cousins’ house was on the edge of the city; the mountains rose right behind it, just beyond a deep ravine crossed by a narrow mud bridge. One morning, several of us hiked up a lonely mountain path. And on that path, something happened that I cannot precisely remember. All I know is that at one point I wanted to scream, that something was covering my mouth and nose, that I couldn’t breathe. When I returned home, my dress was torn and dirty; I was reprimanded by my mother, and from that moment forward, I completely withdrew from my family. My stomach swelled, I wet my bed each night, and I was assailed by a mysterious ailment—white spots all over my body, chills and fever, a sore throat that compelled me to silence.

Had I been raped? Molested? Held down and touched in ways I did not want? I do not know the details, but I know enough. Whatever happened, it was a lesson in fear, an experience of helplessness and shame. And now, at the age of seventy, on a spiritual pilgrimage to Peru, I was feeling it all again.

I barely slept that night. In the morning, I began to sob once more, unable to look anyone in the eye. Our guide suggested I might want to spend some time alone in the “templo,” the circular building where we practiced yoga. But the templo was occupied, and so I found my way to the tepee just outside our room. There, sheltered in silence and solitude, I gave myself to the sweet-smelling earth: I lay face down, then on my back, then huddled in a fetal position. I cried and let the earth absorb my tears. Pachamama. Perhaps, after all, this was what they meant, this was why I’d come.

Joyce Zonana is the author of a memoir, Dream Homes: From Cairo to Katrina, an Exile’s Journey. She recently completed a translation from French of Tobie Nathan’s Ce pays qui te ressemble [My Sister, My Love], a novel celebrating Arab Jewish life in early twentieth-century Cairo, forthcoming from Seagull Books. She served for a time as co-Director of the Ariadne Institute for the Study of Myth and Ritual and has translated Henri Bosco’s Malicroix, forthcoming in February 2020 from New York Review Books.