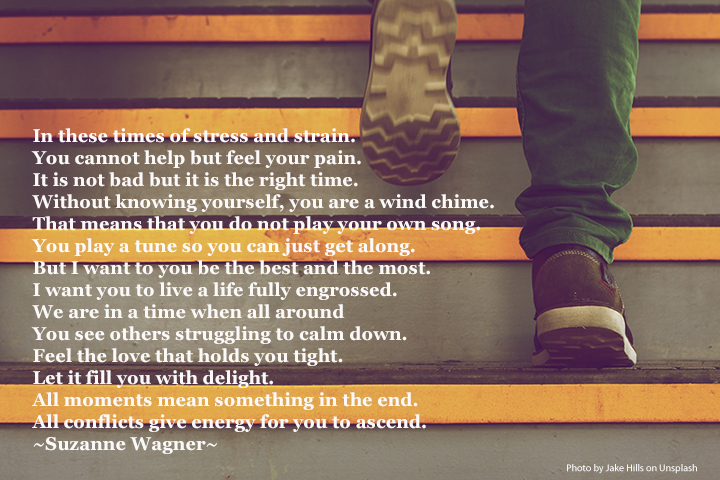 4/18/20 is the number 8. If you add the 4 + 1 + 8 + 2 + 0 + 2 + 0 = 17.  1 + 7= 8.
The number 8 is about finding that connection you have between heaven and earth. You are a bridge between that powerful Divine energy that inspires us to grow and change. And you are also of this earth. You are connected to this world through your body and the effort and actions you take in this world are often inspired by that Divine. Notice that you are that bridge. If you resist, that is when the sadness and depression of the number 8 can creep in. The universe tries to inspire you to act. Sometimes the actions that you are being prompted to do push up against your inner fears and beliefs. But that is the gift. They are there to show you that there is a doorway if you have the courage to take it.
~Suzanne Wagner~

The Moon is still in the intuitive and introspective sign of Pisces bringing understanding, caring and compassion into this day. This is a day when encouragement is worth more than you know.
Earlier in the day Mercury forms a sextile with Venus helping you be alert and to notice things that you really need to pay attention to. Expect your mind to be busy and you may notice that you are speaking quickly and with enthusiasm.  Let this moment activate your imagination and creative expression.
Mercury makes a quiet harmony to Mars, so this is great to get out to exercise.
The Moon sextile Uranus. You have determination and persuasion to motive yourself and others today. You have some creative ideas that bring in new methods and ways to help you through this time.
Notice where you are inhibited and you have problems that you are co-contributing to. It is time for you to shift and change the energy within first then watch the outer also change.
~Suzanne Wagner~

In these times of stress and strain.
You cannot help but feel your pain.
It is not bad but it is the right time.
Without knowing yourself, you are a wind chime.
That means that you do not play your own song.
You play a tune so you can just get along.
But I want to you be the best and the most.
I want you to live a life fully engrossed.
We are in a time when all around
You see others struggling to calm down.
Feel the love that holds you tight.
Let it fill you with delight.
All moments mean something in the end.
All conflicts give energy for you to ascend.
~Suzanne Wagner~

Once when we were in the Urubamba Valley, we stayed at this adorable hotel that seemed brand new and it was so colorful and bright.
I had a group of 33 women and there were about 11 men that decided to do a side excursion into the jungle area of Peru. So the group split and I had the 33 women and the men were deep in the jungles of the Amazon rainforest.
I was rooming with one of the women whose husband was on the jungle trip. As we settled into the hotel there was something that was spooky and odd about this hotel. I kept seeing things out of the corner of my eyes and while Peru is filled to the brim with spiritual energy and ghosts, this seemed more than normal.
Things always get more interesting in the evening as darkness comes in and this evening was one to remember. I was literally laying in my bed as spirits of all kinds were flying over my head. I did not want to freak out the woman in the room with me and so I went and grabbed some of my sacred river rocks and a meteorite that I had and laid back down holding one rock in each hand trying to ground. This was beyond anything that I could explain. There were jaguars, condors, plants from the jungles, and dead people all over the place. I could keep my center with the help of the sacred stones but it was challenging. I have seen dead things before but nothing like this. Then she woke up, ran to the bathroom, and started throwing up. And she could not stop. I knew it was because of what was happening in the room but your brain in such moments tries to figure out a reason. My mental reason is that in Peru it was common for people to get stomach stuff and get sick from the food and water. But in my right brain I knew that was not really what was going on.
Finally her vomiting calmed down and I could see that there was some connection happening between what her husband was going through in the jungle and what was going on here. Because so many of the animals were jungle animals and we were in the mountains. I had her hold onto my rocks and that did seem to help and after trying to help her all night (and not telling her that dead people were flying around) I felt that I needed some help and went to the shaman’s room in the hotel and knocked on the door. He was awake and opened the door saying simply, “I know!”
I said, “Know what?”
He said I know that she has been sick all night and I have been trying to help her also. She has a very dysfunctional co-dependent connection with her husband and he is confronting big issues inside himself and the shaman in the jungle is trying to break him out of his addictiveness. And I know that you know this place is haunted. It was built on a graveyard that was washed away in a huge flood years ago and then they built this hotel back up on that land. A terrible idea.”
I stood there in amazement. Because it explained a lot of things that were going on. I was never so happy to leave a hotel in my life.
Later on, the men returned and sure enough, that woman’s husband was a wreck. The shaman had called him out on being a big recreational drug addict (which he evidently was) and the confrontation had triggered him in a big way.
They spent the rest of the trip, dealing with big issue that were happening in their relationship. So perhaps it was a good thing overall. But it was still an experience I will never forget.
~Suzanne Wagner~