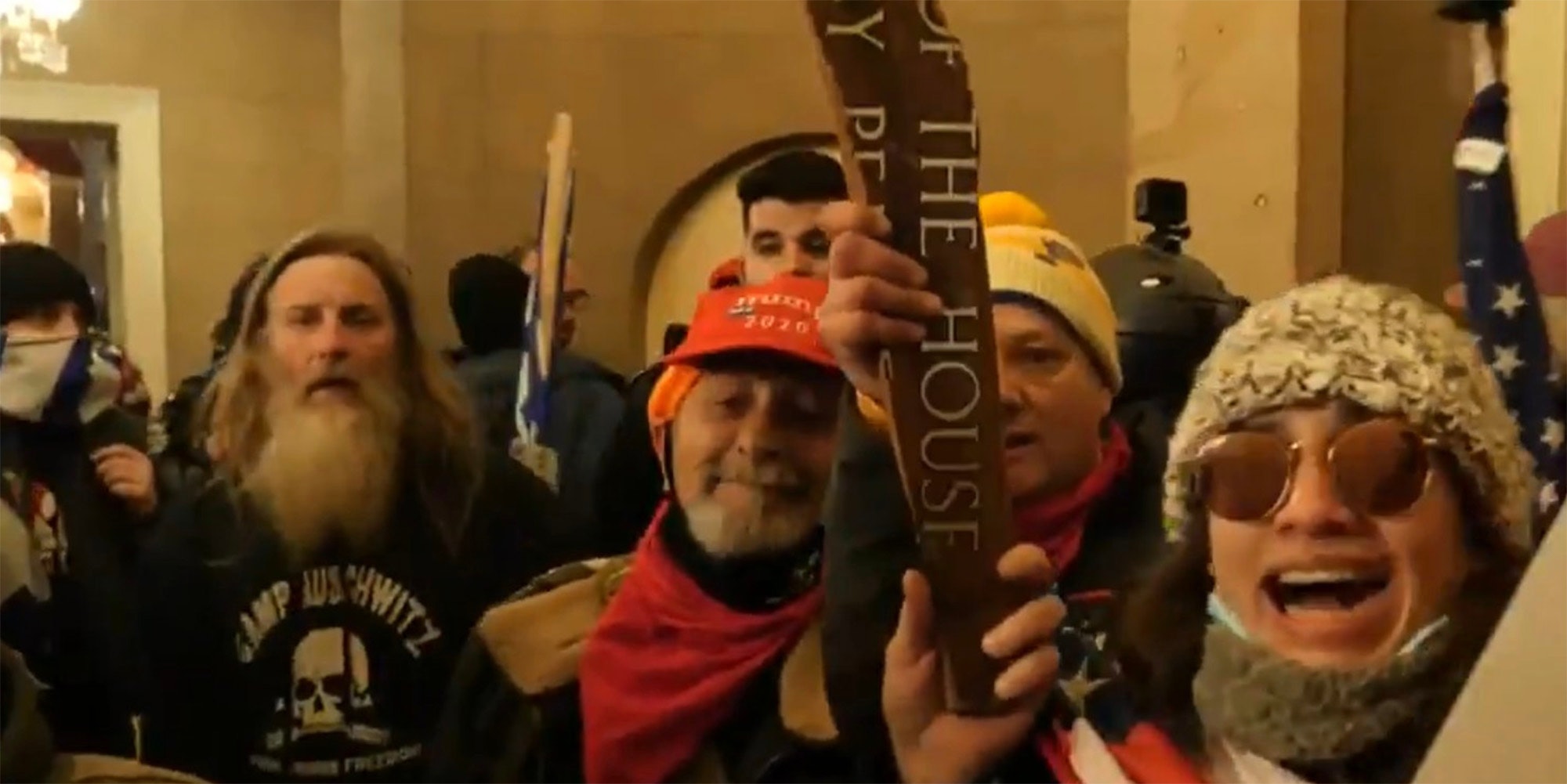 As photos from Wednesday’s riot at the U.S. Capitol circulated in the news and on social media, a number of people jumped on Twitter seeking to identify rioters with neo-Nazi ties—while a number were aghast at photos of a man with what appeared to be a pro-Holocaust sweatshirt celebrating “Camp Auschwitz.”

The man in the “Camp Auschwitz” sweatshirt, which appeared to be initially taken from ITV News, alarmed enough people for the allusion to the notorious Nazi concentration camp to trend on Wednesday night.

The New Republic’s Matt Ford shared a Mike Debonis tweet stating, “This was the Founders’ nightmare” by commenting directly on the shirt.

Today President Donald Trump allowed the U.S. Capitol to be overrun by Confederates, Nazis, and Klansmen.

He didn't object because that's his base. pic.twitter.com/5VFSFnDaaJ

Another observer, who caught a photo of the man outside the capital, revealed the “Work Brings Freedom” slogan (a translation of the “Arbeit Macht Frei” sign that infamously marked the concentration camp’s entrance), with a single, pointed word on the back: “Staff.”

And author Jeff Sharlet had some other troubling details about the mob tied to this photo, including the assertion that “Fox News broadcast without comment video of a man carrying a sign saying ‘No foreskin, no peace.'”

"Camp Auschwitz," says the hoodie of this "patriot," part of the crowd that invaded Pelosi's office. Fox News broadcast without comment video of a man carrying a sign saying "No foreskin, no peace." Fucking Nazis. pic.twitter.com/9WeBIzVtXh

It appeared that, amid the rioters, he wasn’t quite alone.

That allegation was immediately rebuffed by Joan Donovan and others, who identified the two in the photo on the right as alleged neo-Nazis Jason Tankersley and Matthew Heimbach. One respondent noted, “They literally took [that] picture from Antifa’s site saying ‘these are known Nazis.’ I guess you don’t need reading comprehension to become an attorney anymore.”

This are two of the most recognizable men from the far right.

Wood is a menace. https://t.co/kNaGNmaLHq

They literally took took picture from Antifa'a site saying "these are known Nazis." I guess you don't need reading comprehension to become an attorney anymore.

That's Jason Tankersley and Matthew Heimbach. They are neo-Nazis.

Definitely not the same dude so… yeah. pic.twitter.com/v0ZPKu5Oil

Holocaust denier Nick Fuentes and neo-nazi loser Baked Alaska both live-streamed from Pelosi's office after storming the capitol. Neither have been arrested. pic.twitter.com/HEAQQKQgp0

Donovan’s tweet also got an intriguing response from Paige Sandhu, who noted, “They’re also screenshooting the image preview of this idiot and saying he’s antifa. Little do they know that if they expand the image… he’s a Q shaman. Not antifa.”

They’re also screenshooting the image preview of this idiot and saying he’s antifa. Little do they know that if they expand the image… he’s a Q shaman. Not antifa. pic.twitter.com/tP9NRVOqO9

As the Daily Dot reported Wednesday, the person photographed is actually Jake Angeli, known in QAnon circles as the Shaman for his face paint and furs, captured in this tweeted photo inside Senate chambers.

People making allegations on Twitter about peoples’ identities and their activities aren’t necessarily conclusive. But the energy around determining who was part of the rioting (especially if they had neo-Nazi ties) reflects a greater desire to get answers—and, for many trying to uncover who was responsible—justice.