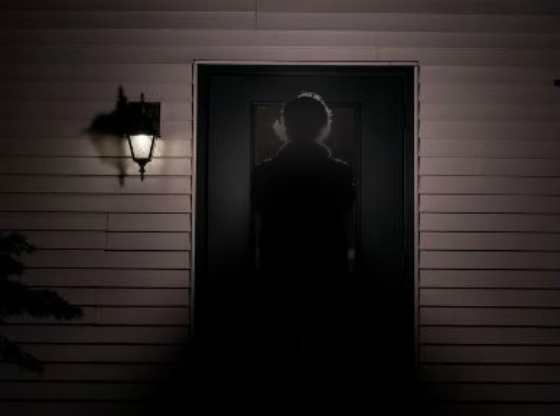 Alan in California called in to tell of a weird experience he had:“I want to share a paranormal experience I had about 9 years ago. I’ve had paranormal experiences all my life but this one in particular creeped me out. I was living with my parents at the time. I was about 16 or 17, somewhere around there. We were living in a duplex house.One night my parents decided to go for a drive and it was just me, my sister, her then boyfriend and my nephew, Eric. He was really older. He was older than me. Don’t ask. My parents were weird. Anyway, see, the thing about my nephew Eric was that he was always kind of a little odd, a little strange and somewhat of a klepto but I couldn’t prove that. So, anyway, one night I was in my room actually trying to go to sleep. I started dozing off and I heard a knock at my door. My room had two doors, one that leads into the house and one that leads into the backyard which is really cool when I used to sneak out. Anyway, so I heard a knock at the backdoor and I was like, that’s odd, that never happens. And I said, ‘Who is it?’ And it was my nephew, Eric. He said in a hurried voice, ‘Hey, Alan, it’s me. Let me in.’ I said, ‘No, Eric, you know you’re not supposed to be coming into my room. Go away!’ And he said, like, ‘No, man, let me in! Let me in! They’re going to get me. Let me in! You have to let me in!’ And I said, ‘Dude, just go to the front door. I’ll unlock it. Come in.’ So I wake up, kinda pissed because I was trying to sleep, and I go out to the front and I see my parents driving up. And I said, ‘Hey, guys, mom, dad, did you guys see Eric? He was out here trying to bug me in my room after I said specifically, I don’t want him in my room. You guys need to talk to him.’ And my dad said, ‘Alan, you’re still asleep. Go back to sleep.’ And said, ‘Nah, I’m wide awake now because Eric woke me up.’ He said, ‘Alan, Eric is… He’s asleep in the living-room. That’s where he was when we left.’ I ran inside really quick, went to the living-room and I found him asleep on the couch. And I said, ‘Eric, were you just knocking on my backdoor?’ and he said, ‘No, man, I’m asleep.’ That tripped me out.If that wasn’t enough to creep me out, a week later, my mom and I are out front. She’s watering her plants. I’m just kinda hanging with her and we see a lady with, like, flowers and candles and stuff by the corner of our house near the street and we see her laying stuff there. Now my mom’s like, ‘Let’s see what she’s doing.’ So my mom asks the girl in Spanish, like, ‘Hey, what’s up? Can I help you?’ And the lady said in English, ‘Oh, hi, I’m sorry. I didn’t mean to disturb you guys, I’m just putting something here for my boyfriend. He was a… He was a, you know, I lost him here ten years ago and I’m just paying respect.’ And my mom’s like, ‘If you don’t mind me asking, what happened?’ Apparently they used to live in that same duplex at that time. They got into a nasty fight. Her and her boyfriend and she kicked him out of the house. And when she was trying to take a shower, he came knocking at that backdoor saying, ‘Let me in! They’re going to get me, let me in!’ And she told him, ‘No, no, get out of here! Get out of here,’ you know, ‘You’re not allowed in this house anymore!’ he said, ‘Let me in!’ She said, ‘No, go away!’ So apparently he left the backyard only to get shot and killed in the front yard at that very corner. So when I heard her tell that story, I pretty much, I got weak in the knees because I was like, I heard that exact same thing last week. Somebody was telling me to: Let me in! Let me in, they’re going to get me!’ The same thing I had heard is what she told me.”Source: Darkness Radio – July 13, 2016Beyond Creepy********** 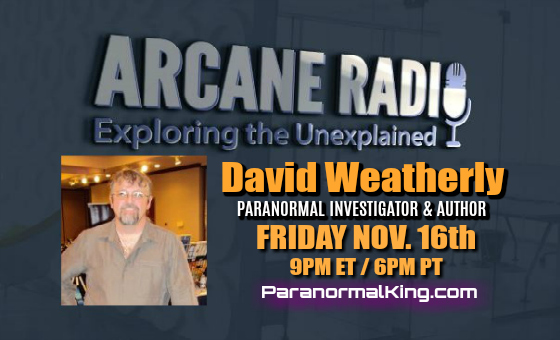 Arcane Radio is LIVE on the Paranormal King Radio NetworkFacebook event announcement: David Weatherly – Paranormal Investigator, Author and Explorer – Arcane RadioJoin me as I welcome paranormal researcher, cryptozoologist, author and world explorer David Weatherly to Arcane Radio. David is a renaissance man of the strange and supernatural. He has traveled the world in pursuit of ghosts, cryptids, UFOs, magic and more. From the specters of dusty castles, to remote, haunted islands, from ancient sites, to modern mysteries, he has journeyed to the most unusual places on the globe seeking the unknown. David’s shamanic and magical background has given him a unique perspective in his explorations into the unknown, and he continues to write, travel and explore, leaving no stone unturned in his quest for the strange and unusual. In 2012, David founded the independent media and publishing company, Leprechaun Productions. He is a frequent guest on Coast to Coast AM, Darkness Radio and other radio programs. David has also appeared on numerous television shows including Ancient Aliens, Mysteries at the National Parks and Beyond Belief. This should be a very informative and entertaining show! Join us this Friday, November 16th at 9PM ET / 6PM PT on ParanormalKing.com – Meet us in the chat room…just click the banner or go to www.paranormal.olicentral.comListen to our podcast at Arcane Radio on Podbean. You can also listen to the podcast at Arcane Radio on Stitcher – iOS, Android and the Webplayer. Please consider becoming an Arcane Radio patron. Thanks…Lon**********DO YOU ENJOY ‘PHANTOMS & MONSTERS?”Phantoms & Monsters’ has always been a free access blog and newsletter. It is one of the very few paranormal / cryptozoology sites that offers first-hand information on breaking incidents and investigations. The site survives solely on donations.If you would like to support the newsletter, blog and my work, you can use one of the donation buttons on the blog or newsletter, or go to Paypal.com and use my email lonstrickler@phantomsandmonsters.com as the payee. Thanks again. Lon

**********TODAY’S TOP LINKSLake Michigan Mothman (Para-con in the Northwoods 2018)Strange Accounts of Fishermen and the ParanormalLily Dale: Where the Living and Dead ReconnectMultiple Reports and Air Traffic Recordings of UFOs Over IrelandNot Quite A “U.K. Roswell” But Still Intriguing**********The Gods Never Left Us

Nightmare in the Woods: One Family’s True, Strange and Terrifying Encounter with Bigfoot in the Northeastern United States

The Sociopath Next Door

This newsletter is licensed under a Creative Commons Attribution-Noncommercial-No Derivative Works 3.0 United States License.Disclaimer:The publication of any and all content e.g., articles, reports, editorials, commentary, opinions, as well as graphics and or images on this web-site does not constitute sanction or acquiescence of said content unless specified; it is solely for informational purposes.Fair Use Notice:This site may contain copyrighted material the use of which may not be specifically authorized by the copyright owner. We are making such material available in our efforts to advance understanding of environmental, political, human rights, economic, democratic, scientific, social justice, and religious issues, etc. We believe this constitutes a ‘fair use’ of any such copyrighted material as provided for in section 107 of the US Copyright Law. In accordance with Title 17 U.S.C. Section 107, the material on this site is distributed without profit to those who have expressed a prior interest in receiving the included information for research and educational purposes.You understand that all Content posted on, transmitted through, or linked from the Phantoms and Monsters Site, are the sole responsibility of the person from whom such Content originated. You are responsible for all Content that you post, email or otherwise make available via the Phantoms and Monsters Site. Phantoms and Monsters does not control, and is not responsible for Content made available through the Phantoms and Monsters Site. By using the Phantoms and Monsters Site, you acknowledge that you may be exposed to Content from other users that is offensive, indecent, inaccurate, misleading, or otherwise objectionable.Please Note:On this day, November 27, 2014, in accord with 15 U.S. Code Chapter 107 – Protection of Intellectual Property Rights, I declare that my rights are attached to all personal data, voice recordings, photos, art, text, titles, etc. published or reproduced at any media source. For commercial and/or recreational use of the foregoing my written consent is required at all times. By this release, I tell all unauthorized person and/or parties that it is strictly forbidden to disclose, copy, distribute, broadcast, or to take any other action against me on the basis of its contents. The actions mentioned above apply equally to employees, students, agents and/or other staff under the direction of the offending parties. The contents of my profile include private information. The violation of my privacy is punished by the law (UCC 1 1-308 – 308 1 -103 and the Rome Statute) NOTE: Any use of witness information, which includes any attempt to contact a witness or persons involved in an event, is strictly prohibited without the written consent of Phantoms & Monsters.© 2005-2018 Phantoms & Monsters – All Rights Reserved

Creepy Clown In My Bedroom