Inside the glamorous world of ‘Bling Empire’ star Jaime Xie, the tech heiress looking to forge her own path as a fashion influencer 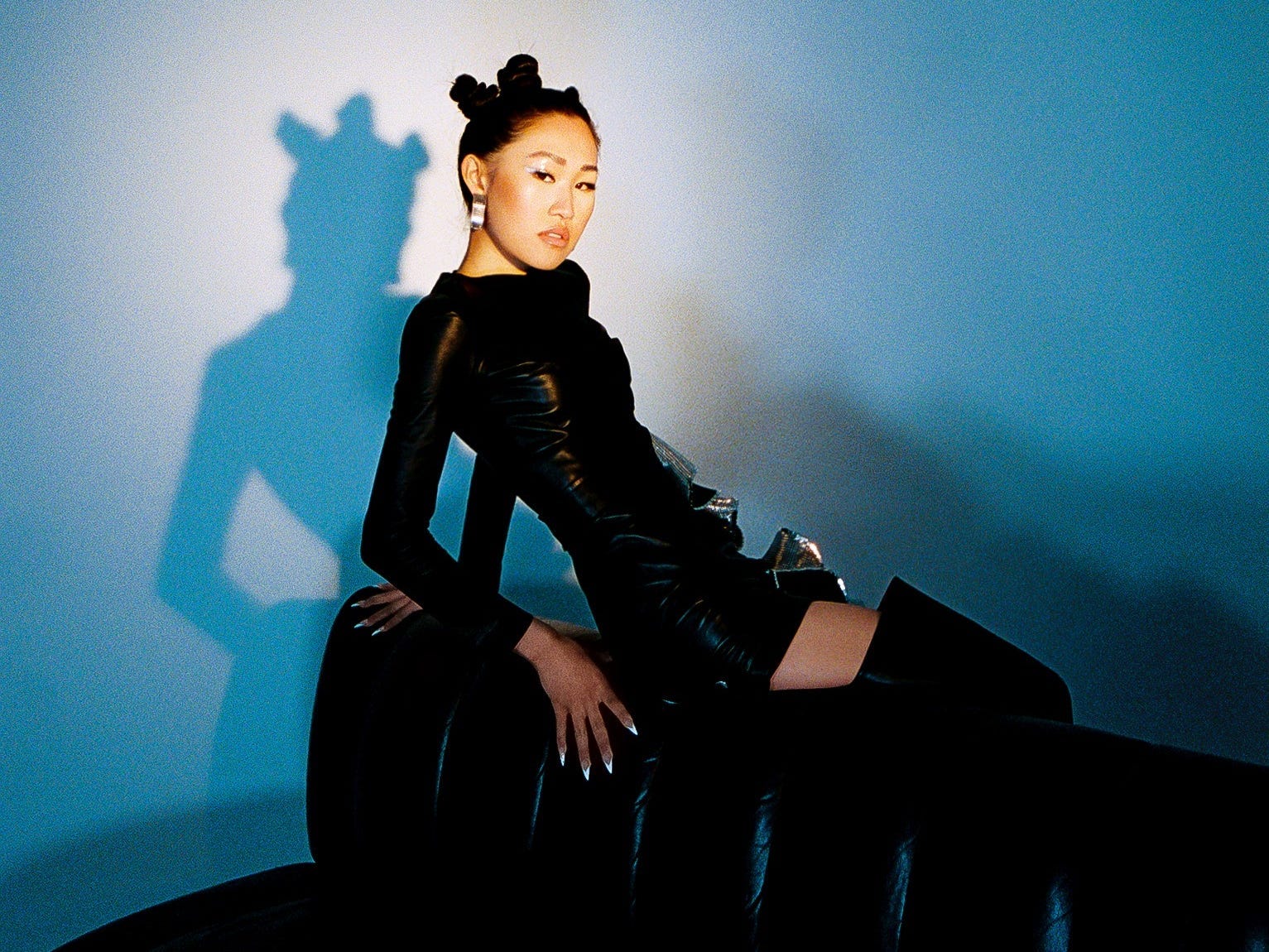 Jaime Xie, daughter of a tech billionaire, is known for being a fashion influencer and for appearing on the hit Netflix show “Bling Empire.”
She says she makes nearly $100,000 as an influencer, and is frequently seen in New York, London, Milan, and Paris for fashion weeks.
In an interview with Insider, she talks about her love for fashion, what it was like being on “Bling Empire,” and her next career plans.
Visit Business Insider’s homepage for more stories.

A few years ago, Jaime Xie’s mother made her a bet. “My mom was like, Jaime, if you get into Parsons, I will get you a Birkin,” Xie told Insider, referring to the exclusive Hermès handbag.

Xie is the 22-year-old daughter of billionaire Ken Xie, the Asian American billionaire who built the first firewall and VPN. Currently the founder and CEO of cybersecurity company Fortinet, he previously founded Systems Integration Solutions and NetScreen, the latter of which he sold for $4 billion to Juniper Networks in 2004.

Jaime told Insider that although she was born and raised in Silicon Valley, “surrounded by tech and Teslas,” tech wasn’t really her thing. She said she’s been in love with fashion since middle school, when she realized Chanel and Louis Vuitton were much cooler than the Hollister and Abercrombie she had hanging in her closet.

So naturally, Xie wanted to study fashion business at Parsons, one of the top fashion schools in the US – she also really wanted that Birkin her mother was offering –it would be her first, after all.

She got into Parsons (and got the Birkin), but she opted against attending, enrolling instead in the close-to-home Fashion Institute of Design and Merchandising in Los Angeles. About a year later, she dropped out to focus on influencing full-time. Now she has just over 300,000 Instagram followers.

Now, Xie told Insider, she’s making almost $100,000 a year from brand collaborations and partnerships. She buys her own clothes with her own money and she was regularly attending couture weeks in Paris and fashion shows in Milan before the pandemic. Snapshots of her life can be seen on the new hit Netflix series “Bling Empire,” which chronicles the lives of wealthy Asians and Asian Americans living in Los Angeles.

Xie remembers the months before the pandemic hit very clearly. She had attended couture week in Paris, then went to Davos to see her father speak at the World Economic Forum. They went skiing in Saint Moritz in Switzerland, then Xie attended more fashion weeks and came back to California in March, exhausted.

“I was going home to chill, but I had no idea the chilling time was going to be this long,” she said. Jobs froze for a moment during the early part of last year but began to pick back up in the summertime, and she was able to attend a charity gala with Luisaviaroma and UNICEF on the Amalfi Coast in August.

Her career as an influencer has only been slightly affected by the pandemic, she said, and she has been splitting her time between the Bay Area and LA, where she has most of her photoshoots. 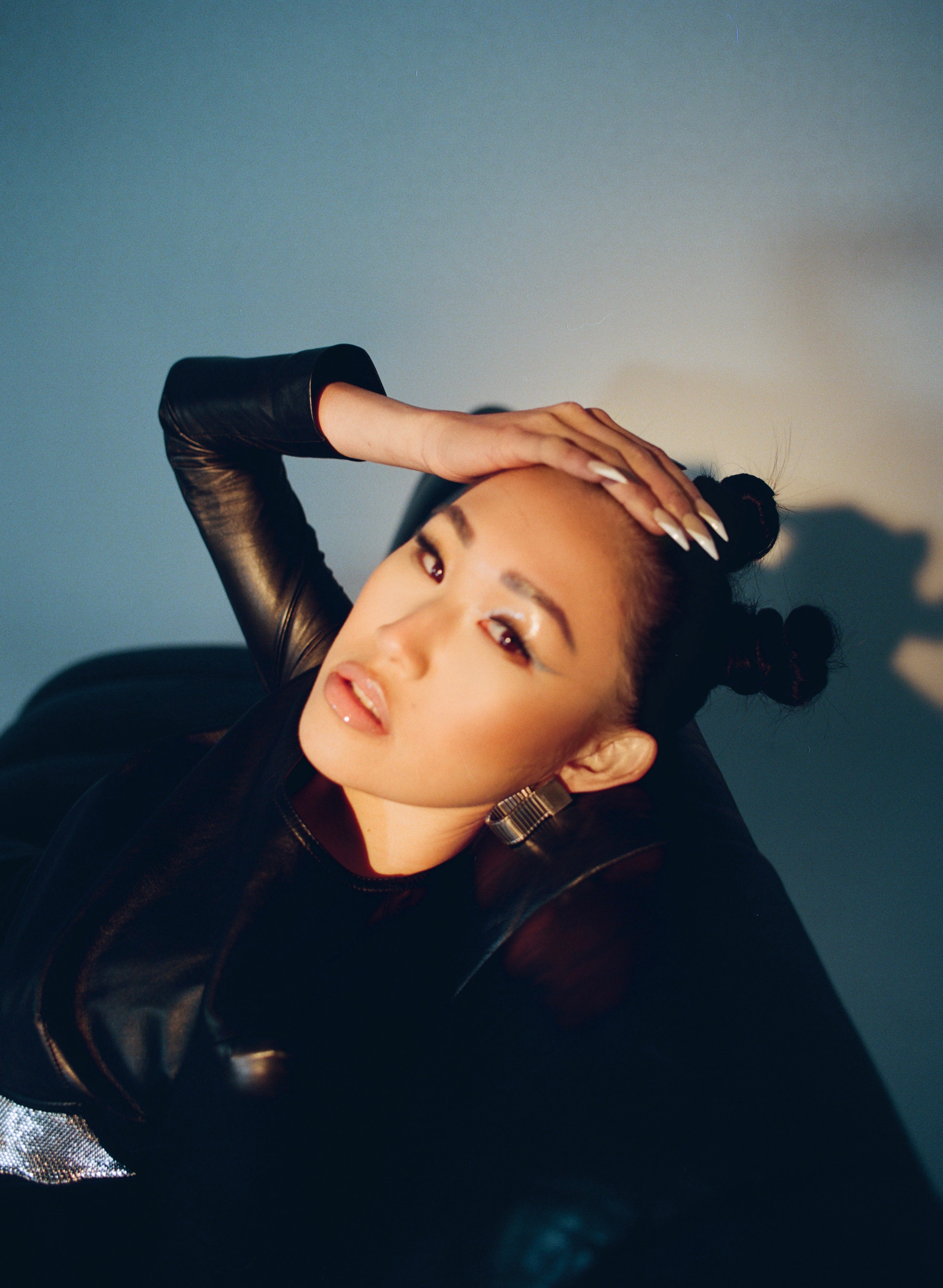 Xie attended her first fashion week around the age of 17

A competitive equestrian, Xie spent her high school years entirely online as she traveled the country riding horses. Even then, she said, she couldn’t go a day without thinking about fashion.

Much of her fashion knowledge is self-taught, from reading magazines and stalking out fashion websites. Her first designer buy was around seventh grade – a Louis Vuitton Neverfull Tote and an Hermès belt – the one with the big H on it. By 17, she had attended her first fashion show. It was Dior.

At the time, they were staying at the Hôtel Plaza Athénée on the Champs-Elysées. One day, they ran into Christine Chiu, future “Bling Empire” castmate, who broke the news to her. “When I bumped into her, she’s like, ‘Oh yeah, I’m here to attend a bunch of shows,'” Xie recalled. “I was like, okay, then in September I want to go to all the ready-to-wear shows, starting in New York.”

Back in California, Xie was also becoming known in her friends’ circle as someone with taste. 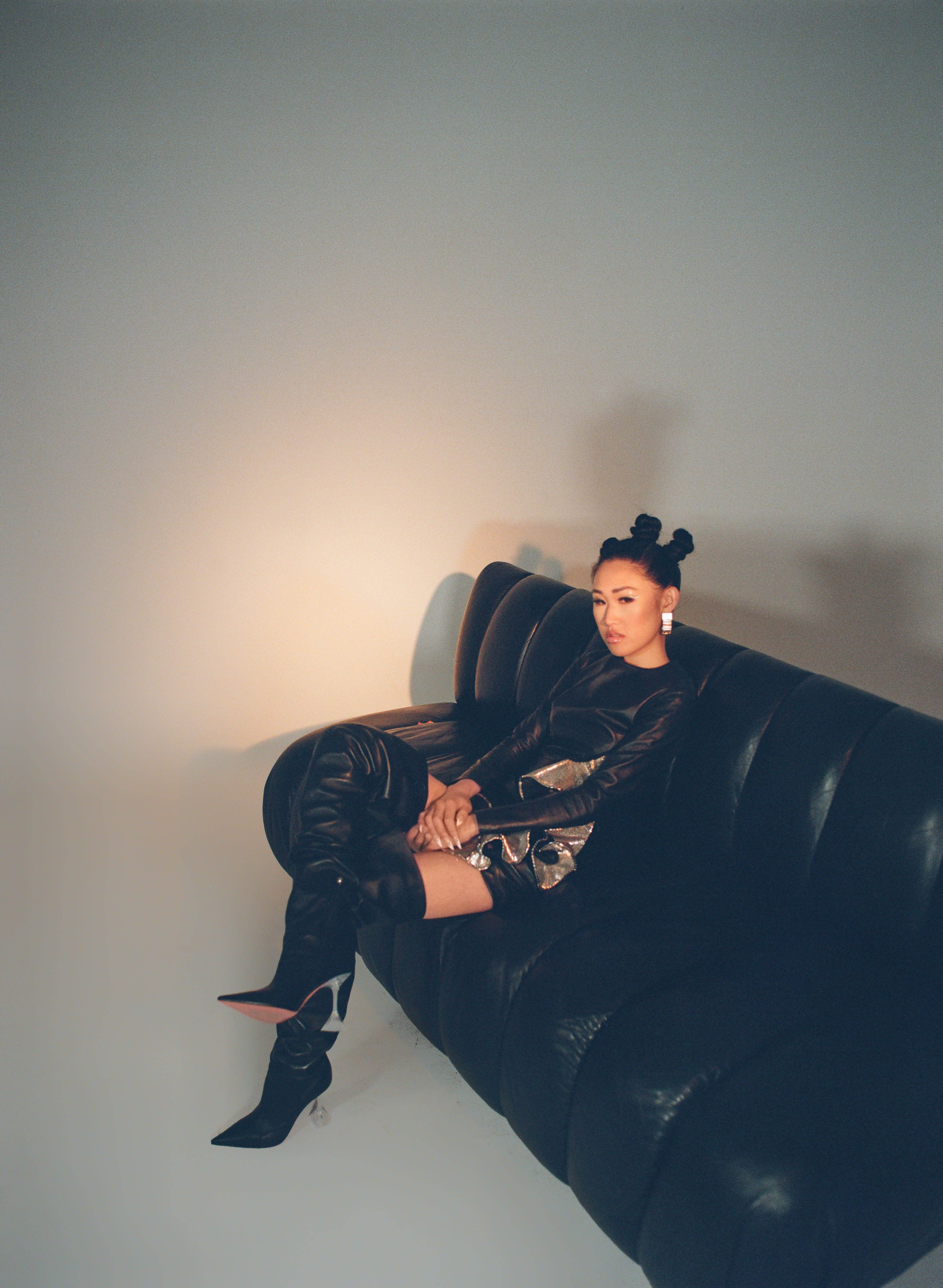 “Jaime’s sense of style is multifaceted,” her close friend Mathew Sakhai, 22, told Insider. “She can go from girly and sweet to edgy and dark without making you think she has no fashion identity because you can see her mark in every look she chooses.”  Xie loved – and still loves – wearing emerging and new brands, mixing them with heritage houses like Prada and Mulguer. She loves vintage, especially from Gucci, Chanel, and Dior. “When I have free time, I’ll just be browsing on Vestiaire Collective, eBay, to find some cool vintage,” she said. “The thing I love about vintage is that it’s something not everyone will have.”

She also has some more affordable brands in her closet. Her mentality is that she’ll buy anything and everything that looks good, “regardless of whether it’s Zara of Chanel.” In fact, Xie said she was shopping so much during her adolescence and spending so much of her parents’ money that they made her get a summer job working at Nordstrom’s when she was 18 to “appreciate the value of money.”

During this time, Xie was posting photos of her outfits on Facebook. She branched out to Instagram and YouTube at the recommendation of her equestrian friends, who felt she had a good sense of style.

On YouTube, Xie began doing unboxing videos – meaning she would unwrap her designer purchases in real time and show them off to the audience. She stopped doing them despite receiving positive feedback, she said, because she didn’t like showcasing her wealth in such an extreme way.

So, she pivoted to focusing more on Instagram, where, she said, she likes to “keep it real.” Her page is a mixture of selfies, magazine photoshoots, and designer street style. “Very casual,” she explained. “Somewhat relatable.”

Around the age of 19, she decided to pursue digital content creation full-time, and now gets invited to fashion shows around the world as an influencer. She travels frequently between New York, London, Milan, and Paris. Before the pandemic, there was couture week twice a year, in January and in July. Then there was ready-to-wear in February and September, then other shows in between, like bridal weeks and menswear.

Xie said she used to switch outfits about five to six times a day “because you wear a different look to each show,” she said. “It’s a sign of respect to the designer.” 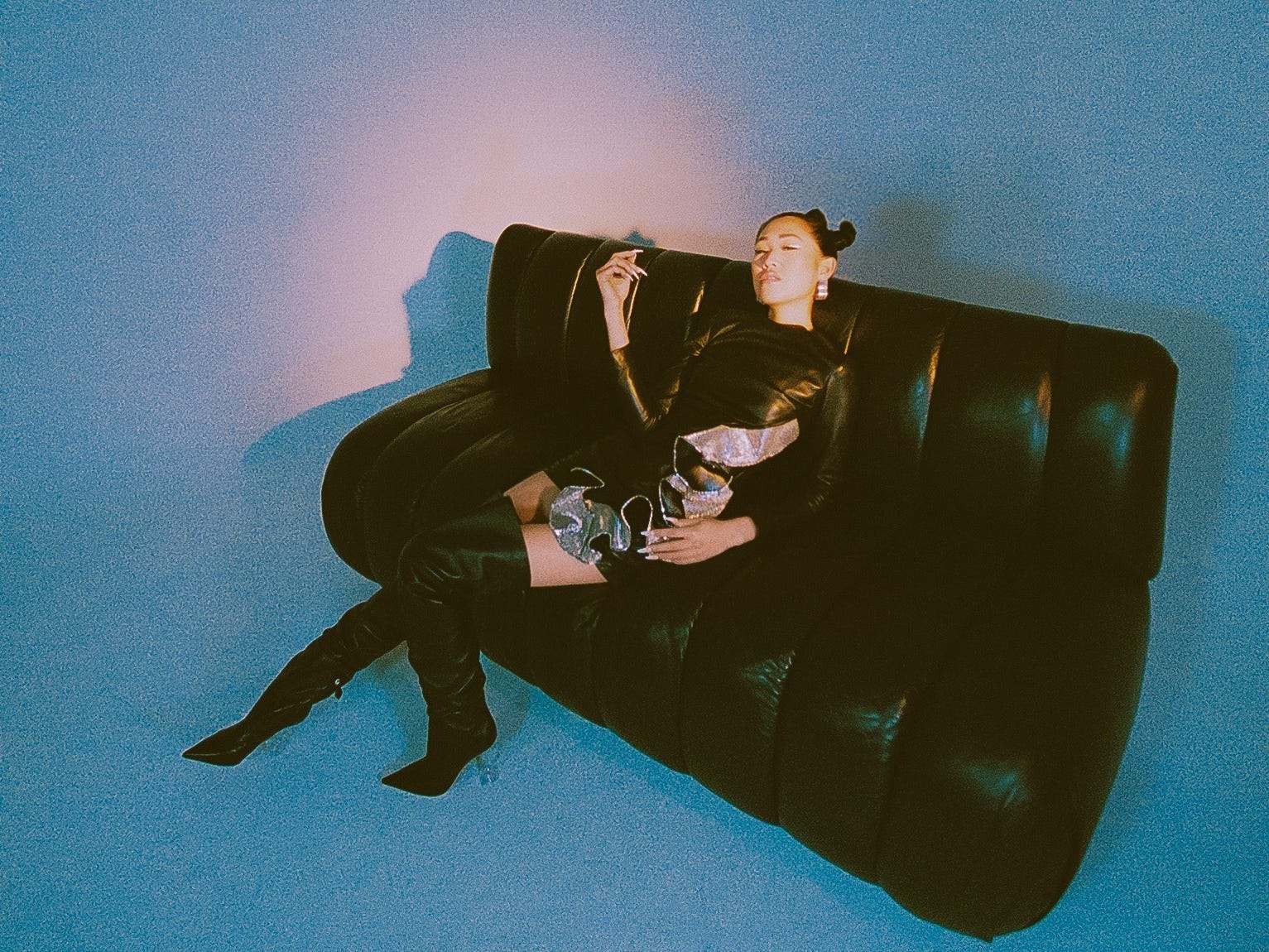 Lately, Xie has been thinking of where to take her career next. She wants to start a sunglasses line, and a shoe line is not out of the question. As a vegan, she said she’s also willing to explore opening something concerning healthy living and wants to get into philanthropy, working more with her family’s foundation.

She never thought she would end up on reality television, though. Growing up, she never watched any reality TV, and she was the last person to join the “Bling Empire” cast when it went into development in 2018. When asked for advice on how to act on the show, she said the producers told her to just be herself and “have fun.”

That’s best summed up, perhaps, in the scene where the “Bling Empire” cast is on the beach talking to a shaman. Xie posed a question to the healer: what color Bottega Veneta bag should she get? It was, of course, for fashion week, and there are endless color options to choose from. Sadly, the scene cut before the shaman could give her an answer.