Aloy is no stranger to frigid hunting grounds and terrifying canine creatures, so when the opportunity came about to expand upon the Monster Hunter x Horizon Zero Dawn collaboration, everything started falling into place pretty seamlessly. Today, the first quest in this multi-part crossover is available for Iceborne hunters on PS4, giving players a chance to craft a special event Light Bowgun: the Stormslinger Prototype. 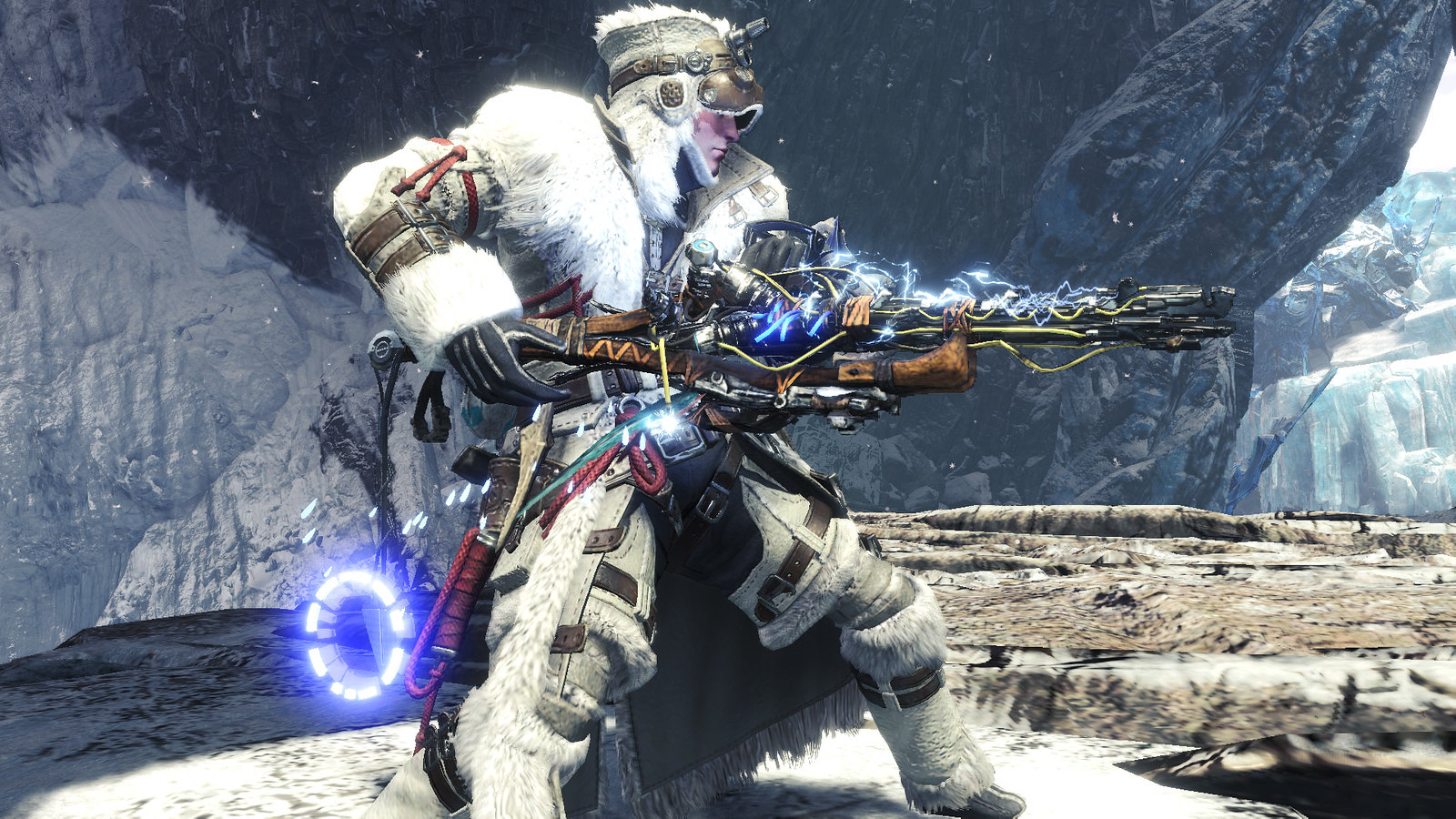 This ranged weapon is designed after the Improved Stormslinger in Horizon Zero Dawn: The Frozen Wilds, and it translated quite well to the Monster Hunter series. All the iconic design aesthetics of the Banuk tribe are there: wooden base frame, light blue tones, feathers and a certain improvised/makeshift appeal.

To give us all additional insight on the Stormslinger, here’s Roy Postma, Art Director on Horizon Zero Dawn, with a quick look behind the curtain on the process of creating this weapon within the context of Horizon Zero Dawn: The Frozen Wilds:

“The Improved Stormslinger started out as an upgrade to the spear that the Banuk shaman Ourea wields in the Horizon Zero Dawn DLC expansion, The Frozen Wilds. For the design, we took the technical parts from that spear and arranged them on a ropecaster framework, which allowed us to plausibly extend its power capacity. Using the concept of “the more power the better” as a guiding principle, we then strapped together additional capacitators and wired all the technological parts together.

“Another important concept we wished to convey was the humans’ limited understanding of technology; the weapon had to reflect this in look as well as in feel. For the look, we created a very chaotic layout by arranging the capacitators at different angles and snaking the wires all around and through the weapon. For the feel, we wanted the Improved Stormslinger to behave temperamentally when using its charge-up mechanic. The ability to overcharge the weapon causes the capacitators to glow and spark, eventually resulting in blowback that can cause massive damage to its wielder.” 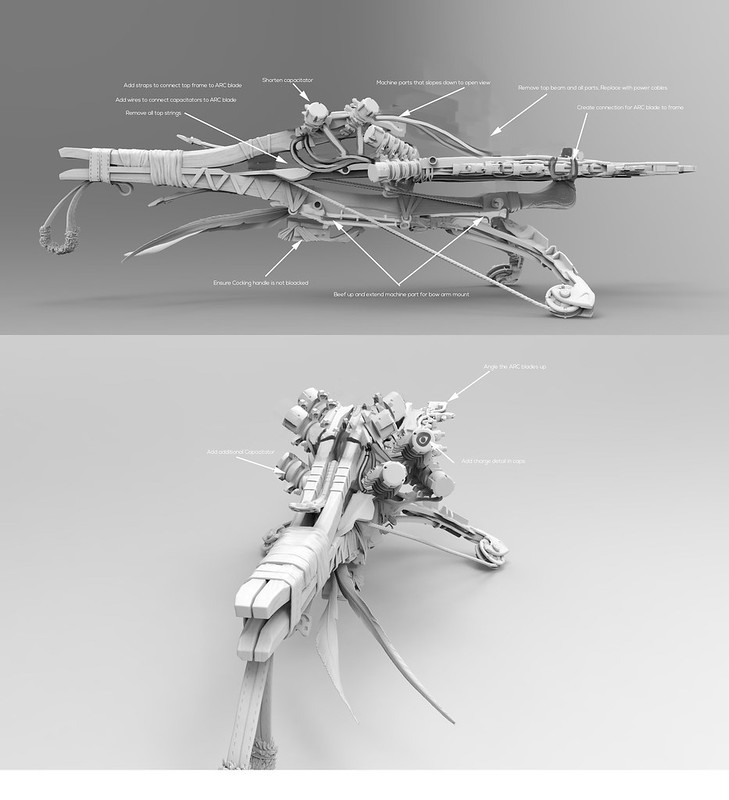 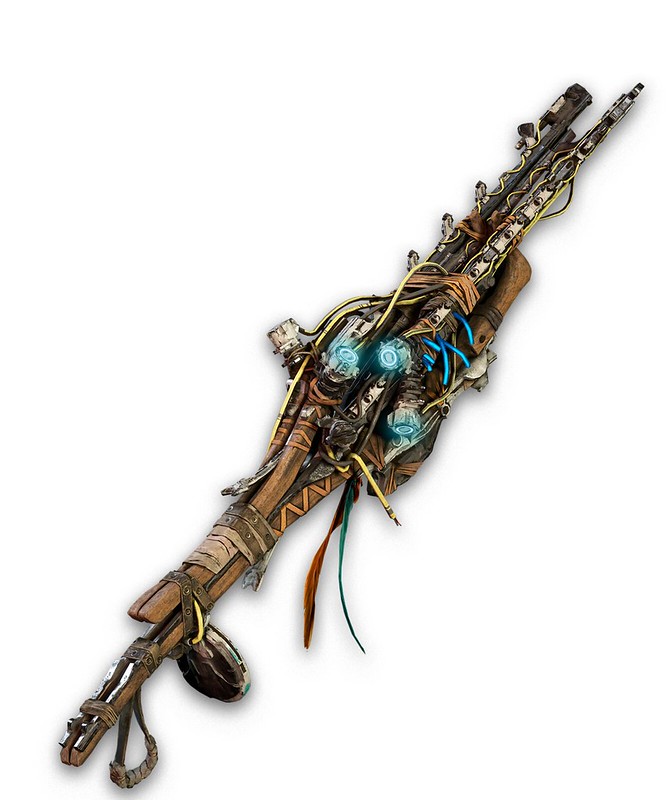 The way you’ll get your hands on one of these is also a nod to the source material. In Horizon Zero Dawn: The Frozen Wilds you get to fight a ferocious canine beast — known as Scorcher — that charges up its moves for powerful attacks. Sound familiar? While the technical aspects of the attacks and elements may differ, the design theme behind the Scorcher is very much like Zinogre in Iceborne. So this special Event Quest will have you hunting the thunderous beast Zinogre in Hoarfrost Reach. Make sure you’re Master Rank is 24 or above and bring some Thunder Resistance!

If Light Bowgun is not your style, but you still want to add some high-tech flair to your weapons, completing this Event Quest will get you a shimmering weapon pendant fashioned after Aloy’s Focus device.

Whenever you’re ready, head up to the Quest Board / Quest Counter and look for the Event Quest “Into the Frozen Wilds.” It is available now until January 10, 2020. 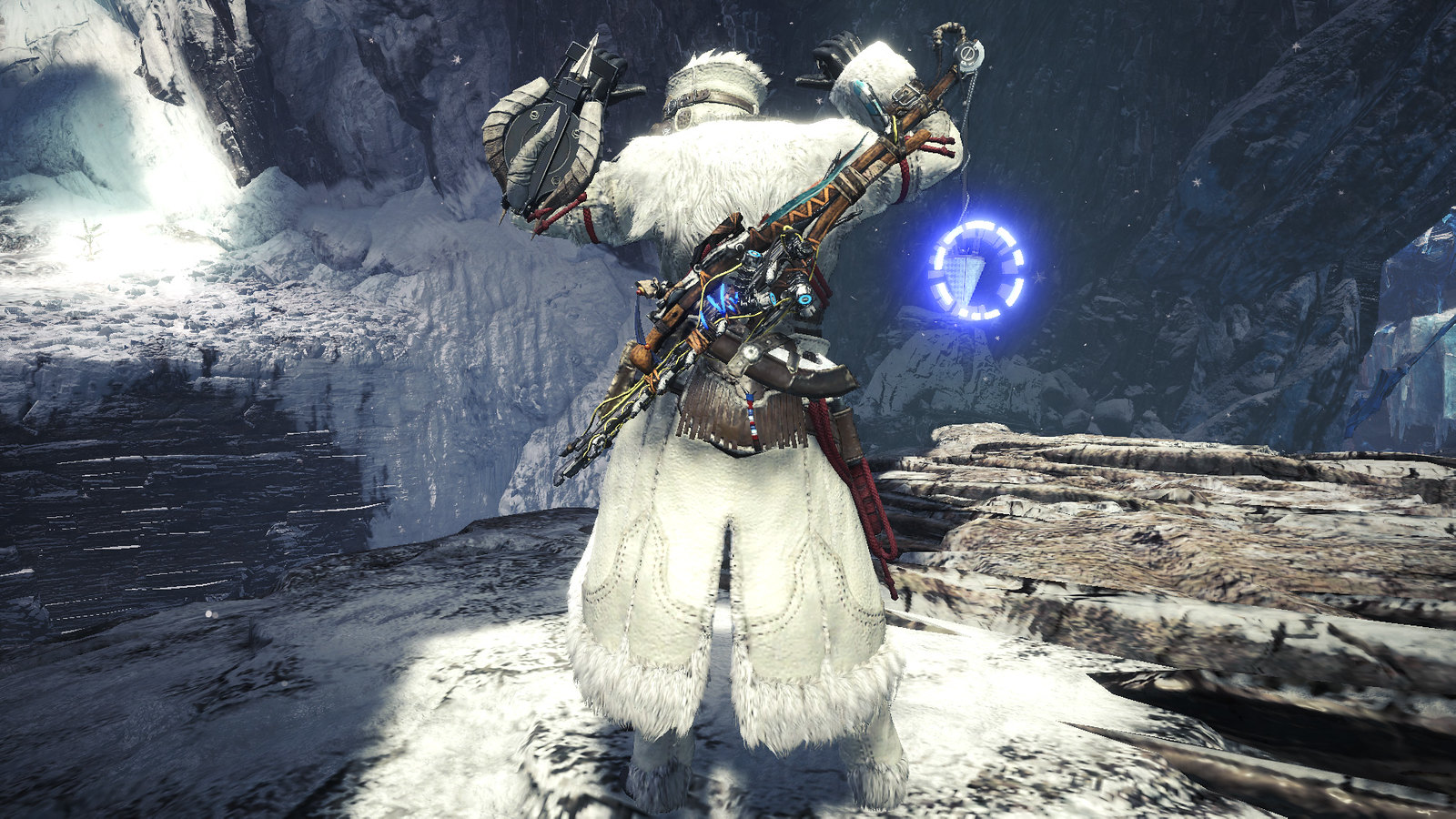 Shifting gears a bit, I just wanted to leave a quick reminder about a couple of other special Event Quests currently live in Monster Hunter World: Iceborne. Guest survivors from Raccoon City, Leon S. Kennedy and Claire Redfield make an appearance as Full Armor Sets for those who gather materials from completing the Event Quest “RE: Return of the Bioweapon” (keep some Green Herbs handy, unless you want to get Zombified). 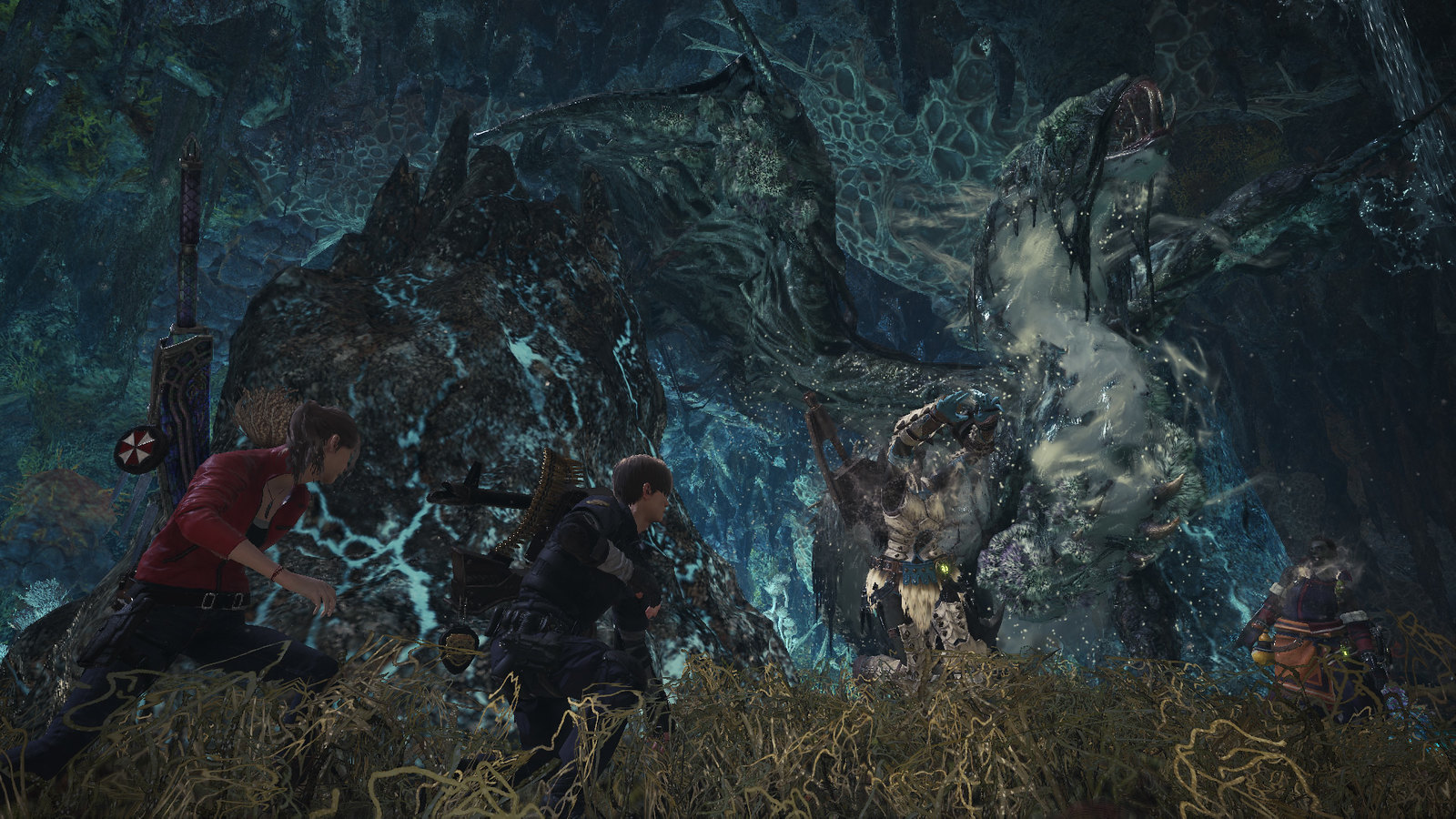 And the quests dubbed “Every Hunter’s Dream” II and III will let you craft the Wiggler Set α+ for your Palico and the “Black Eagle” Charge Blade that won our Palico/Weapon Design Contest earlier this year. They’re very cute and cool, respectively. 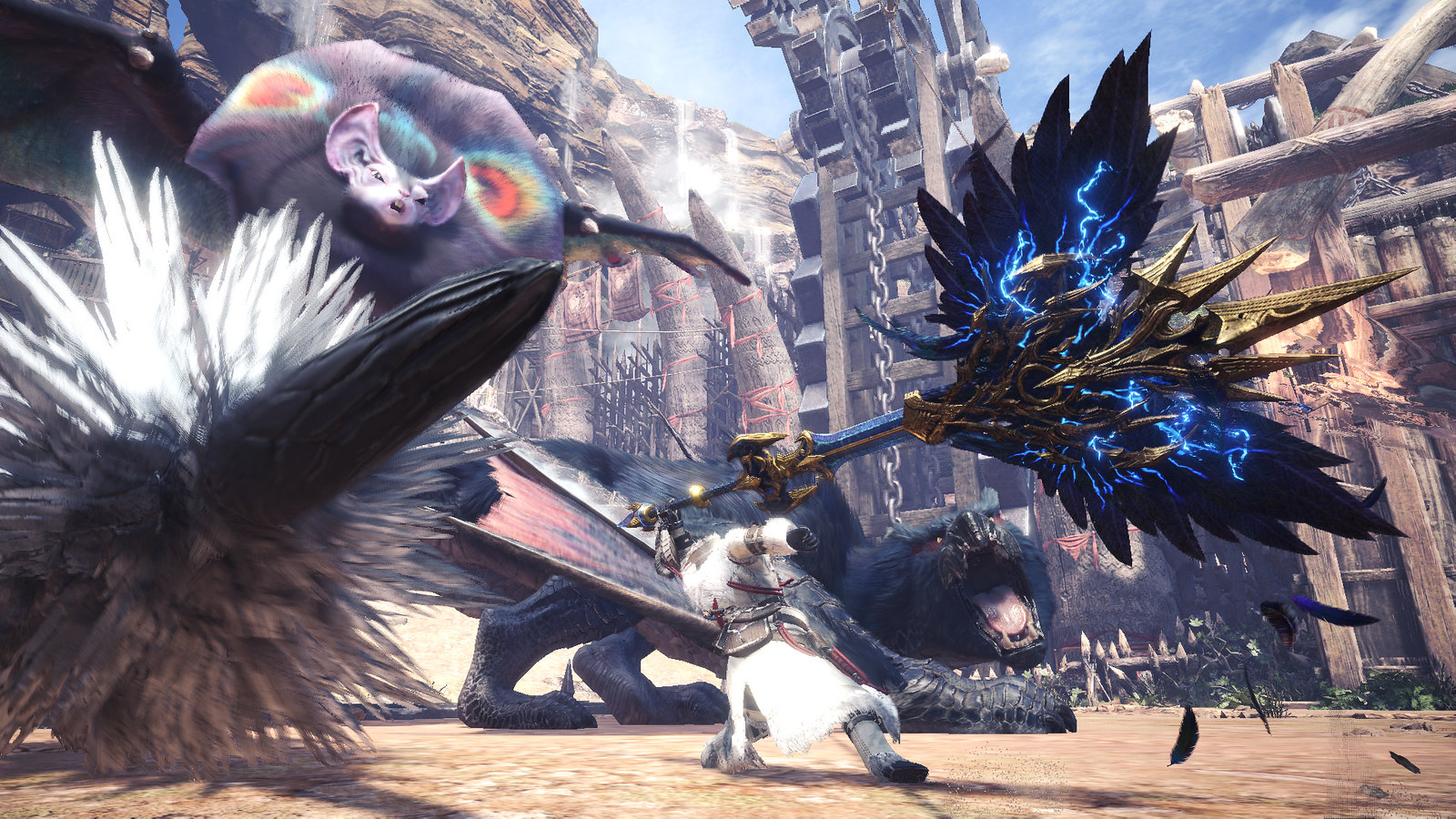 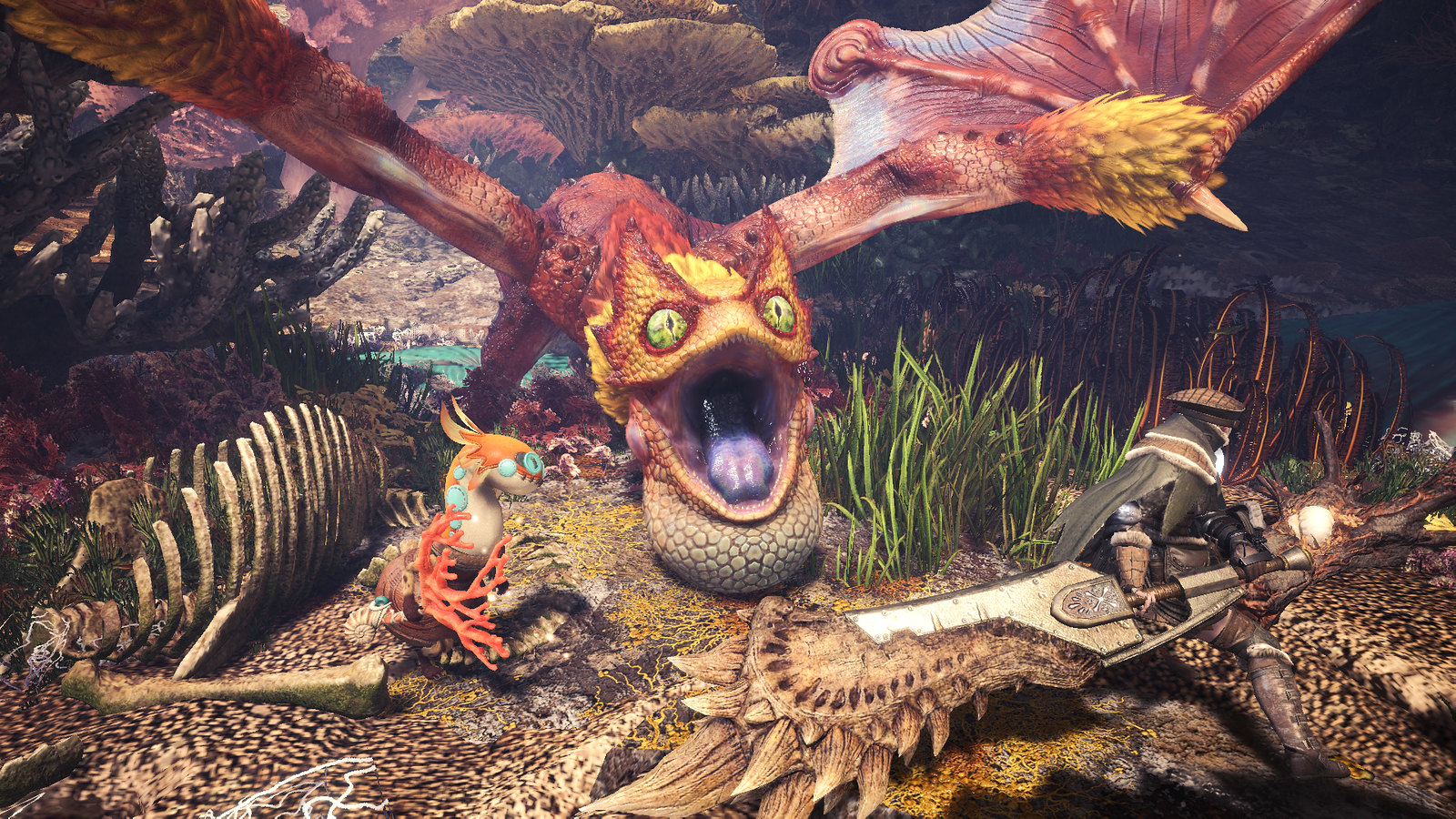 Finally, a friendly reminder that all this content is free for all Iceborne players… and we’re just getting started! We have another big free update lined up for December, and even more coming in 2020. So if you haven’t joined the hunt in Iceborne yet, there’s no better time than now, especially considering our early Black Friday discount: 25% off!

New hunters joining in through Monster Hunter: World or Iceborne Master Edition, look out for a free update in early December that will give you quick access to a set of beefed up weapons to help you quickly complete the MH:World storyline: the Defender Weapons.