Hearthstone: The 10 Best Boomsday Project Cards You Need To Compete

Hearthstone is a welcome addition to the Blizzard family for those who miss the real-time strategy of the Classic Warcraft PC games. The whimsical but deadly test of planning, plotting and surviving outright destruction launched in 2015.

The Boomsday Expansion for Hearthstone was released in August 2018, so players have already enjoyed almost ten months of weird science. That’s given us plenty of time to find out the essential cards to have in your deck. There are two neutral entries thrown in for good measure so each class can do a few extra crazy experiments.

Some of these cards are obvious choices while others may be surprising. Consider the benefits of a card two or three turns away.

The three-month offer of free decks is long over, so the following cards are obtainable through crafting, arena rewards or purchase in the store. So here are the best Boomsday expansion cards! 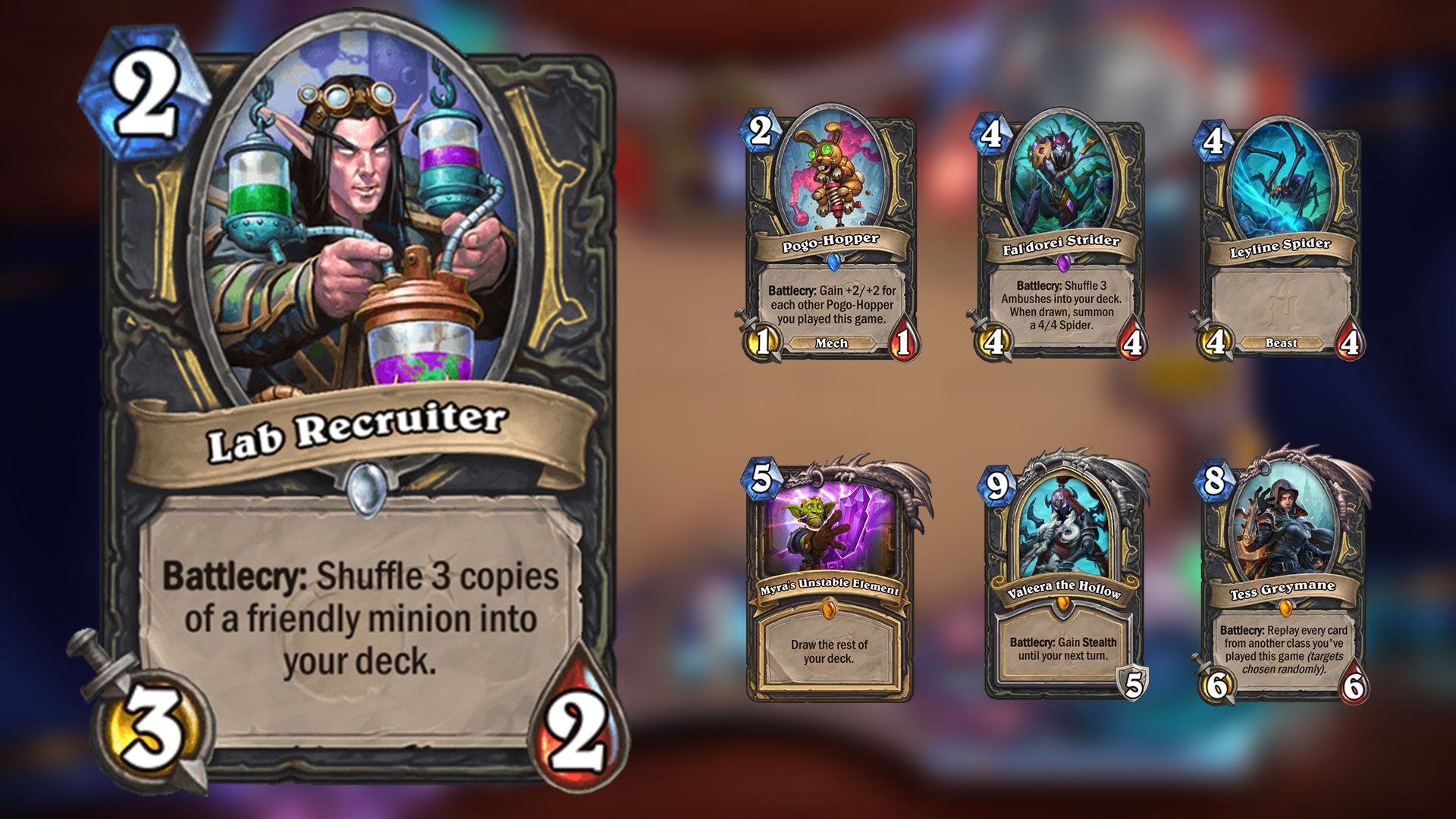 Build up your forces using this card that shuffles three copies of a friendly minion into your deck. At a cost of only 2 mana crystals, Lab Recruiter is useful in early rounds to build up your deck for a strong attack later. Use with other Rogue cards like Shadowstep and Cheat Death to repeat the effect. If you have the Augmented Elekk, an Epic card that’s also part of the Boomsday Project, you can double the effect of this card and get six minions. 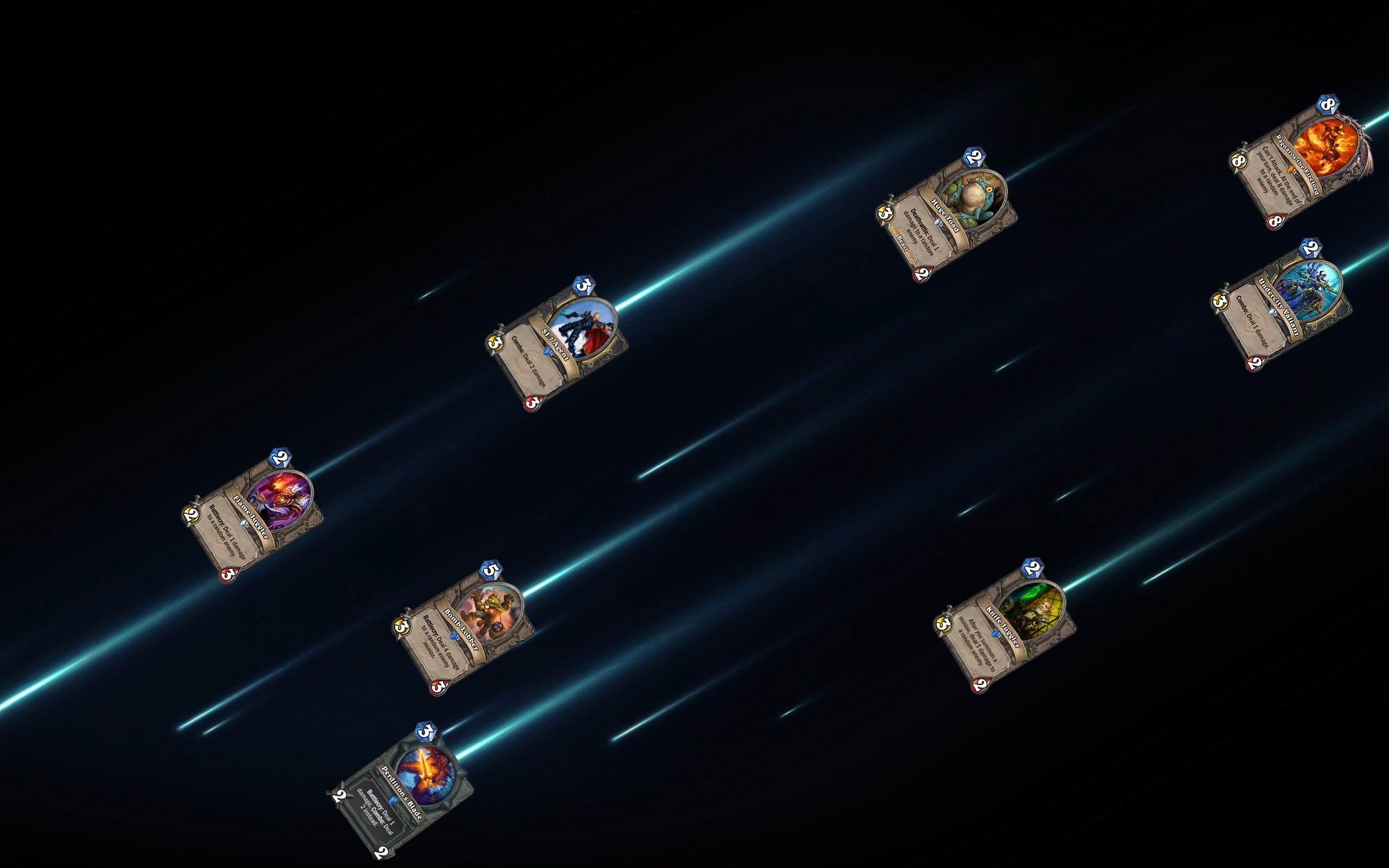 Why play with a Mage deck if you can’t enjoy some AOE? We need to gather our forces but we also need to destroy our opponent’s minions. This spell card can help pick off lower level minions and dent a few higher level ones.

At the cost of only a single mana crystal Shooting Star is a really good deal. Combine it with extra spell damage cards in both the Mage and Boomsday Project decks to make the destruction even more impressive. 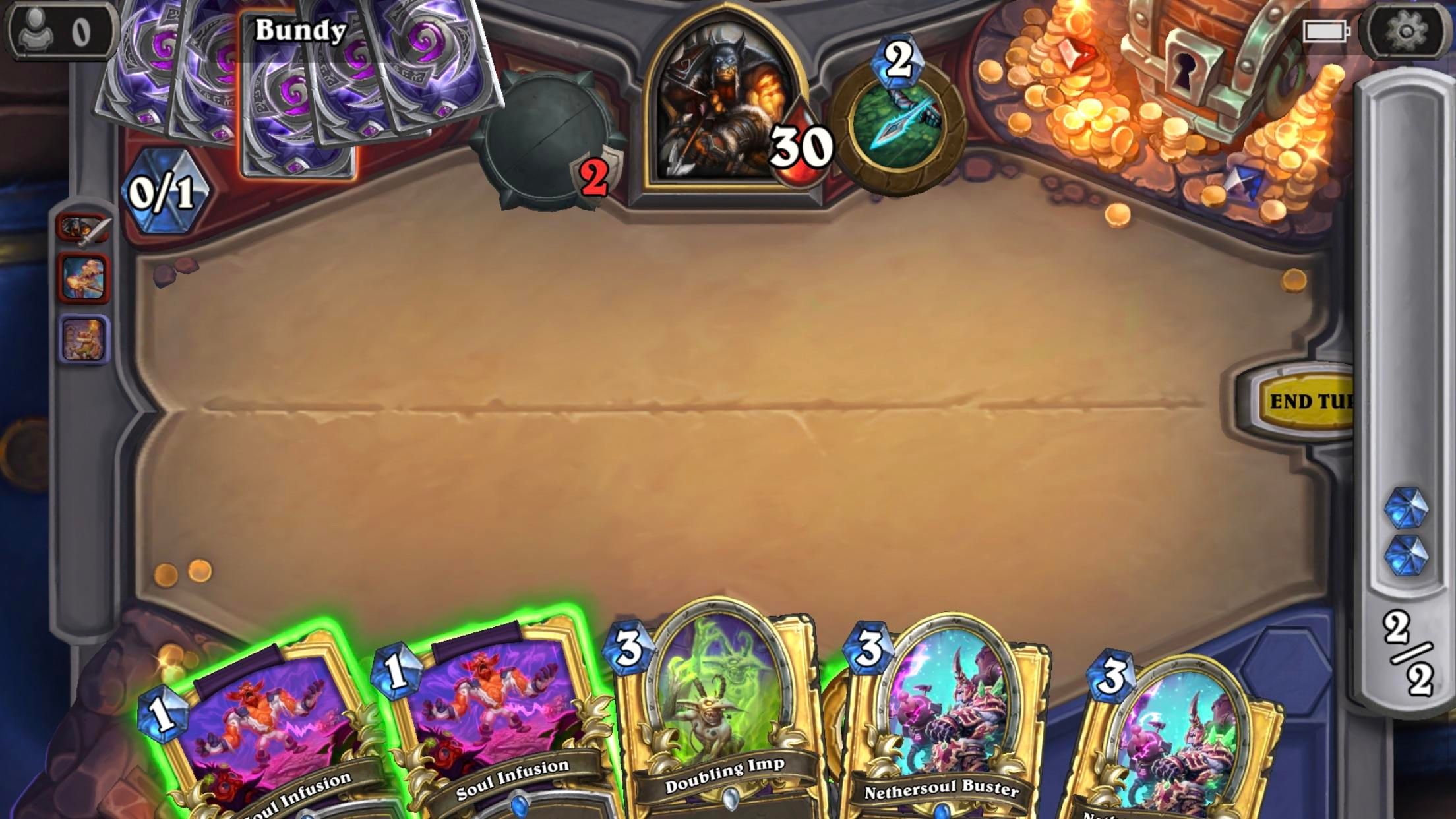 Demonic power and mad science, together at last. The Warlock set for the Boomsday project is so hideously wonderful that it’s hard to choose but the card dark wizards should have is Nethersoul Buster. Other classes don’t understand the benefit of doing damage to your own Hero. Warlocks can use this card to demonstrate. Ectomancy and Soul Infusion are nice combos with this card to both buff and duplicate your minions. Any buffs that apply to demons will also apply to the Nethersoul Buster. 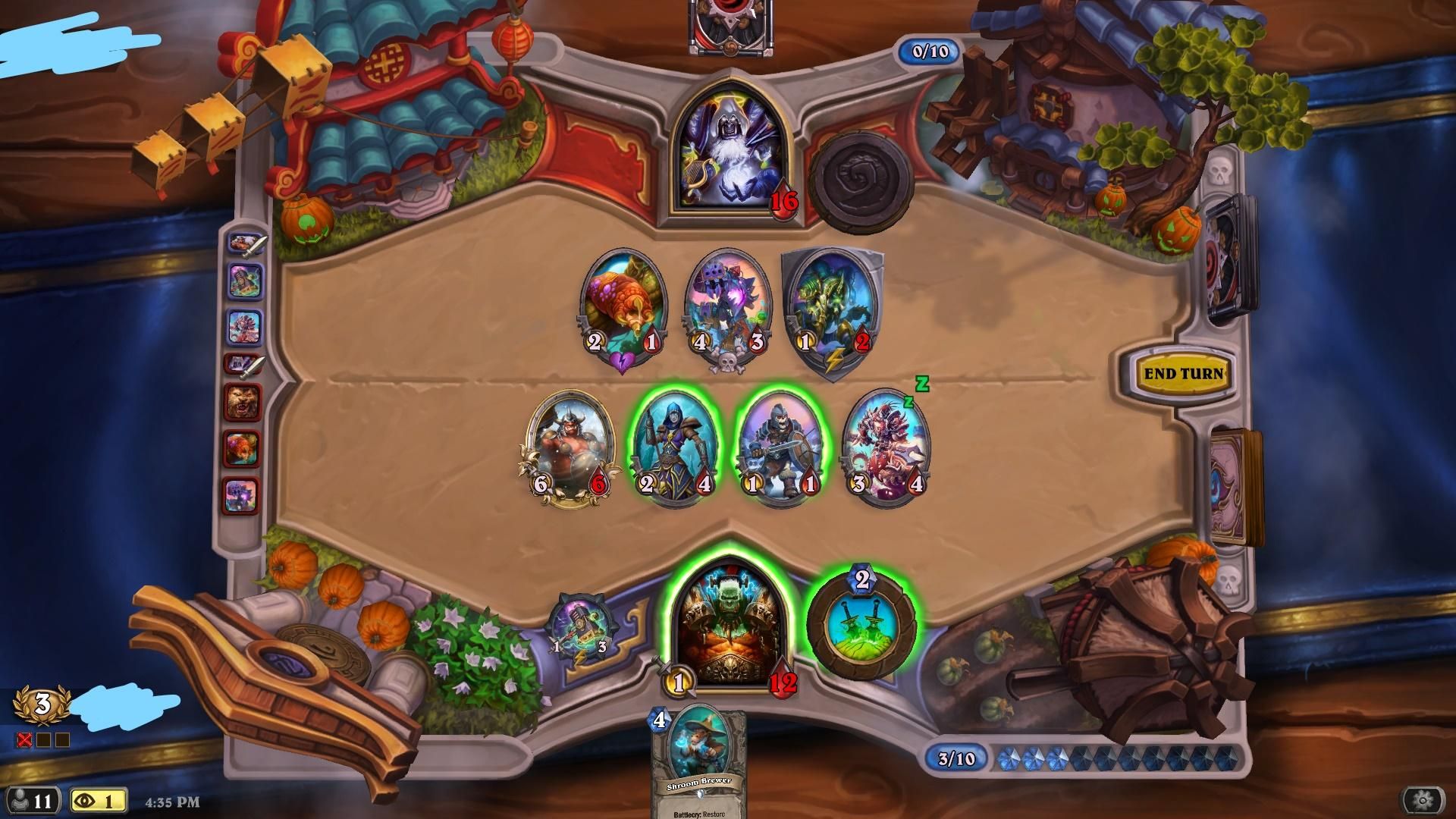 Five mana crystals is a high cost but this card is only useful when your opponent has more than one minion.

After performing its own attack, Supercollider steps back and lets the unfriendly minions do the work. The minion that was initially hit by Supercollider attacks an ally next to it. Keep the random damage under control by focusing on either edge of the board. Besides being useful, it’s just plain fun. 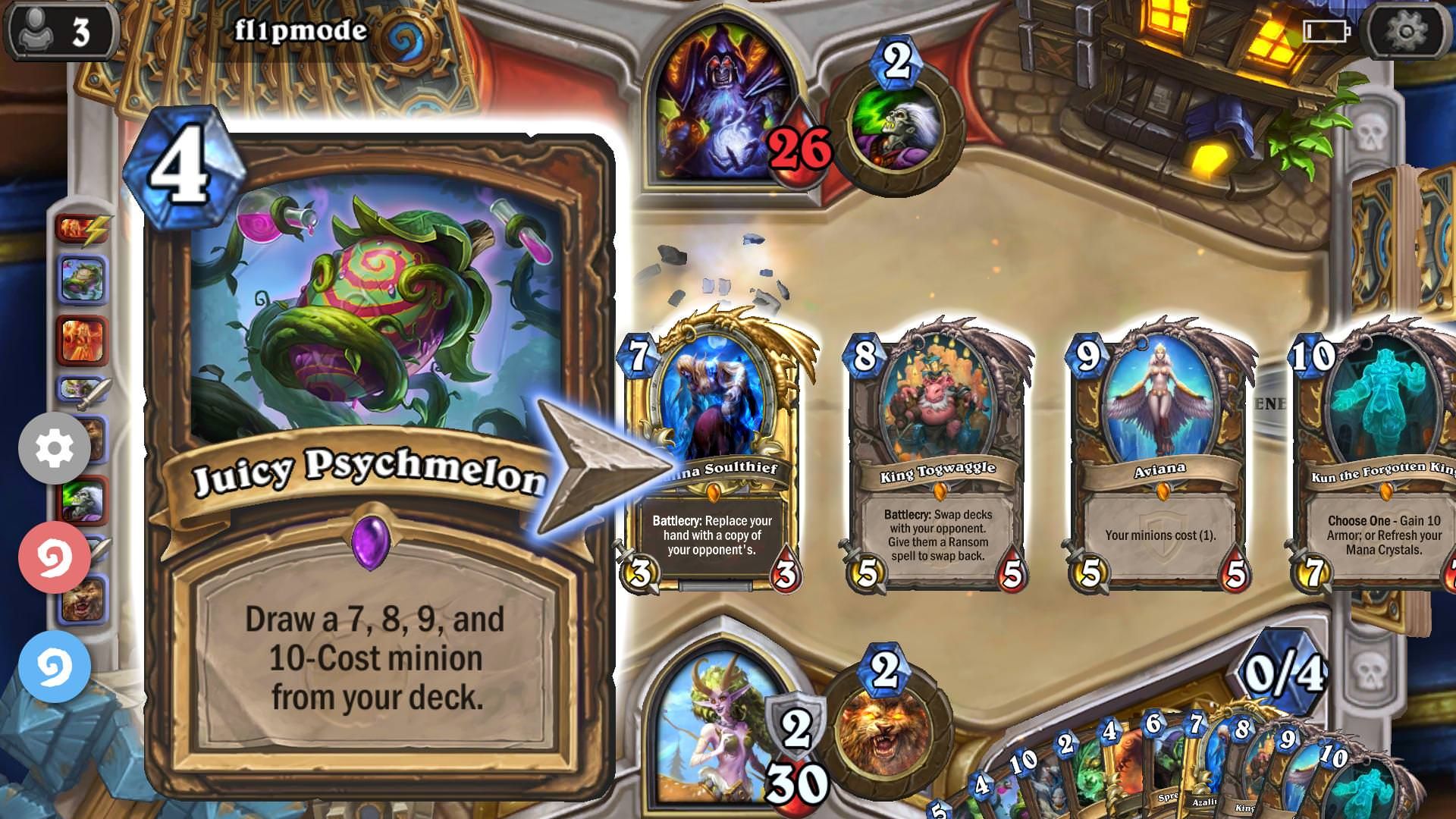 Druids have done pretty well in this expansion, especially those that like cards with a high mana cost. Combine Juicy Psychmelon with other Boomsday cards from the Druid deck and build up your forces even more. This card only requires four mana crystals so you can use it in earlier rounds. Execute Legendary combos with other Druid cards like Kun the Forgotten King or Neutral minions such as Malygos. 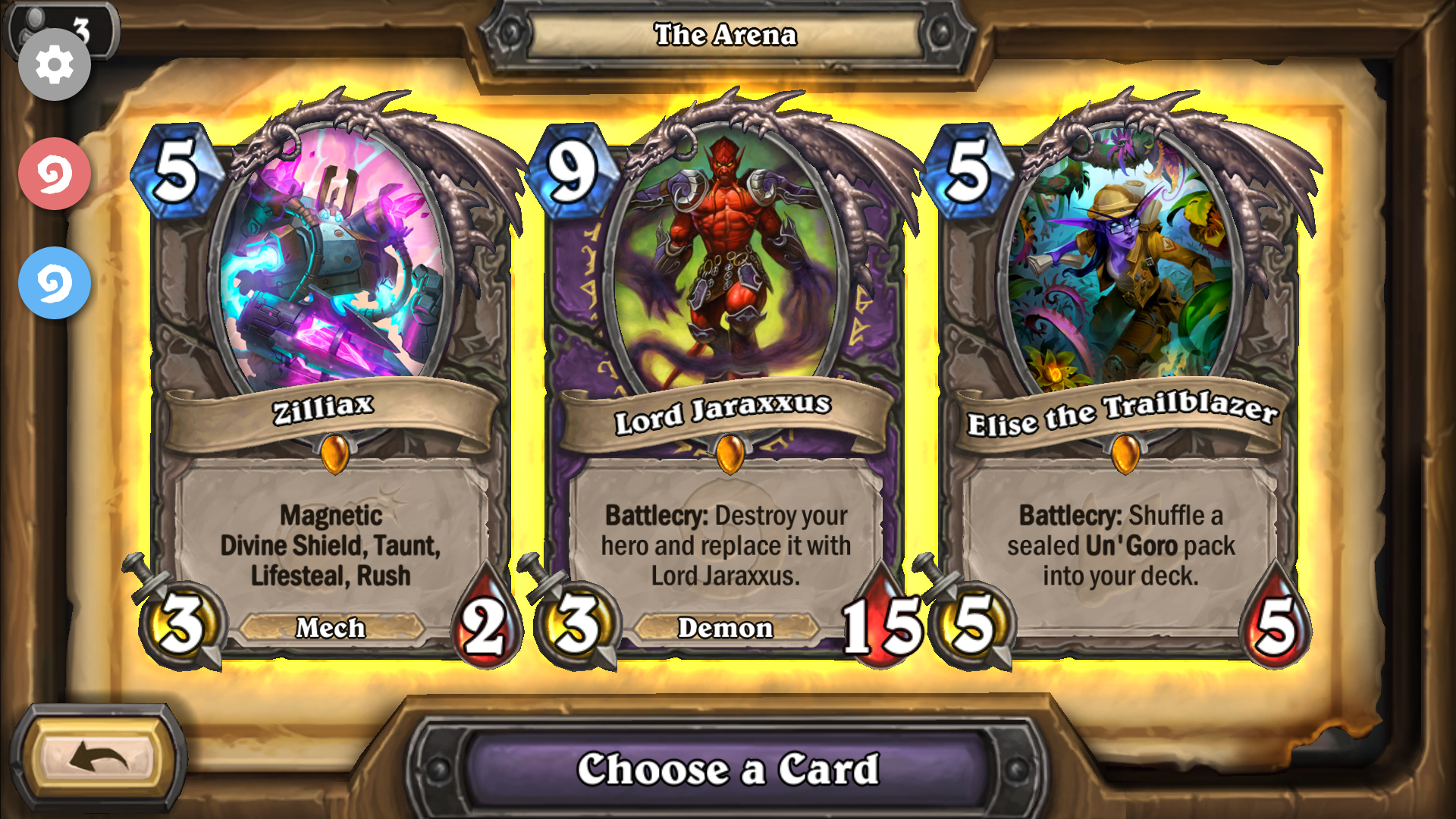 A Boomsday Card that’s essential for virtually any Control deck, this card makes up for lower stats with powers like Lifesteal and Rush. At a cost of five mana that’s a low price for a hardened tank with a variety of abilities. Use Valeera the Hollow or Giggling Inventor, other Neutral cards, to strengthen your defense even more. Any other cards in the Boomsday Project set that buff or resurrect Mecha will benefit Zilliax. 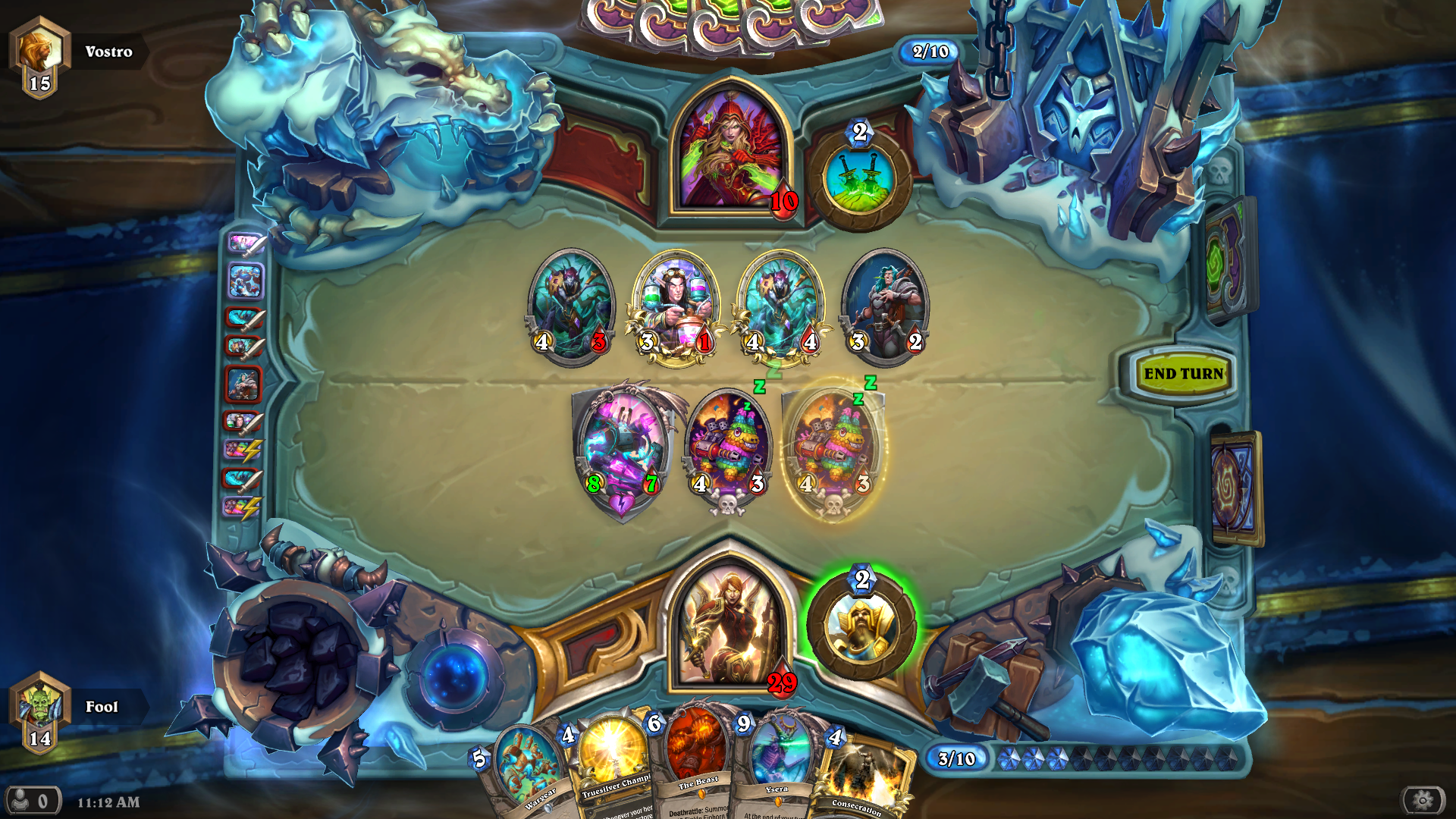 The longer you wait, the bigger the minions will be, so wait until you have seven mana crystals before calling on Kangor’s Endless Army.

RELATED: 15 Hearthstone Cards That Had To Be Banned (Before They Broke The Game)

Use with other Boomsday cards like Giggling Inventor or the Legendary tank Zilliax to build strong offensive and defensive positions. Those dead mechs even come back to life with the previous buffs, making this even more useful as a mana cheat and worth the high cost. 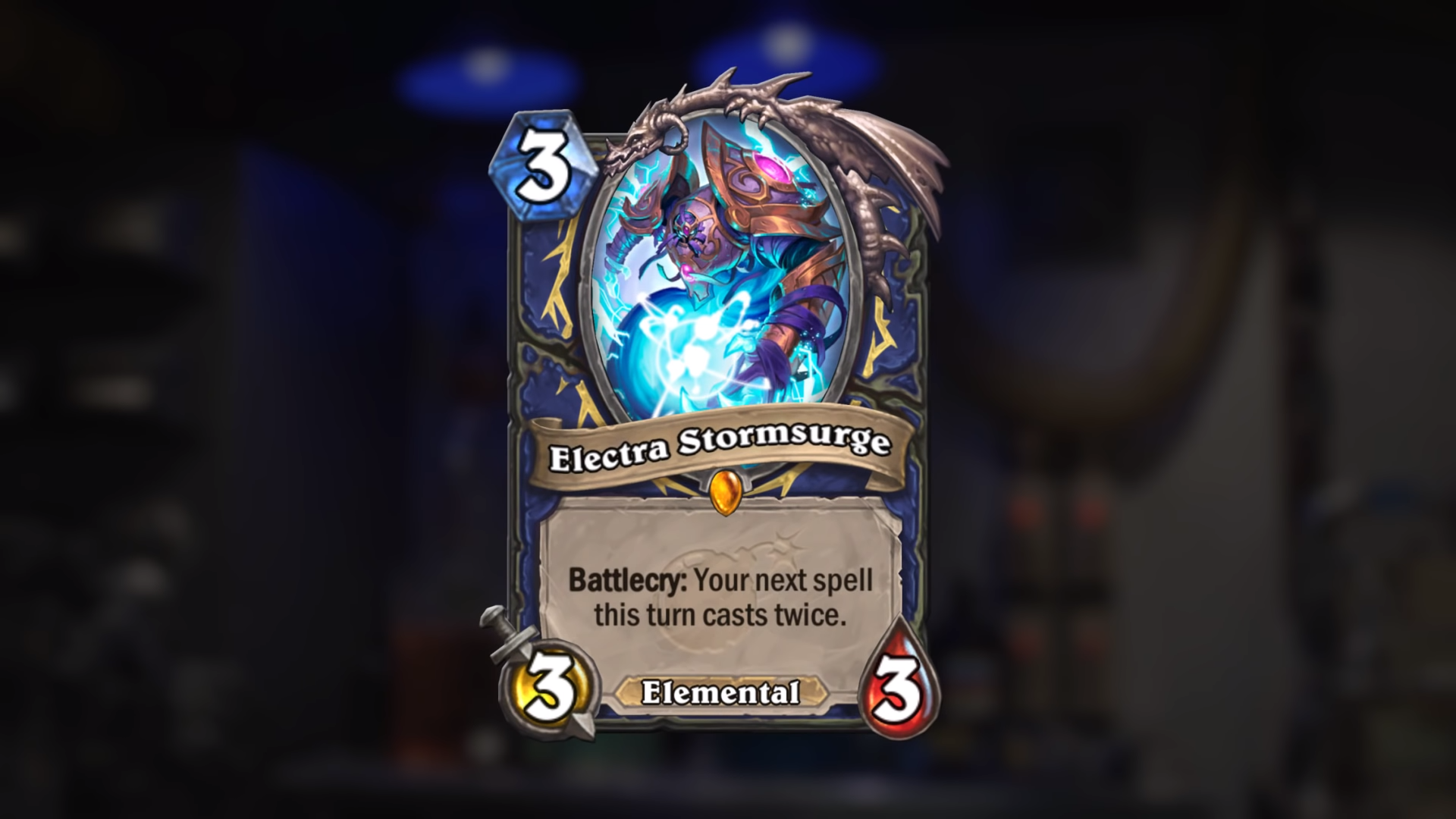 Electra Stormsurge is one of the most versatile cards in the expansion. It fits with several attack combos and deck builds. Use it with other Shaman cards like Volcano to clear the opponent’s side of the board. Healing Rain can restore friendly minions. If you have Earthen Might, a Shaman card from the Witchwood Set, use it in a combo to build a powerful Elemental minion with crazy stats. 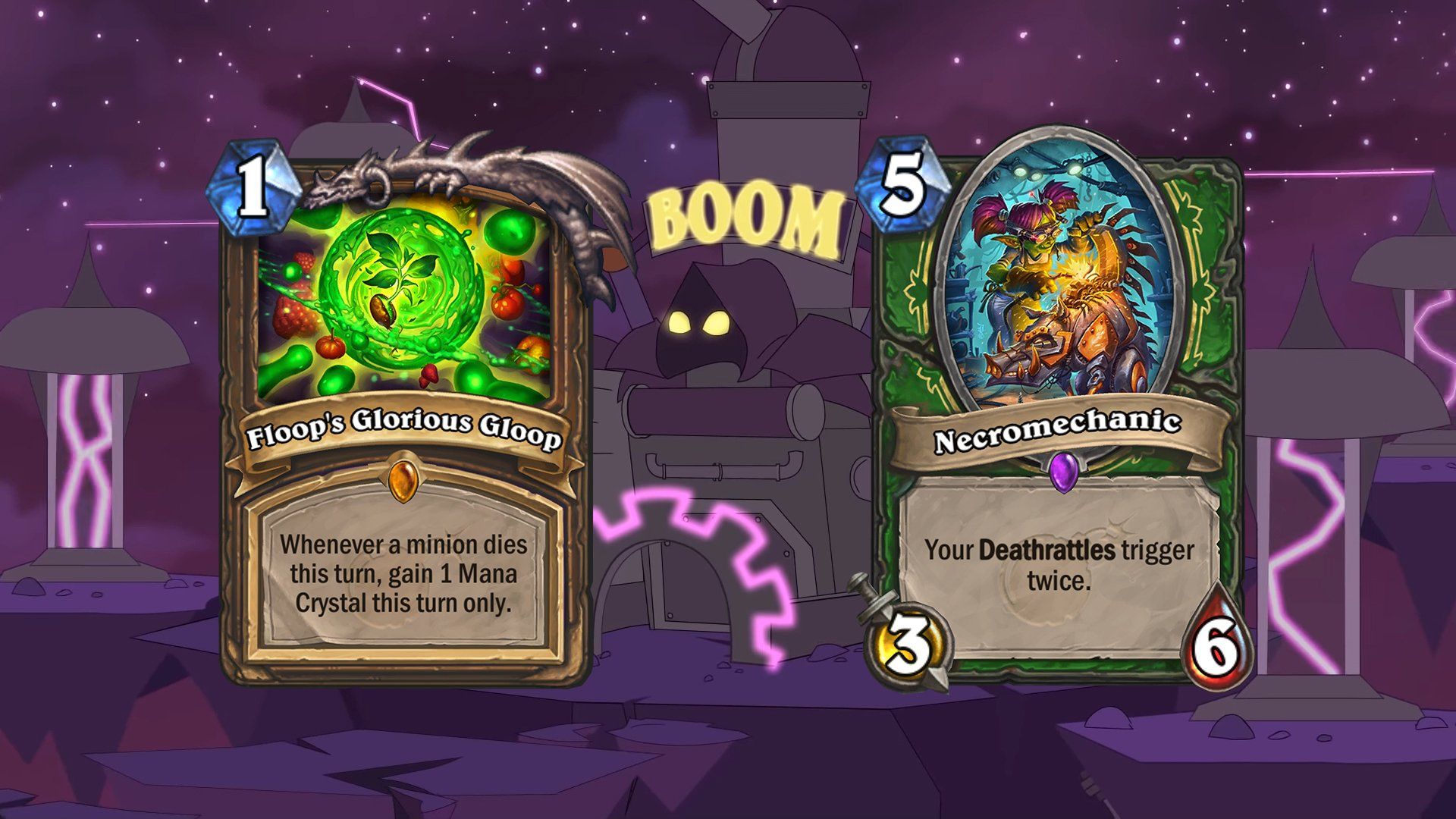 Max out those Deathrattle powers and use them to your advantage if you’re a hunter with several minions on the board. Spider Bomb and Cybertech Chip make a good combo with Necromechanic. The result is more minions and more damage that helps you overwhelm an enemy. Not only is this card typical of the Hunterès style but is also a nice addition to an Aggro deck. 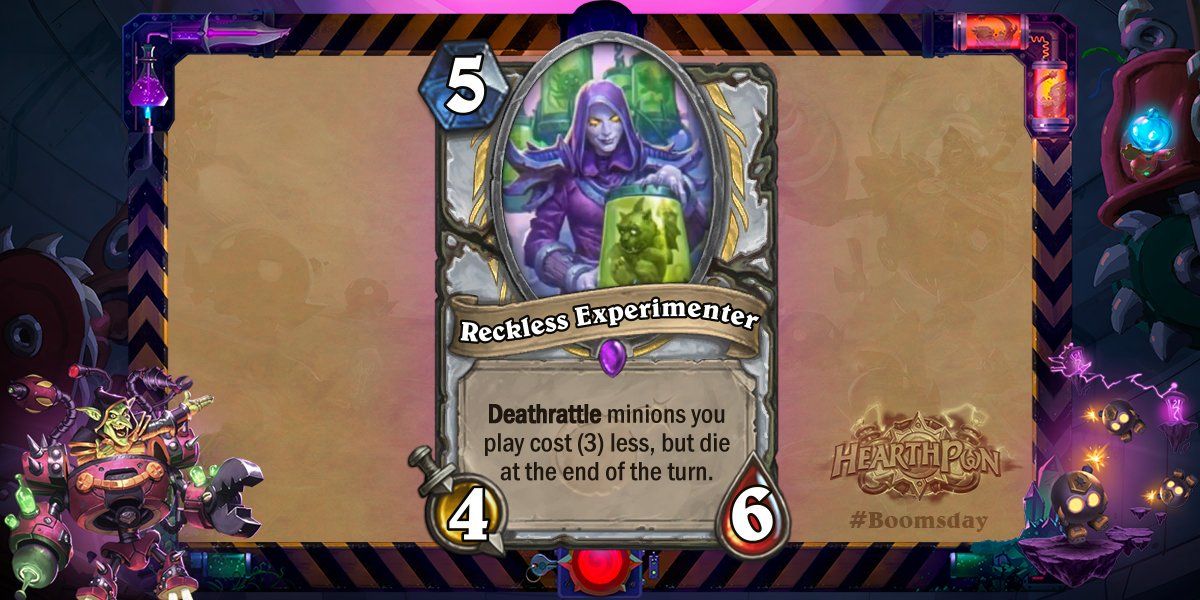 The Reckless Experimenter has an ironic name since you have to be thinking in advance when you use it. The card has decent stats to stay up and do some damage before giving you the benefit of a short-lived but powerful Deathrattle. Build up your minions but be prepared to lose your army at the end of the turn, so make sure this one counts. Use with Omega Medic, another Priest card from the Boomsday Set, to double your mana power.

The Boomsday Project brings fantastic science to the Hearthstone playing table by adding exciting goblin devices and undead experiments into each deck. There’s something for the mad chemist of every class in this expansion.

A new set of creative Hearthstone cards is coming soon. Rise of Shadows, the first expansion for 2019, is the next hotly anticipated expansion. There’s nothing like some evil to go along with the insanity of explosive discovery.

NEXT: Activision Turned Down A New IP From One Of Its Most Profitable Devs