‘He has an obligation to them’: Attorney for ‘QAnon shaman’ asks Trump to pardon rioters 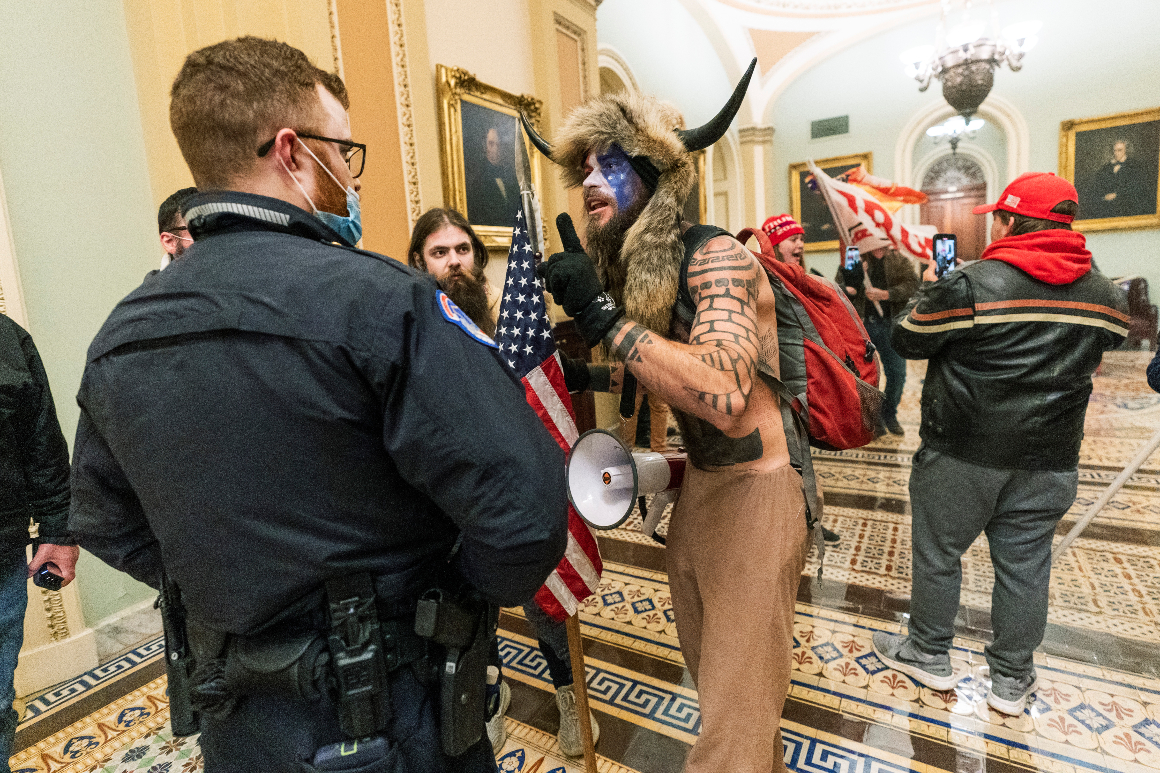 The lawyer for the “QAnon shaman” who was part of the deadly siege of the Capitol last week publicly petitioned President Donald Trump on Thursday to pardon his client.

In an interview on CNN, attorney Albert Watkins said his client, Jacob Chansley, “felt like he was answering the call of our president” when he stormed the nation’s seat of government last Wednesday during a riot that resulted in the deaths of at least five people.

Chansley, a 33-year-old man from Phoenix also known as Jake Angeli, was one of the most recognizable perpetrators of the Capitol siege. He carried a spear, wore a furry horned headdress and painted his face in shades of red, white and blue.

On Tuesday, Chansley became one of the first three people indicted by federal prosecutors in connection with the violence at the Capitol. He was charged with a felony violation of the Federal Anti-Riot Act, as well as obstruction of Congress and other offenses.

In a filing on Thursday, prosecutors said Chansley was as “an active participant in” and “the most prominent symbol of” what they described as a “violent insurrection.” Prosecutors also said Chansley had expressed his intention of returning to Washington, D.C., for President-elect Joe Biden’s inauguration next week.

The language in the filing suggests more severe charges, such as sedition or insurrection, could be coming for those involved in the siege.

Watkins, Chansley’s attorney, said on Thursday that his client, “like a lot of other disenfranchised people in our country, felt very, very, very solidly in sync” with the president — suggesting Chansley was incited to storm the Capitol in Trump’s name.

Prior to the Capitol siege, the president, his family members and his political allies riled up his supporters at a rally on the White House Ellipse. When it was his turn to speak, Trump urged those in attendance to march on the Capitol amid Congress’ certification of Biden’s Electoral College victory.

“If you don’t fight like hell, you’re not going to have a country anymore,” Trump said. He also said that “you’ll never take back our country with weakness. You have to show strength, and you have to be strong.”

On Thursday, Trump became the only president in American history to be impeached twice — this time, in a bipartisan vote on a single count of “incitement of insurrection.”

“We all have to understand that the words that were spoken by the president meant something, not just to my client. They meant something to a lot of people,” Watkins said in his interview.

“They listened to those words. And those words meant something to them. And they had a right to rely on the words of their president that was strewed forth worldwide,” he said. “And they did. And now they’re turning around [and] they’re getting arrested, as well many should be.”

Pressed by host Chris Cuomo on what exactly he would like Trump to do, Watkins replied: “Oh, give a pardon.”

As Chansley’s attorney, “my role is not to judge somebody. My role is to be an advocate,” Watkins said. “If there’s one iota of a chance that the guy who’s the president of our country — who invited everybody down Pennsylvania [Avenue] — will give my client a pardon, you know what? I’m going to do it.”

Watkins acknowledged, however, that his plea was unlikely to succeed. “Am I holding my breath thinking that Donald Trump is going to be sitting around going, ‘You know what? … What’s the name of that guy with the horns? Yeah … let’s give him a pardon.’”

But “with Trump, you never know,” Watkins said. “He may say, ‘I want the guy with the horns.’ Next thing you know, maybe he’s represented by the shaman instead of Rudy Giuliani.”

Watkins went on to compare the president’s supporters who stormed the Capitol to the Jonestown cult members who committed mass suicide at their settlement in Guyana in 1978: “You know the only thing different here? There’s no Kool-Aid.”