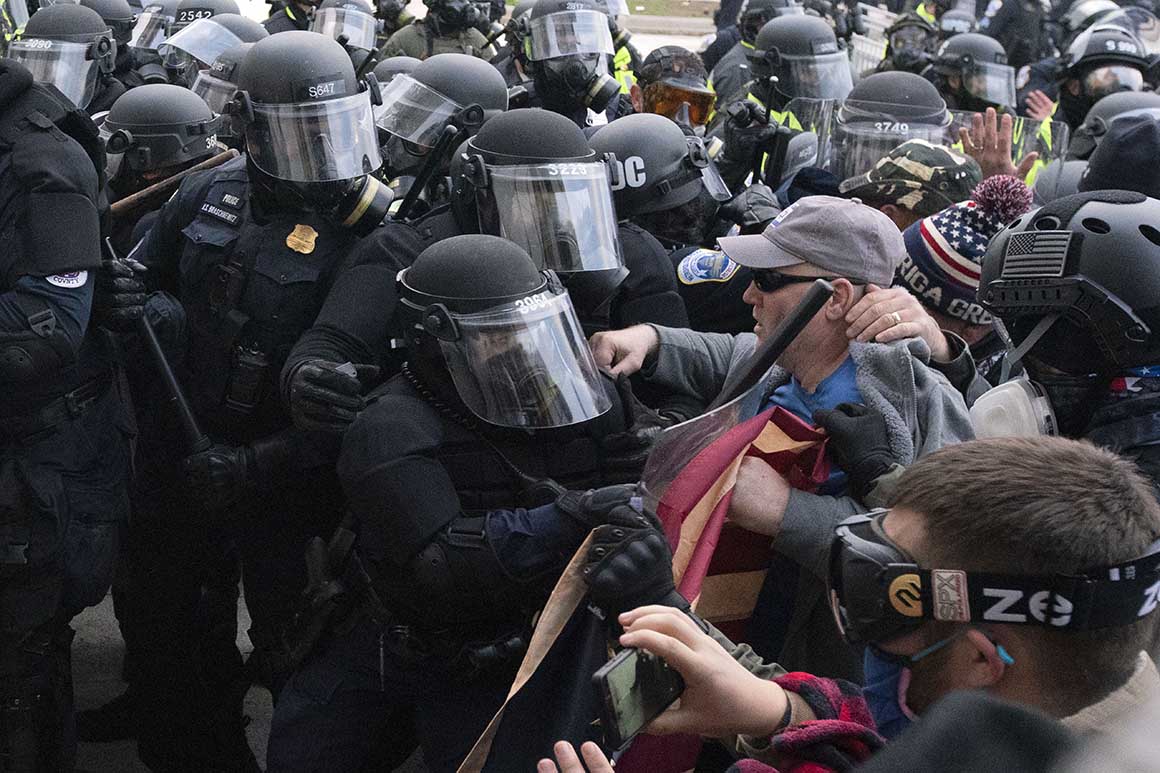 The lead prosecutor overseeing the investigation into the Capitol riot backed away Friday from a suggestion in a court filing that participants in the takeover of Congress last week were seeking to take officials prisoner and potentially even execute them.

Images of intruders with zip-tie handcuffs and video of protesters chanting “Hang Mike Pence” have led many lawmakers and other observers to conclude that some in the crowd were intent on capturing — and possibly killing — prisoners.

However, acting U.S. Attorney Michael Sherwin told reporters Friday that prosecutors don’t have concrete proof of such an effort.

“Right now, we don’t have any direct evidence of kill/capture teams,” Sherwin said.

Sherwin’s contention undercut the flat assertions made by federal prosecutors in Arizona, who described in a court filing Thursday what they called “strong evidence” that Capitol rioters intended “to capture and assassinate elected officials in the United States Government.”

The D.C. prosecutor suggested those claims were the product of miscommunication or lack of coordination in what has become a sprawling investigation seeking to question and arrest suspects who have returned to their home states after traveling to Washington for the pro-Trump protest that turned violent on Jan. 6.

“There were other prosecutors. That may be a disconnect that may be adding information that’s not directly related to what we have,” Sherwin said.

Though Sherwin disclaimed specific knowledge of the rioters’ intent, he said investigators are carefully examining potential planning for the event. The prosecutor seemed to dismiss the notion of an overarching plan, but said officials are looking into the possibility that smaller groups may have coordinated in advance of and during the assault.

“There are breadcrumbs of organization in terms of what maybe was taking place outside the Capitol went inside with perhaps some type of communication with core groups of people ingressing into the Capitol and some coordination with individuals within the Capitol,” Sherwin said. “That is a tier one, top priority for both the U.S. Attorney’s office and our law enforcement partners to see, again, whether there was this command and control and whether there were indeed organized teams that were organized to breach the Capitol and perhaps try to accomplish some type of mission inside the Capitol.”

Sherwin did not back away from other explosive elements of the Arizona filing, which described the Capitol siege as an attempt to overthrow the U.S. government, and part of an “insurrection movement” that is still ongoing. The filing was submitted as part of a bid to deny bail to a QAnon conspiracy follower and self-described shaman charged in the riot, Jacob Chansley.

Sherwin said that as of Friday morning, 98 criminal cases have been filed related to the riot, most of them including felony charges. He said he expects that number to grow “exponentially” in the coming days and also to involve more serious charges against some alleged rioters — perhaps including seditious conspiracy charges.

Sherwin said he was particularly disturbed by the presence of current and retired law enforcement officers in the mob that fought with police. One Capitol Police officer died following the melee and dozens of other officers were injured.

So far, two off-duty police officers from Rocky Mount, Va., have been charged, along with a retired firefighter from Pennsylvania.

“Unfortunately, as this case goes on, we’re seeing indications that law enforcement officers, both former and current, maybe had been off duty and participating in this riot activity,” Sherwin said. “We don’t care what your profession is, who you’re who affiliated with. If you are conducting and you are engaged in criminal activity, we will charge you and you will be arrested.”