Cyberpunk Games to Play While Waiting For Cyberpunk 2077 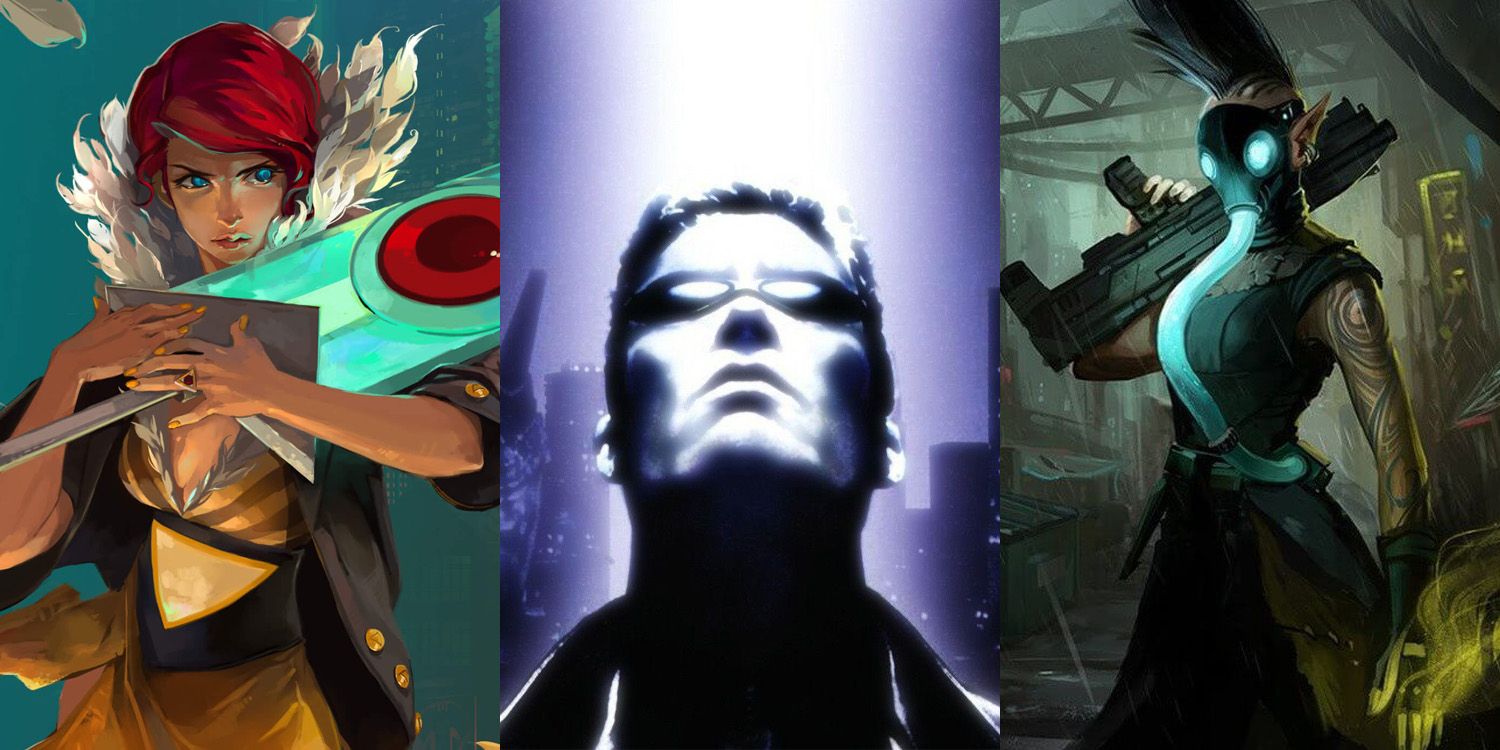 Strictly speaking, this modern world is a Cyberpunk setting; it’s filled with powerful Mega-Corps, cybernetic prosthetics, deadly hackers, pollution and a cyberspace network that influences everything. At the same time, this reality is missing a few key stylistic touches: the neon lighting, ’80s hairstyles, cranial head-jacks, street samurai and punk rebels against an uncaring system.

The upcoming Cyberpunk 2077, under development by CD Projekt Red (The Witcher franchise) seeks to embrace and update these stylings, immersing players into the role of V, a cyberpunk mercenary trying to make it big in a city of crime, cyborgs and deadly hackers. Cyberpunk 2077 has a new release date of September 2020, but players looking to scratch their Cyberpunk itch before then should check out these titles – classic games that “hack’ into their own sector of the Cyberpunk Genre. 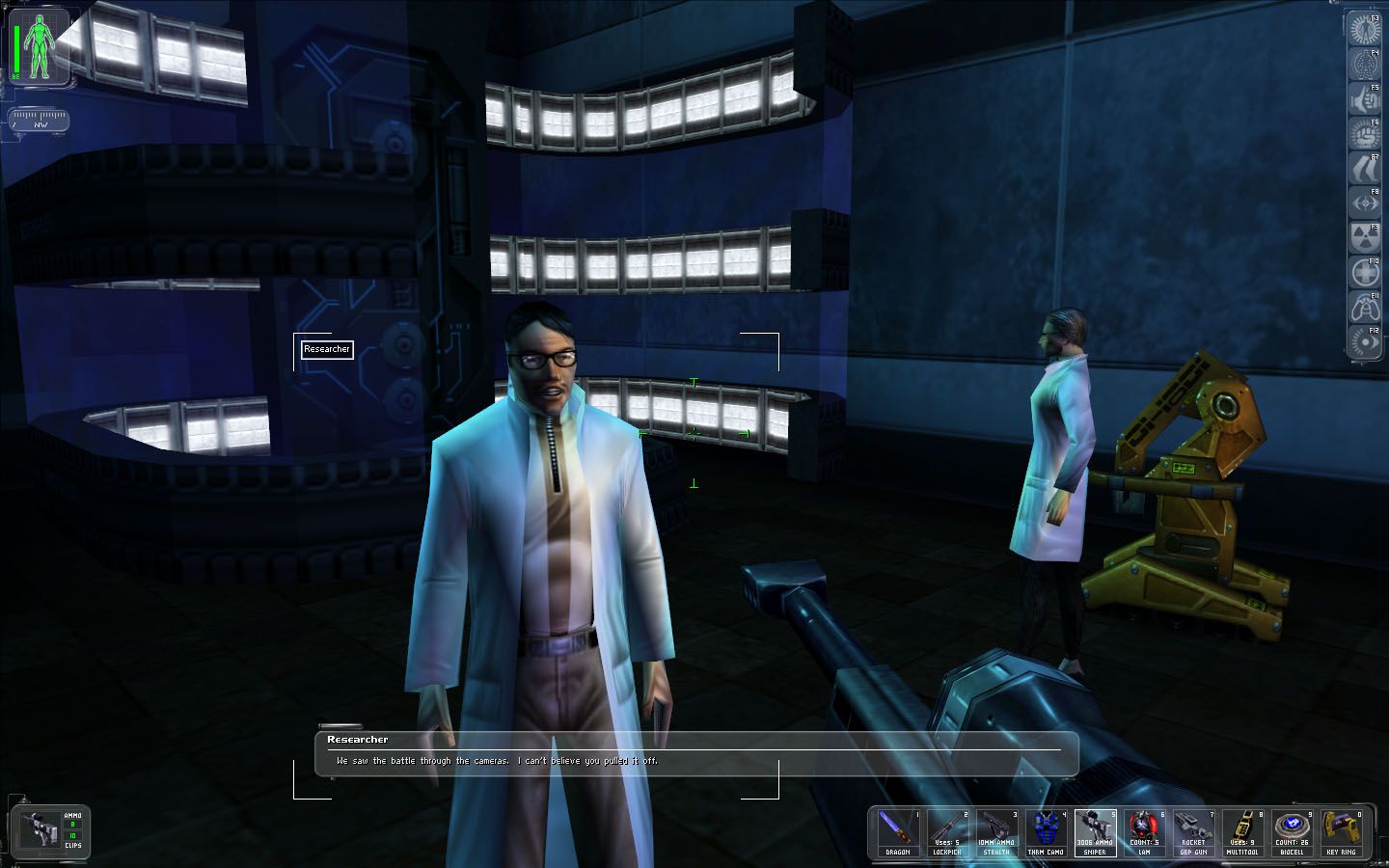 An oldie but a goodie, Deus Ex throws players into a setting soaked in the social themes of Cyberpunk, a world of augmented secret agents, nanotech plagues, class warfare and scheming conspiracies. This FPS/RPG hybrid, released in 2000, gave players an unprecedented amount of freedom through skill systems and dialogue trees that let the protagonist complete missions using violent and non-violent approaches alike.

Related: Cyberpunk 2077 Multiplayer Won’t Be Coming For A Long Time Yet

Sequels and prequels such as Deus Ex: Invisible War, Deus Ex: Human Revolution and Deus Ex: Mankind Divided expanded on the gameplay of Deus Ex while exploring the philosophical and social implications of cybernetic augmentation. 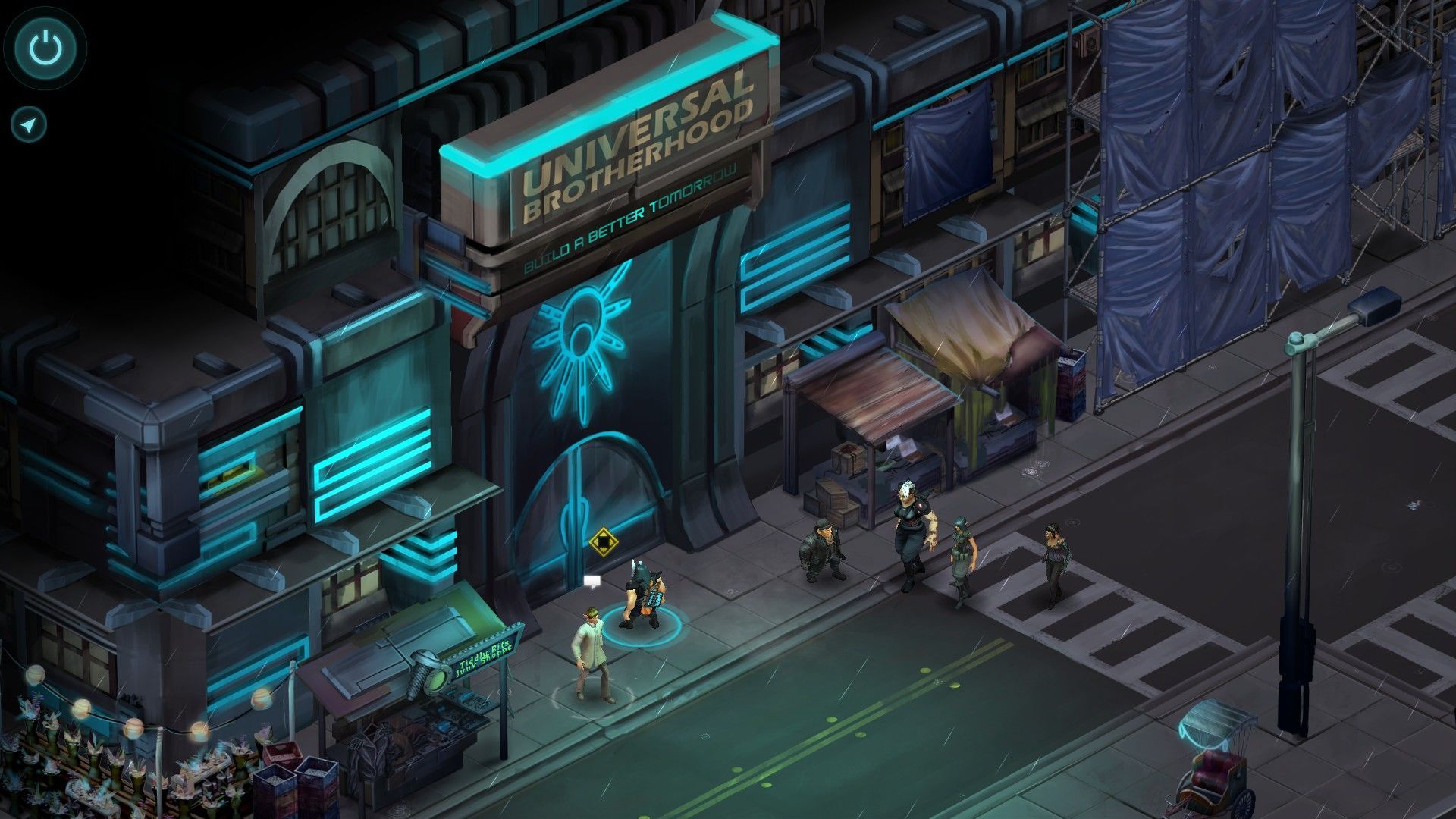 What’s better than Cyberpunk? Cyberpunk with elves, dragons and magic. Shadowrun Returns, a tactical RPG inspired by the Shadowrun tabletop roleplaying games, focuses around the titular Shadowrunners – urban mercenaries who do dirty jobs for dirty clients in a cyberpunk world populated by magic and fantasy races. One of the few titles that lets gamers play a Dwarvish Decker working with an Elf Cyborg and Troll Shaman to break into a corporate complex owned by an angry dragon.

The sequels, Shadowrun: Dragonfall and Shadowrun: Hong Kong takes players from Seattle to the streets of Berlin and Hong Kong, embroiling their runner crews in deadly gang wars and the plots of feuding Mega-Corps. 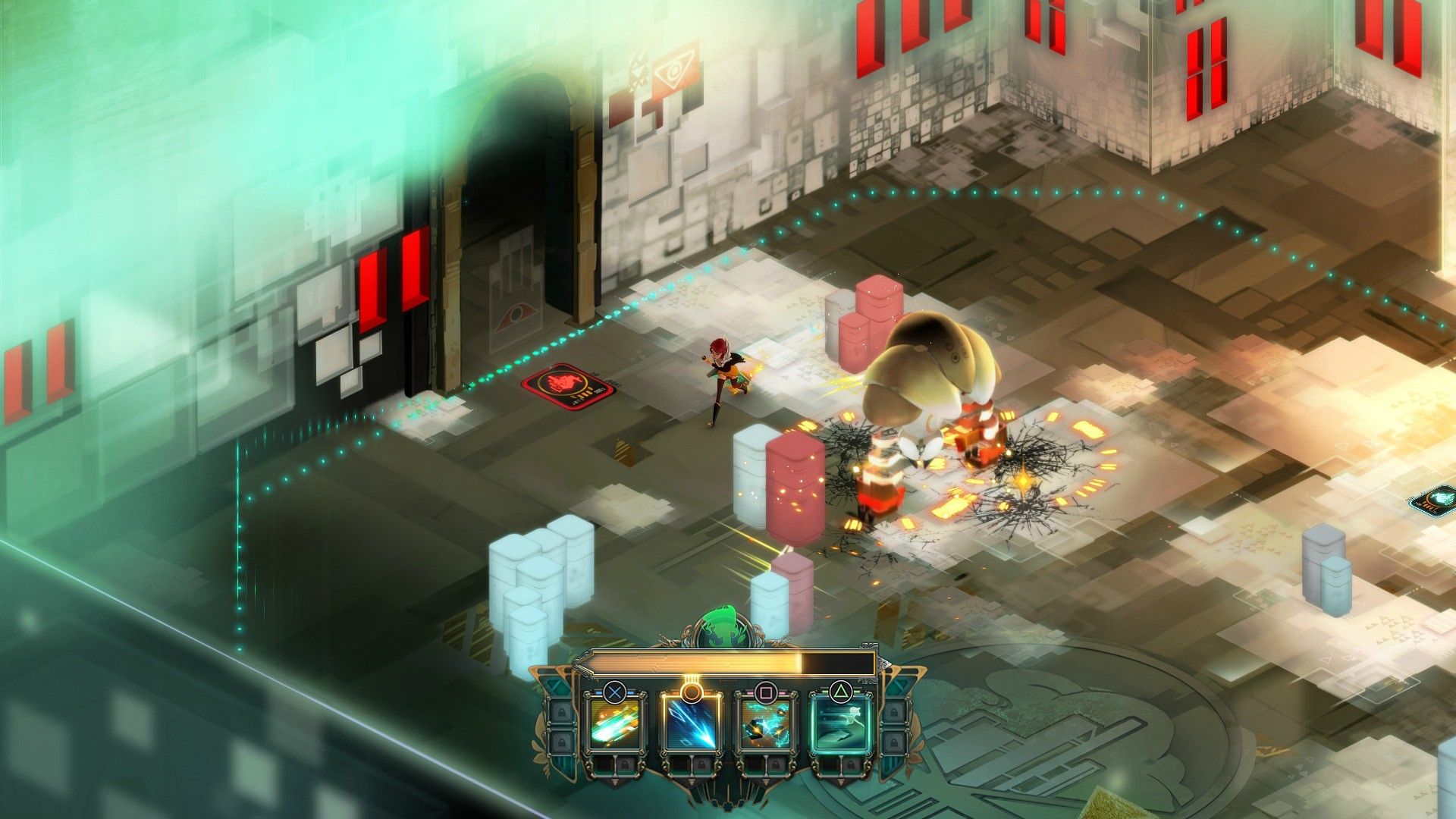 Made by the developers of Bastion, Transistor throws players into the shoes of Red, a nameless, voiceless singer with a talking neon sword, fighting for survival and answers in a techno-noir city slowly being consumed by a mysterious robotic Process.

Transistor’s gameplay combines hack’n’slash gameplay with a turn-based tactical mode, a haunting musical soundtrack and an enigmatic take on the cyberpunk genre that blurs the lines between virtual and physical reality. Keep a lookout for clever references to computer programming languages. 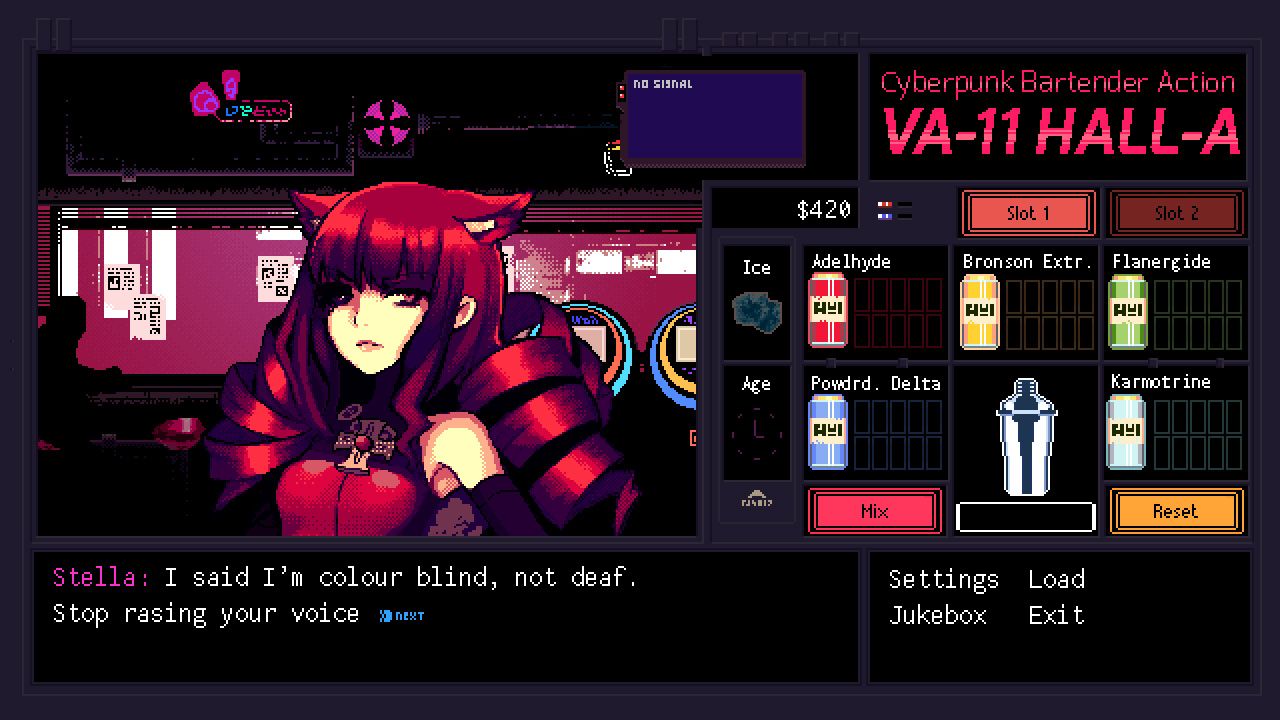 Even in a Cyberpunk Dystopia, someone needs to serve the drinks. VA-11 Hall-A: Cyberpunk Bartending Action takes a step back from the super-hackers and street samurai to focus on the service industry, where a stressed-out bartender tries to read the room and serve their clientele the perfect drink for their situation. The charm of this indie title lies in its wide range of characters, citizens of the neon streets with their own unique troubles and dreams that they reveal to players after imbibing the key ratio of cocktail ingredients. VA-11 Hall-A: Cyberpunk Bartending Action is the perfect title for cyberpunk fans who want to step away from ultra-violence and get a closer look at the lives of everyday people in a cyberpunk world.

The Cyberpunk genre has always been a social kind of science fiction. The advanced tech, neon/chrome visuals, and computer hacking tends to grab the spotlight, but the heart of Cyberpunk is about how technology affects the human condition: how it enhances, addicts, liberates and controls us, particularly when exploited by unscrupulous figures. Modern cyberpunk video games like Cyberpunk 2077  lean into this concept, evolving the retro 80s aesthetics of classic cyberpunk to keep the genre relevant for players who live in a world beset by corruption, poverty and tension over technological progress.