cleaning the house, tending the weeds. 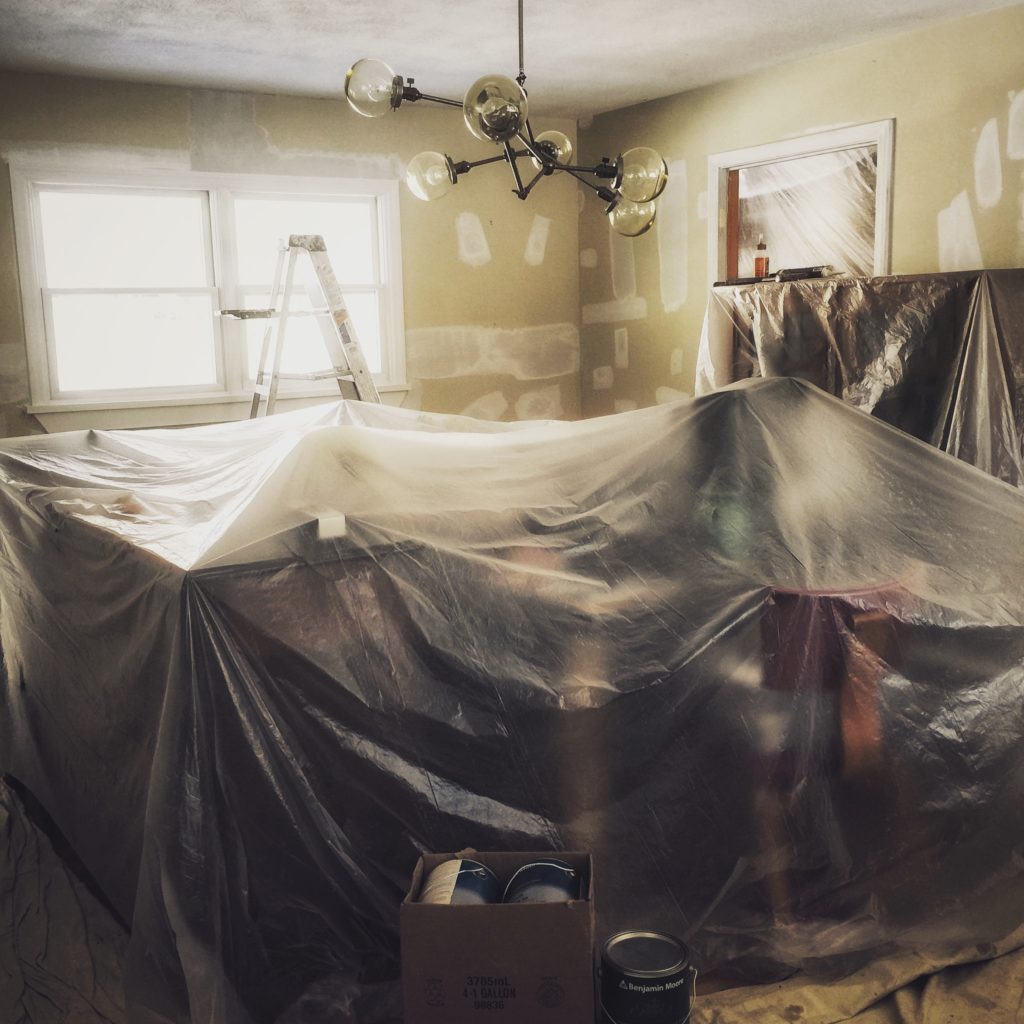 We have been living here for thirteen years. It sometimes seems like we just moved in; other times it feels like we’ve been here forever. Four books written by me, hundreds of books designed by Susan, roughly eighty books edited by me. Three dogs, seven cats, although thankfully not all at once. Over the years, we have lost all of Susan’s aunts (there were five when I joined the family in 2000, out of a total of eleven siblings), her Uncle Bob, her mother, my father, who passed two years before we arrived here from Litchfield, and my cousin Harris, who died in 2008. Between our younger cousins, nine babies have been born, four on my side; we have met all but one of them, a handsome blond boy who was named for my father. Early on in our time here, we considered having children of our own, and for reasons both biological and not, we didn’t.

In the evenings, we look across the table at each other; we have gotten a little heavier and a bit grayer. We earnestly, often frenetically, try different diets: Mediterranean, Whole 30, Paleo. We drink less: only on the weekend, or Saturday night, or Friday and Saturday night. Sometimes we succeed; sometimes we don’t. We have accumulated: too many pounds, too much stuff, too many things. We have skinny jeans, fat jeans, the hiking clothes we never wear because we never go hiking, six pair of golf shoes, two sets of clubs, (piles and piles of) books, small appliances (a soda maker, a spiralizer), half a dozen sets of wedding china for twelve from the aforementioned aunts, two sets of silver, thirty-two knives that used to hang off a magnetic strip under the pot rack that holds a dozen or so pans from my life as a professional food person (whatever that means), twenty-seven red-striped cotton Ikea towels that we have stockpiled over a decade, handmade patchouli goat-milk soaps that spawn like bunnies under the bathroom sink, a plastic crate of expired medications for long-healed illnesses, old computer equipment including three non-working printers, my father’s SX-70 cameras for which film is no longer available, my uncle’s pristine Yashica-Mat twin-lens reflex for which film is available, a 1927 Underwood typewriter originally belonging to Susan’s Uncle George, a 1939 Remington Noiseless that had been my Uncle Marvin’s high school graduation gift from his parents and passed along to me by one of his daughters, to whom I no longer speak.

There have been thousands of meals cooked in a kitchen that is still a work in progress. Hundreds of bottles of wine have been consumed, ranging from expensive Bordeaux opened for a birthday celebration to the cheap plonk that my grandmother would have Germanized as pishwasser. I remember only a handful of the good ones; they have retained their importance by connection to an event or to the people with whom we drank them. For years, we saved the corks in a massive green glass jar, as if someday, in our dotage, we might sit down of a quiet evening and review them the way one might look through a photo album: This was the Bandol that we had with Lisa. This was the Brunello that we drank with Porter. This was the Sauternes that we had with Gale. Recently, we discarded the jar and its contents when we realized that the memories were more important than the corks, which were just another thing to keep, although at one point, we did consider making a trivet from the better ones.

We have an issue with things in this house; I attribute it in part to being adult-only-children-without-children (AOCWC), and to the fact that over the last few years we have lost so many people that it sometimes feels incomprehensible.

A small, personal holocaust, a friend of mine once said. You woke up and they were suddenly gone, taken away in the middle of the night.  And so, without siblings in whose faces we might see our pasts, and without children who reflect back to us ourselves and our future, we cling to the representational, the inanimate, the stuff to which we attach memory and meaning.

But there comes a point when this detritus of life begins to pile up; it becomes dangerous. The accretion of things makes it impossible to walk a straight line, to put anything away, to see anything else but history.

Did you just move in, a contractor asked me the other day when he had to check our water tank. When I told him how long we were here, he seemed alarmed.

To be clear: we do not have a Collyer Brothers problem. But when I went downstairs to our basement a few nights ago to get something out of our freezer and found myself face to face with a small, gray nylon sack — the sort a rock climber might use for chalk; I’d never seen it before — filled with ancient pottery chips purloined by Susan’s ex on a southwestern camping trip twenty-five years ago, my heart stopped. A familiar, cold clamp of anxiety seized the back of my neck: I could instantly recall how I felt when this woman threatened our relationship when it was in its infancy. I could actually feel my slightly nauseous response to the every-Saturday-night-at-eight phone calls from long ago; the moments when I’d see her name come up in my email with a coy Hello darlin’ in the subject line; the promise to me that she would never, ever leave us alone, even though she and Susan had broken up years earlier.

It’s just a thing, Susan said, when she saw my face. I’ll get rid of it.

But why do you even have it, I asked. Why is it still here?

Susan pointed around the basement.

Why is any of this stuff still here?

There was my father’s blue metal screen on which he last showed home movies at our house party in 1971, before he knew that his best friend, drinking Scotch in the kitchen with my mother and a neighbor, was driving me alone to an abandoned park every day after school; there was a dust-caked, roll-top cassette case, holding the Memorex tapes of upstate New York shamanic healings that my ex and I made for each other in the 80s; there was a Jack Kramer Pro Staff wooden tennis racquet with a peeling pink gauze grip that, when I picked it up and inhaled, smelled like sweat and Dentyne and the hot clay I kicked up on the courts at Milton Academy, where I played the summer I was sixteen. 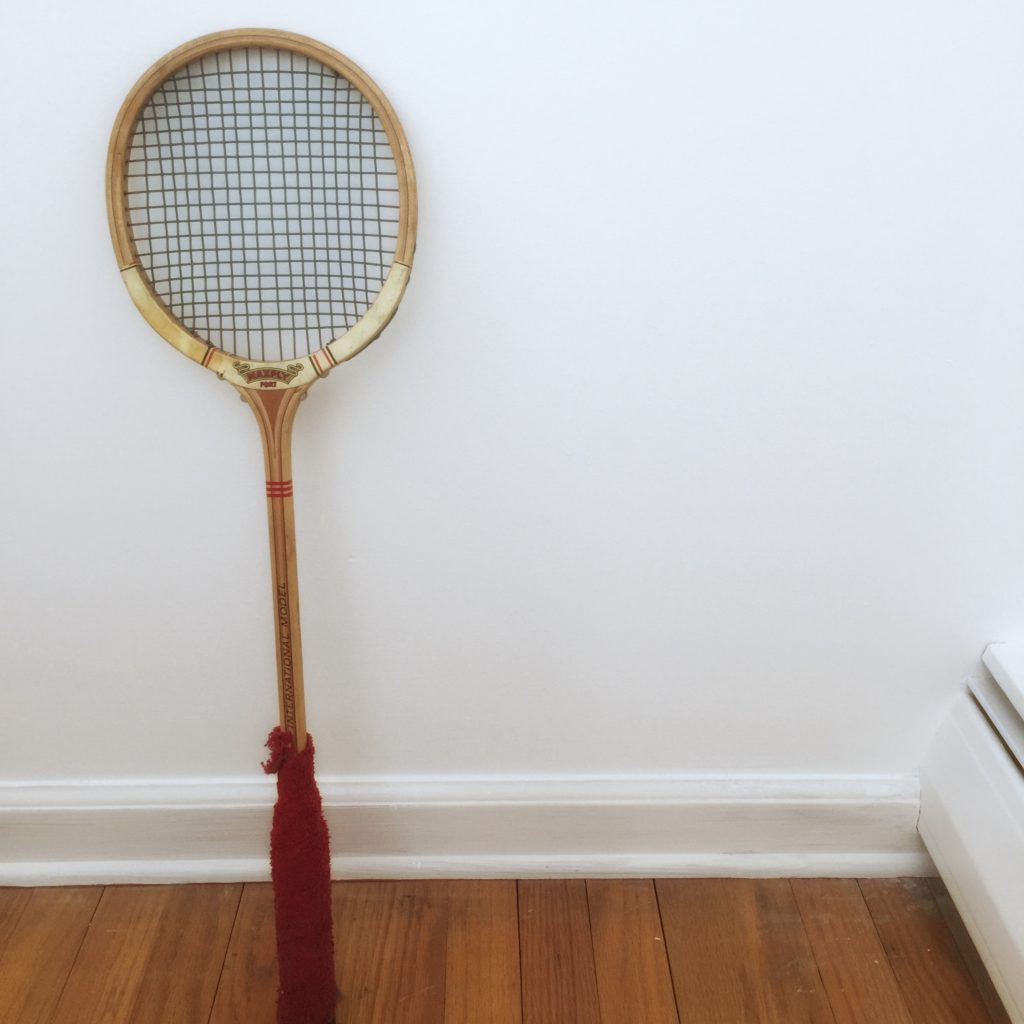 Piles of shopping bags sit everywhere: here are framed photographs of my father’s family, that lined the entry way to my studio apartment in Manhattan, where I lived for nine years. When you walked into the foyer, they were the first things you saw: This is my family, the wall said. This is my blood. I am not alone. Stacks of Susan’s family photos are piled up on our old couch between the oil burner and the washing machine: the aunts are still alive in those pictures — Ethel in her white mink stole on the 1962 Atlantic cruise where Arthur Miller apparently made a play for her; Phyllis in her kitchen, a calendar in Polish hanging over her shoulder; devoutly religious Millie and George at the Connecticut shore in 1937, wildly, carnally, in love. If they are here with us, surely, then, they must still be alive. My college lacrosse stick rests alone on a shelf; I pick it up and cradle it in my arms and it’s 1982. I am nineteen and my father is not yet sixty, and Harris is eight years old. My cousins, alive, dead, no longer in communication, are here with me. Susan’s aunts are here with her. 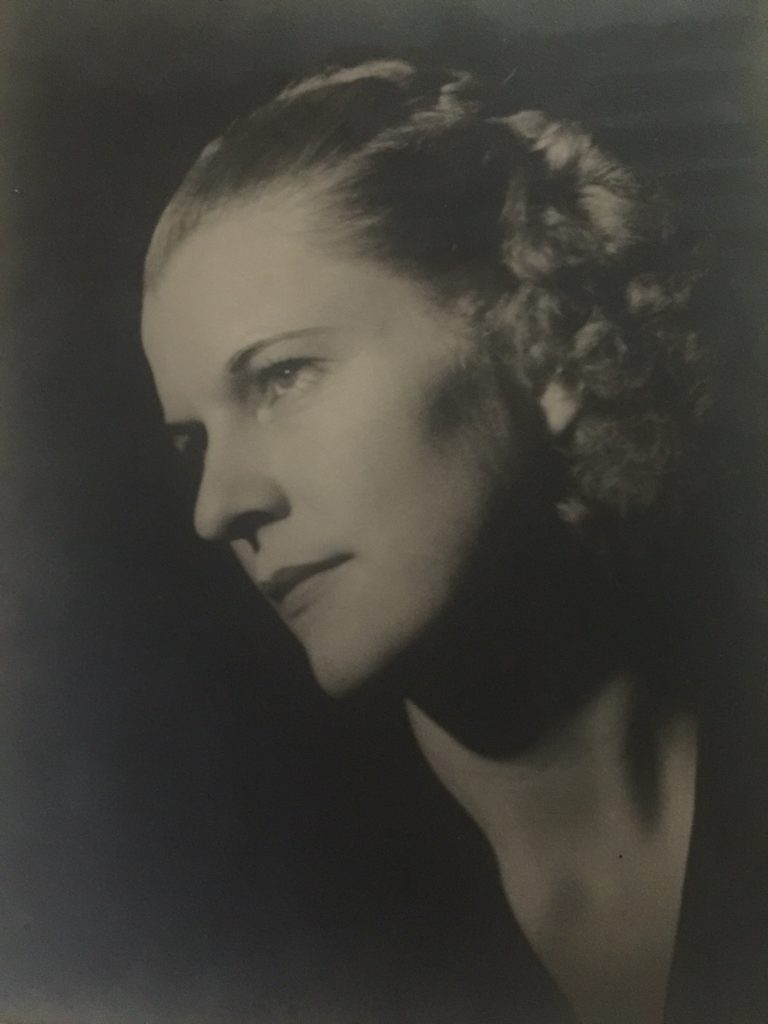 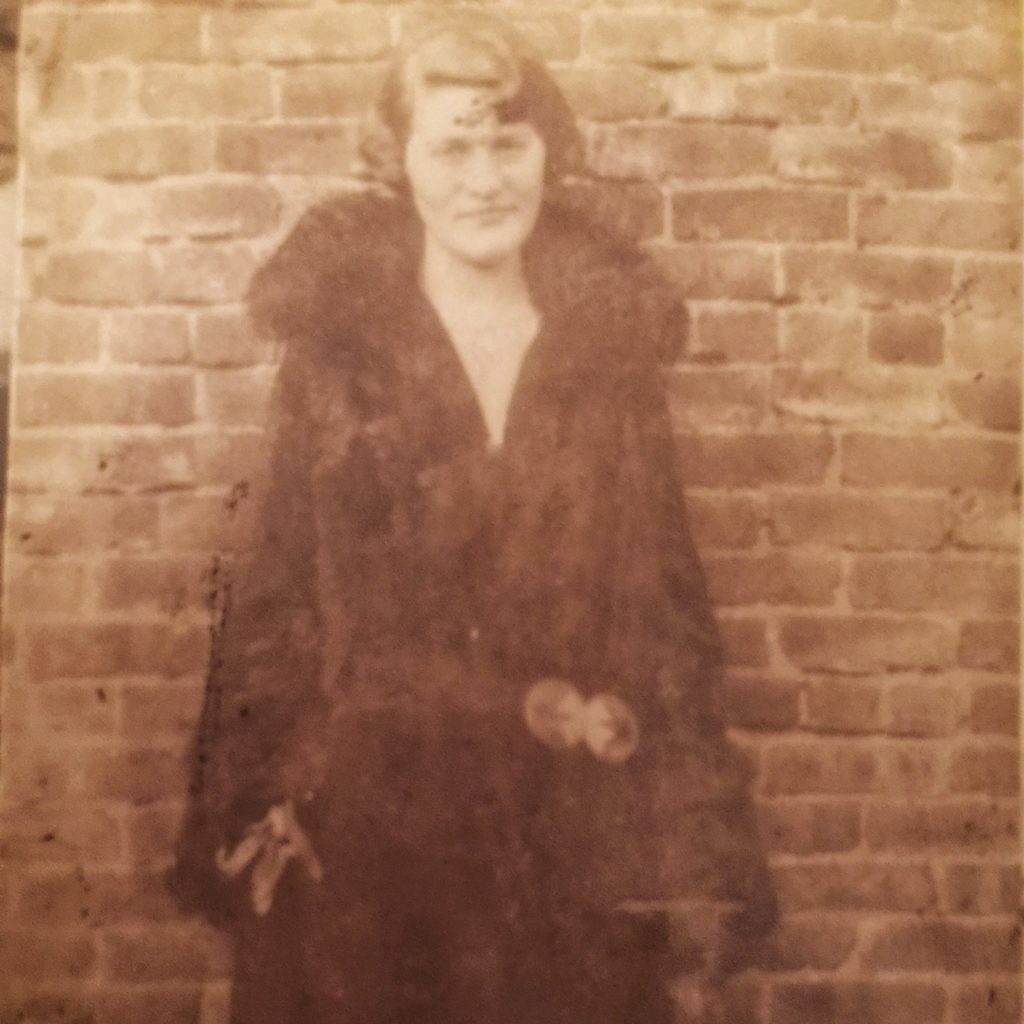 As long as we have the stuff — the photographs, the tapes, the bits of ancient pottery, the corks — time is anchored in place. Or so it seems.

A few weeks ago, we had the entire interior of the house painted. Susan loves color. When I first moved to her house in the country, every room was a different shade of pastel: peach, green, yellow, like a basket of Easter eggs. When we moved in here, she painted individual rooms herself: butternut squash for the kitchen, the guest room a wrought iron gray, the bathroom a weird taupe that never worked with the pea green 1970s tile. After a decade, it felt busy and distracting, a background for the things in our lives that gathered dust in every corner of the house, but mostly in the basement, where no one could see them but us.

I wanted every room to be painted the same color. I wanted the trim the same color, the wall alongside the stairs down to the basement the same color. I wanted my office to be the same, the kitchen to be the same, the den with its brick fireplace: the same. We argued about it. And then we hired painters, who moved everything we owned — the things we carried into our life in this house and dropped like an anchor — into enormous piles in the middle of every room. The walls were painted a bright white, as though the entire house was dipped in promise. After two weeks, it looked clean and fresh and uncluttered, like the beginning of new lives belonging to other people. The things of our pasts, obscured with drop cloths, were suddenly invisible; our stuff was gone, and all we had was ourselves, our home, our name. A blank slate. 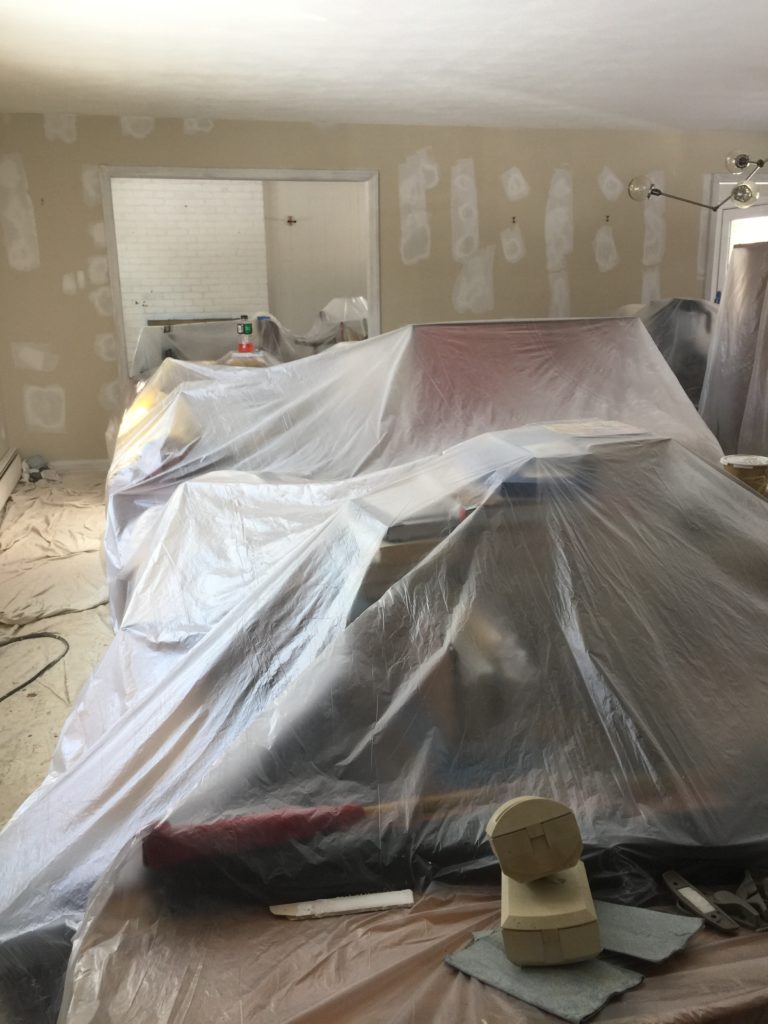 After the painters left, we began to put things away. We stopped. It was overwhelming. A week went by. We couldn’t face the task. What to keep; what to weed out.

I unpacked my office, since it is where I work every day. We hung our entry way mirror and the massive 1929 Italian poster that we bought for the wall above our basement stairs. We put away our pots and pans, and Susan attached a single magnetic knife strip to the wall next to our stove, to hold just five knives, not thirty-two. Everything else is still in boxes. We’re almost afraid to reopen them, to be dragged back into the past and unable to see the future. 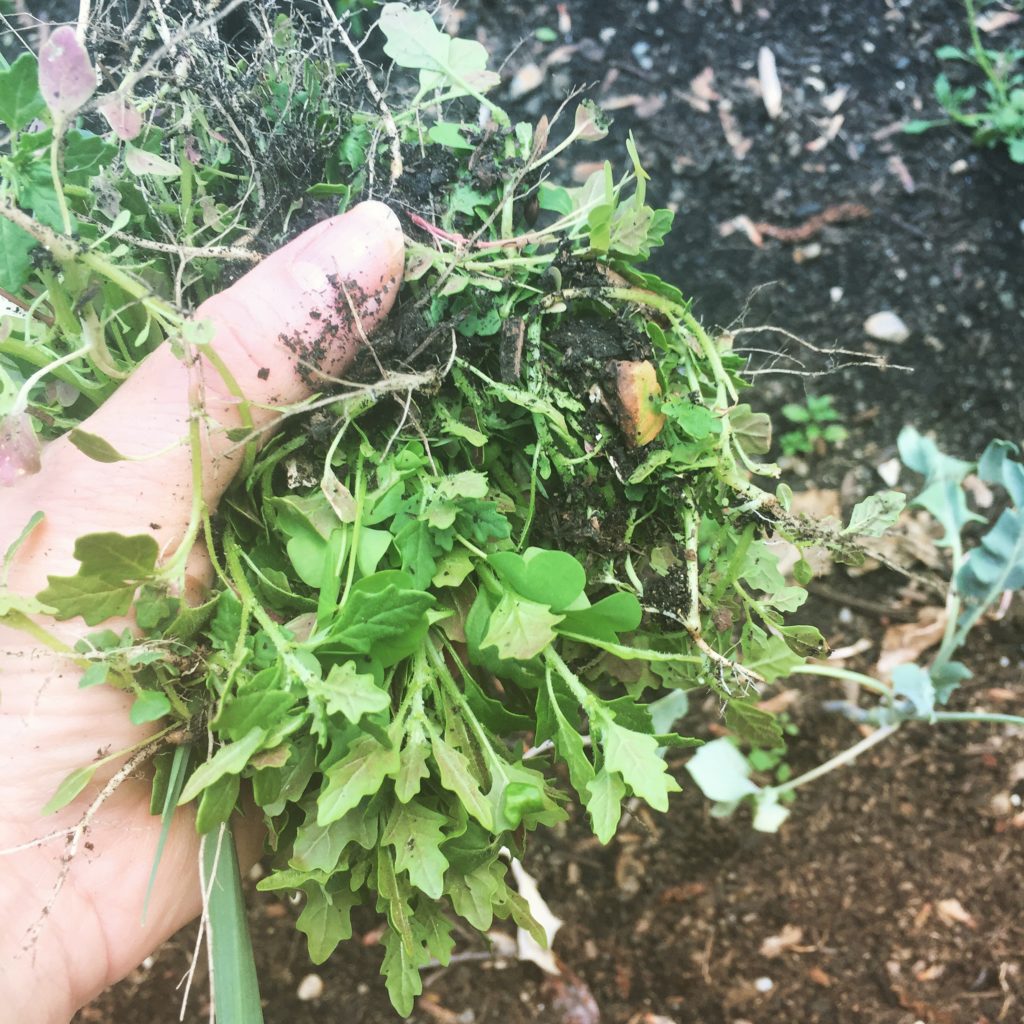 I spent yesterday in the garden, weeding around the raised beds and the four roses that are suffering under the strain of the Virginia Creeper that threatens to strangle and siphon away their nutrients.

Let the Creeper climb the fence, a master gardener friend once told me. It’s beautiful.

But it’ll overtake everything, I said.

You just have to pay attention to it, she said, and not let it get out of control.

We refuse to use garden poison for fear of tainting our vegetables and our ground water. It might kill something we need, something we love. It’s a balance: what to keep, what to pull, what to release. The living versus the dead, the past versus the future. A constant battle against chaos.

What we have, Jane Kenyon once said, is the present. It’s all we ever had, really, except for memory.

How to Celebrate Mabon
admin Jan 27

How to Celebrate Mabon