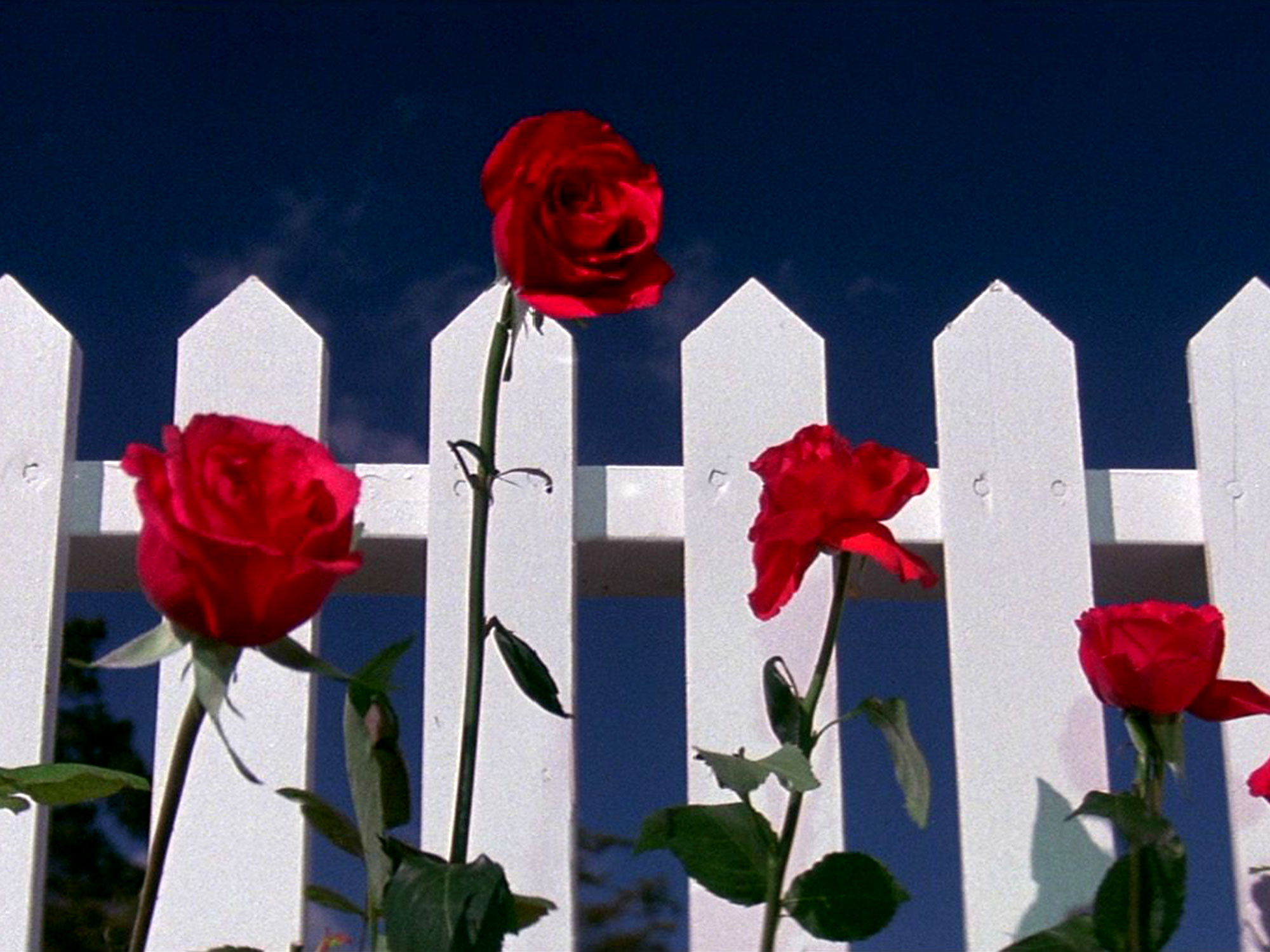 Much like the alleged secret society that runs Hollywood from
the murky shadows, David Lynch’s 1986 masterpiece Blue Velvet
alludes to a sinister underbelly pulling the strings of a scenic
suburban smokescreen. Certainly, this brooding film noir, set to
join
the Criterion Collection in May, pulls back the curtain of the
American dream to expose the evil existing below.

But as Lynch himself once said, “I learned that just beneath
the surface there’s another world, and still different worlds as
you dig deeper.” With his statement in mind, Blue Velvet can be
read as a microcosm of allegorical conceptions used to dispatch
themes on elite occultism. The clues are there; it’s about
knowing what to look for.

Perhaps the key to unlocking these hidden messages can be found
within the opening scene, one that foreshadows the ruthless
dissection of Americana to follow. A nostalgic montage of blue
skies, red roses and white picket fences is backed by the crooning
of Bobby Vinton, only to be crushed when an old man suffers from a
seizure and falls to the floor.

While he writhes in pain, a dog’s bark turns into a demonic
howl as the camera travels through the grass to reveal a writhing
mass of beetles and soil. Since its release well over 30 years ago,
critics and academics have accepted the imagery as a sombre
meditation against the idea of perfection; just beneath the surface
resides destruction and decay.

And yet, straight after these scenes we’re introduced to our
scopophilic protagonist Jeffrey Beaumont (played by Lynch’s
acting bulwark Kyle MacLachlan), the son of the hospitalised
gardener whose discovery of a human ear draws him into the dark,
twisted world of tortured lounge singer Dorothy Vallens (Isabella
Rossellini) and Oedipal sociopath Frank Booth (Dennis Hopper).

The severed appendage, and subsequent unravelling of the mystery
surrounding it, suggests the sinister hermetic stirrings were in
plain site this whole time, exposing the duality synonymous with
the iconic occult phrase “as above, so below”. These words
accompany French occultist Eliphas Levi’s image of the symbolic
deity Baphomet pointing upwards with the right hand and downwards
with the left, drawn from the ancient works of Hermes
Trismegistus.

In investigating the opening scenes within this context, the
plot reveals itself as more than a commentary on good versus evil;
the infiltration of esoteric imagery seems to suggest a secretive
force governing the modern world out of public view. Note the
seemingly innocent fireman holding his left hand downwards, his
right pointed towards the sky as he waves, the red truck and
black-and-white Dalmatian beside him indicating the colour palette
of satanic ritualism.

The surrealist nature of Lynch’s craft muddies the water in
terms of analytical speculation, and yet certain clues appear
clear-cut, particularly the first shot of colour: a bed of red
roses against a white picket fence. Although, to the casual eye,
the virtuous image signifies a hyperbolised vision of Americana,
look a little closer and you’ll seen an undeniable parallel to
the Rose Cross of the cultural and spiritual movement
Rosicrucianism, a combination of occultism and other religious
practices.

The stage is thus set for Jeffrey to become much more than a
student caught in the middle of a whodunit. As he later admits to
Sandy (Laura Dern) over a Lynchian diner lunch, “I’m seeing
something that was always hidden. 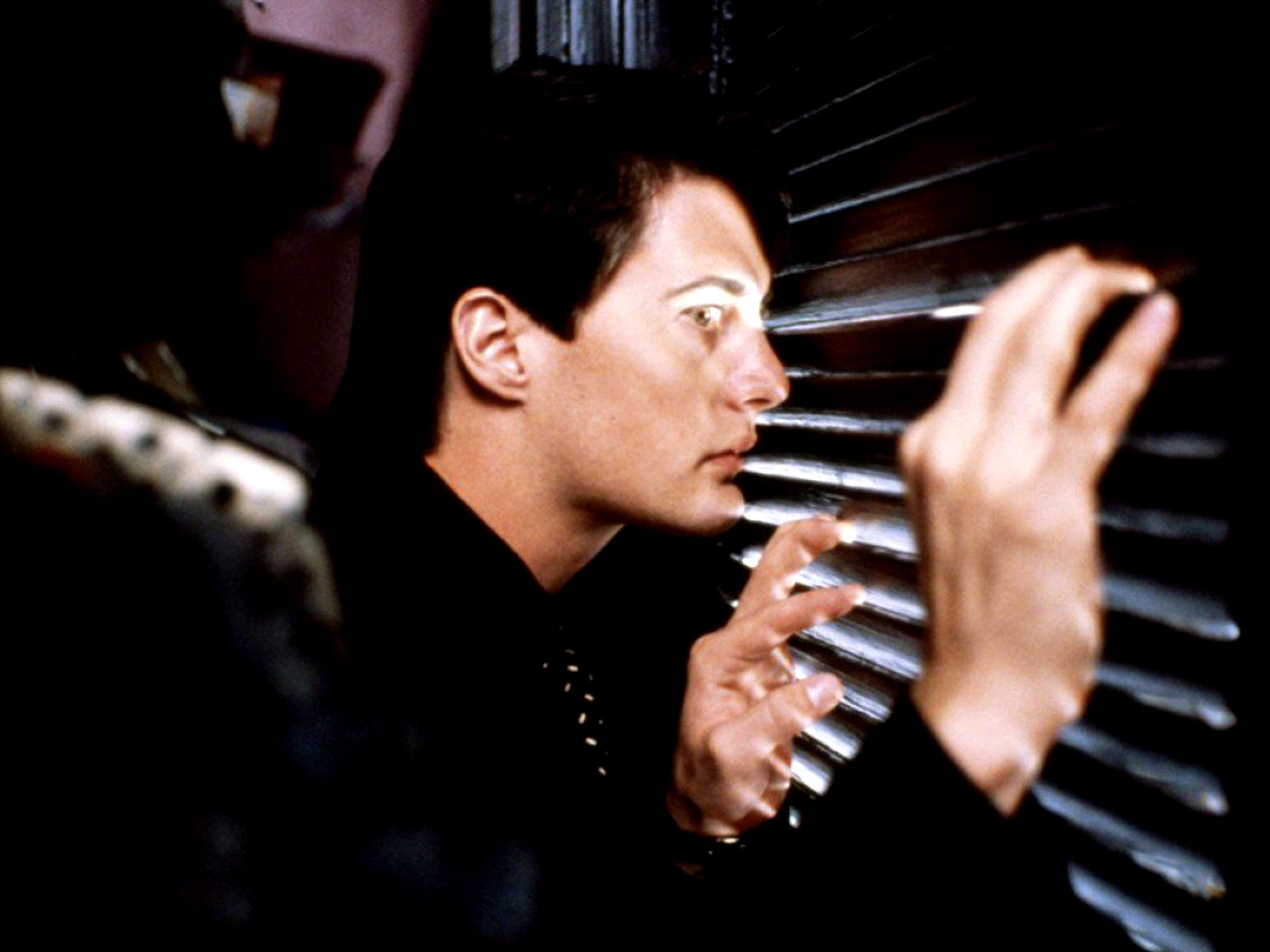 Certainly, from the moment he dares to enter Dorothy’s
apartment, Jeffrey sees more of this hidden world than he bargained
for. We’re made to know her den of the damned can be found on
floor seven, a number symbolising the perfect connection between
the macrocosm and microcosm, taking us back to the acroamatic
perception of duality. Here the character unexpectedly witnesses
the brutalisation of Dorothy by the violent tyrant Frank, who
carries out a ruthless pretence of an incestuous act which echoes
arcane ritualistic practices.

For centuries, the macabre ceremonies of the satanic sect have
remained a mystery for mainstream society, and yet Lynch reveals
the full show through Jeffrey’s watering eyes. From the drink of
bourbon to the purpose of the blue velvet robe, every action is an
element of some rehearsed communion, the singer sacrificing herself
to the perverse sexual desire of her captor in a bid to save her
son.

The shamanic nature of ritualistic tradition comes under further
scrutiny by Frank’s obsession with Roy Orbison’s ‘In
Dreams’, particularly the lyric “candy-coloured clown they call
the sandman”. The ballad signals the start of a ceremony; just as
Dorothy knew to rush for a glass of bourbon, Frank’s cronies
scurry to hit the play button whenever he demands the
candy-coloured clown.

Unfolding within the backdrop of the dreamlike portrayal of
suburbia, these black magick practices arouse fear, confusion and
awe. Just like Jeffrey, we’re left peeking through the slats of a
cupboard at something we’re not quite sure we’ve just seen.

While he tries to make sense of it all, it’s in dreams, as the
song prophesied, when the subconscious takes centre stage. Just as
was done with Bob in Twin Peaks and Marietta in Wild at Heart,
Lynch introduces fire as an ominous symbol. Set against a demonic
rumble, the candle’s flame is snuffed out when Jeffrey succumbs
to Dorothy’s request to hit her – darkness manifests as he
takes an active role in the ritual, no longer an innocent
bystander.

In occultist theory, fire is the key spiritual element; it is at
once the purifying light of heaven and the destructive fuel from
hell. In this sense, fire illustrates the rampant duplexity evident
throughout the film. It is the heroic deeds of our Heineken-loving
hero and the insidious procedures of the sociopathic Frank. It is
the blue hues of Dorothy’s robe and the stark red of the club in
which she sings, the black attire of Jeffrey against Sandy’s
pastel pinks and whites.

This push-and-pull continues right up until the closing scene
when Sandy’s delusional vision comes true. Frank is defeated,
Dorothy is reunited with her son and the picture postcard
equilibrium is restored. Yet there’s a sense of fragility about
the scene, that this dreamlike portrait could come crashing down at
any moment.

In Blue Velvet, Lynch has constructed a hermetic terrain where
masked secrets are allied to the mysteries of the modern world.
Although ambiguity is a prerequisite of any Lynchian work, if we
approach the film with this perspective, the complex arrangement of
systemic ideals at least asks us to acknowledge an unknown reality
existing beyond our normal senses. Unlike Jeffrey and Sandy,
we’re awake to the bug-infested world below.

Criterion’s Blue Velvet DVD and Blu-ray will be available for
purchase on 28 May.

Tags:
Previous Article
How to Set-up and Run a Yoga Retreat: Research and Planning
Next Article
Ayahuasca: 9 Common Misconceptions About the Ancient Visionary Plant

Jet may have run out of time for a revival

Ayahuasca: 9 Common Misconceptions About the Ancient Visionary Plant
admin May 25