FACT OF THE DAY: Having sex just once cannot make a baby according to some cultures – they believe that a couple needs to have sex repeatedly over a number of days or even weeks to create a foetusOk so before you get too excited, you may have gathered that we’re talking conception here, rather than satisfaction…Here I will be describing the “keep having sex every day until you’re sure you’re pregnant” approach, as followed by quite a number of cultures around the world.This is in contrast to the rather less exciting general advice given in the West to have sex during the 3-5 days around ovulation each month – on average most couples following this advice will get pregnant after 6 months. In a previous post #11 we found that the Inuit believed that a couple needed to have sex many times to achieve a pregnancy. This was why they didn’t think that a one night stand with the Shaman could be the reason the wife got pregnant. For actual conception, the father was believed to create the foetus with numerous deposits of semen over several weeks. (http://pregnancyandchildbirtharoundtheworld.blogspot.com/2011/11/11-would-you-have-affair-to-get.html)I have found a few variations on this belief around the world, where conception is only believed to occur after having sex lots of times.The Seri live on the dry hot western Coast of the Gulf of California in Mexico. Like other North American Indians they used to live as nomadic hunter-gatherers and fishermen and numbered many thousand. The remaining 500 or so are fairly Westernised, but have kept many traditional beliefs in the supernatural, with a shaman who mediates between the spirits and the people. Traditionally the Seri believed there was a little pouch inside the womb which had to be filled up with semen before conception could occur. The couple had sex a number of times and the semen collected in this little pouch over the days or weeks. Once the pouch was full, it was believed that the baby’s spirit, a ‘little winged thing’ which only the shaman could see, flew down and entered the woman’s body creating a new life. 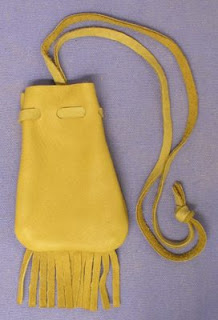 Do you think this is the sort of pouch the Seri imagined?Once they start trying for a baby, the Kiliai believe a couple should keep having sex every day until the mother feels the baby kicking (note that kicking is not normally felt until 16-20 weeks into pregnancy, so that’s quite a lot of daily sex!). This isolated and small group from Papua New Guinea numbering less than a 1,000 are known for the large men’s house in each village where all the unmarried men live. They believe that a baby is made entirely from its father’s semen – which is possibly why so much of it is required – whereas its mother’s contribution only begins after birth through the act of breastfeeding. 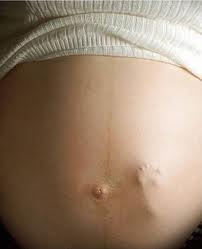 A Kiliai woman would have to wait for this feelingbefore she could stop having daily sexI will include one final example which was observed and written by Margaret Mead in 1935 (one of the first female anthropologists). She did loads of research in Papua New Guinea among numerous different tribes, and was particularly interested in their attitudes to sex. These are her words:“The procreative task of an Arapesh father is not finished with impregnation.  The Arapesh have no idea that after the initial act which establishes physiological paternity, the father can go away and return 9 months later to find his wife safely delivered of a child. Such a form of parenthood they would consider impossible, and furthermore repellent.  For the child is not the product of a moment’s passion, but is made by both father and mother, carefully, over a period of time.  The Arapesh distinguish two kinds of sex-activity, play, which is all sex-activity that is not known to have induced the growth of a child, and work, purposive sex-activity directed towards making a particular child, towards feeding it and shaping it during the first weeks in the mother’s womb……When the mother’s breasts show the characteristic swelling and discoloration of pregnancy, then the child is said to be finished – a perfect egg, it will now rest in the mother’s womb.  From this time on, all intercourse is forbidden, for the child must sleep undisturbed, placidly absorbing food that is food for it.” So, what do we make of this sexual, or should be call it reproductive, behaviour?It seems likely that it will improve the chances of success – if you have sex every day then at least some of it will take place during ovulation – although sadly no data is available. Although this is not the standard approahc here, couples having difficulty conceiving are recommended by some experts to have sex every other day throughout the month (especially if the woman has an irregular cycle) on the basis that the more sex a couple has, the more likely conception is to occur.It is a pretty logical approach. Let’s face it, conception is pretty mysterious; it takes place out of sight; it is completely unpredictable whether conception will result from any particular sexual encounter; and proof that it has actually happened is only seen or felt some weeks after the event. Without pregnancy tests, this seems a good way to guarantee the right result.It would give people different sexual freedom. One-night stands would not be risky from a pregnancy point of view, and from what I understand generally seem to be pretty acceptable in these societies. Of course once can be enough as some lucky (or unlucky) people find out, and what is not made clear in any of the accounts is what would happen if a woman did get pregnant from a one-night stand when she hadn’t been working on getting pregnant with her husband.﻿﻿﻿ 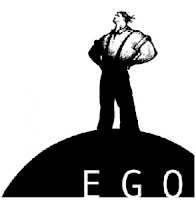 Would he like to think he created a babysingle-handedly?Lastly, it’s my cynical reaction is that this belief probably exists to boost the male ego. It substantially enhances a man’s role in creating the baby – his services are required more than once and each of his daily ‘contributions’ are often believed to form the foetus. It also may provide the more paranoid husband with reassurance that he is indeed the father of the baby.  However, maybe the “keep having sex every day until you’re sure you’re pregnant” approach its worth a try if you’ve already tried the conventional advice. Please let me know how it goes. * * * If you would like to read more for yourself, take a look at;Counts, D (1984) Infant care and feeding in Kaliai, West New Britain, Papua New Guinea Ecology of Food and Nutrition Vol 15 p49-59Mary Beck Moser (1982) Seri: From Conception Through Infancy in Margarita Artschwager Kay (1982) Anthropology of Human Birth F.A. Davis Company : USA Mead, M (1935,48, 52) Sex and Temperament in Three Primitive Societies Lund Humphries : LondonDuncan, P (1972) Nunaga: my land, my country USA : MG Hurtig Ltd