#11 Would you have an affair to get pregnant?

.FACT OF THE DAY: Without infertility treatment, in some cultures sleeping with someone else may be the only way to get pregnant.  At first glance, sleeping with another man to get pregnant seems pretty extreme behaviour, doesn’t it?   However, imagine yourself in a scenario where the following is true; 1. Your marriage is an arranged marriage, rather than a love marriage 2. If you don’t get pregnant, it is very likely your husband will either divorce you or take a second wife 3. Having children and being a mother is literally the only acceptable way of life; not having children will mean you are a social outcast 4. Although women are generally blamed for infertility, you know your husband is the reason you aren’t getting pregnant 5. There is no available infertility treatment for menUnder these circumstances what ‘resourceful’ woman wouldn’t consider the possibility of finding an alternative man to father her child!? I first came across this idea (see the last paragraph of Post #1 http://pregnancyandchildbirtharoundtheworld.blogspot.com/2011/10/pregnant-or-breastfeeding-for-30-years.html) among the Gusii of Kenya, where large family sizes are so important that if the father becomes impotent or infertile after one or two children he will allow/arrange for his wife to sleep with one of his kinsmen in order to keep having more children.I was quite surprised that the man would prefer to have an unfaithful wife than a small family, but I guess it all depends on your culture and what it prioritises. We place a high value on fidelity, whereas the Gusii place a higher value on family size.Without test-tubes and turkey basters, I suppose this sort of arrangement is a natural alternative to sperm donations. The only difference being that the insemination is not artificial for these women….Of course this strategy can backfire, as is nicely illustrated in this story about a Yoruba doctor (Nigeria) “A medical doctor reiterated the story of a man with two wives who had only daughters. He had his sperm tested because he wanted a son. His semen appeared to be infertile. The women both, but separately admitted to the doctor that they had their children from other men. The doctor therefore did not say anything to the husband about his infertility.”I wondered if this happens in any other cultures around the world. So far I have managed to find four examples in very different cultures, each with their own twist. 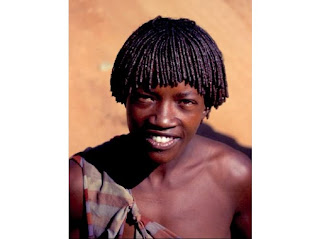 A Bena woman with traditional hairstyleThe Bena people who live in the high mountains of southern Tanzania, have a pretty practical solution to the whole situation  If a newly married couple were having problems getting pregnant, the husband and wife both had sex outside of their marriage to see who was responsible for the problem (the Bena seem to be one of the few cultures that actually entertain the idea that men can also be infertile, rather than automatically blaming the woman). It worked out as a sort of fertility test – the wife went back to her parents’ home and as the author put it “amuses herself with lovers” while her husband stays behind and does the same. If she got pregnant, then the marriage was annulled and she remarried her new lover. If her husband got another woman pregnant then he might remarry, and depending on their affection for each other, the first wife might return to work in the household and help bring up the children. 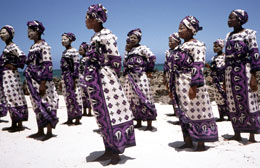 Macua women in tradition dress and white facepaintI found a slightly less open example among the Macua women from Mozambique (a large ethnic group with a population over a million), where most women experiencing problems getting pregnant will try having sex with different men, possibly at the same time as using medical and spiritual solutions (infertility is often believed to be caused by spirits). A researcher spent time in 1997 with 50 married women who were having problems conceiving. Some said that their healer advised them to have sex with other men, others sad they were checking to see if ‘the blood of another man was more compatible’. Their affairs were apparently secret from their husbands, but the women said they were not worried about their husbands finding out as their priority was to have a child, not to save their marriage. Unusually, in Macua society land and lineage is passed down the female line, not the male line. This also means that children stay with their mother after divorce (whereas in cultures of male descent the father usually takes the children) so the women have nothing to lose.As a Macua woman said;”A compound without children is considered a place without pleasure.” 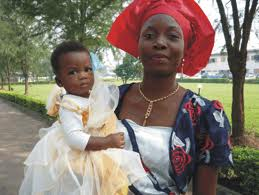 An Ibgo woman and baby ready to go to a weddingIgbo women from Nigeria also had to make difficult personal decisions to achieve a much-desired pregnancy. In the past, if the wife didn’t conceive and she believed she was the problem, she could give her husband bridewealth money for him to buy/marry a second wife and then any children from that second marriage were raised by the barren first wife as her own – a sort of surrogacy arrangement. On the other hand, if the husband was impotent, and the discontented wife complained to his family, they might test her claim by sending a ‘widow’ to see him (by this I think they mean a prostitute of sorts). If the widow’s visit confirmed the wife’s claim, then the husband’s family took the wife to the village shrine to absolve her for the adultery she was about to commit, and a liaison with a man from outside the village was arranged without the husband’s knowledge.

An old photo of an Inuit ShamanAmong the Alaskan Inuit (Eskimo) the affair was not so calcuated. A couple would consult their shaman if the wife didn’t conceive after a couple of years of marriage. During his consultation the shaman entered a trance, where he summoned up the spirits, who helped him take a “magical flight to the moon, where he picked up a child for the woman and hurries back with it”. In Inuit cosmology the Moon Man spirit is associated with fertility and continuity of human life. In return for his shamanistic services he asked for a night in the woman’s bed. The Inuit believe that conception only takes place if a couple have sex numerous times, and don’t believe that having sex just once can result in conception. Rather than linking any subsequent pregnancy to that one night spent with the shaman, they attributed it to his magical flight to the moon.So ladies, if you are one of the 24% of infertile couples whose infertility is unexplained (doctors can find nothing wrong with you or your husband) maybe this would be something to consider…… *  *  *If you would like to read more yourself, take a look at; Culwick, A. T. (1935) Ubena of the Rivers London ; Allen & Unwin Ltd Trudie Gerrits (1997) Social and cultural aspects of infertility in Mozambique Patient Education and Counseling 31:39-48 Traditional Onitsha Ibo Maternity Beliefs and Practices Helen Henderson, Richard Henderson  in  Margarita Artschwager Kay (1982) Anthropology of Human Birth F.A. Davis Company : USA Duncan, P (1972)  Nunaga: my land, my country USA : MG Hurtig Ltd Winny Koster-Oyekan (1999) Infertility among Yoruba Women: Perception on causes, treatments and consequences Journal of Reproductive Health 3 [1]:13-26